At a time when most girls are worried about prom dresses, Lorelei Stamper is worried about losing her skin — literally. Receiving a sealskin from her Aunt, her world is changed. Not only is she a selkie, but she holds the key to breaking a curse affecting all selkie.

Now monsters are stalking her, forcing her to decide if she will end the curse before she even really understands what’s happening. When Declan, one of two bodyguards sent to protect her, wakes her sleeping heart, she must try to balance love, surviving her senior year, and deciding whether she wants to be human or not. No matter what she chooses, the fact remains that breaking the curse demands blood. Hers.

I’ve never read anything involving selkies before, so I thought I’d check out Slack Tide to see what they were all about. If you are as unfamiliar with selkies as I, they are mythological shape shifters who live on land as humans, and live in the sea as seals.  The story was enjoyable, and kept moving at a good pace. While it did have moments of uniqueness, it did fall victim to some of the tropes that plague YA paranormal literature (i.e. irresistible new supernatural guy at school, inexplicable connection/fated-to-be-mated, single parent, semi-absent parent, keeping secrets from the protagonist to protect her.)

Lorelei herself was a pretty flushed out character and a good heroine — brave, able to stand her ground, a little impulsive and just a little overwhelmed at the new direction her life has taken. I would’ve liked to see more development with Declan and some of the secondary characters though, especially Kellan. I think I may have found him more interesting than Declan as he has the potential to be a wonderfully complex character.  Maybe he’ll get his own book?

The world/prophecy angle. I felt I never quite got a good handle on it. I felt as lost as Lorelei at times, and I wish there had been some deeper explanation into this under-the-sea world, Lorelei’s role in it and the politics involved. It was a really interesting world… I’m just not sure the reader gets enough of a glimpse at it to comprehend what’s all at stake.

Overall, if you’re looking for something a little different to curl up with on a cold, rainy afternoon, Slack Tide is a fun, fast read. 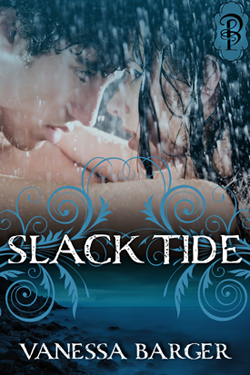