For star-crossed lovers Nimira and Erris, there can be no happily ever after until Erris is freed from the clockwork form in which his soul is trapped. And so they go in search of the sorcerer Ordorio Valdana, hoping he will know how to grant Erris real life again. When they learn that Valdana has mysteriously vanished, it’s not long before Nimira decides to take matters into her own hands—and begins to study the sorcerer’s spell books in secret. Yet even as she begins to understand the power and limitations of sorcery, it becomes clear that freeing Erris will bring danger—if not out-and-out war—as factions within the faerie world are prepared to stop at nothing to prevent him from regaining the throne.[/box]

Now that she’s helped Erris gain a kind of half-freedom from his life of mechanical imprisonment, Nimira begins to wonder if she’s done the right thing. Still partially made of clockwork, Erris’s soul remains trapped in his metal body. Erris begins to grow distant, mourning the life that was stolen from him and the people he’s lost. On the recommendation of their benefactor, Nimira and Erris set out to find the sorcerer Valdana who may have the answers they’re looking for to finally free Erris. But as they search for Valdana, they discover that there are those who also search for Erris – people who are intent on making sure that the lost Tanharrow prince does not reclaim his throne. When Nimira and Erris’s search dead-ends and it becomes clear that Erris’s time is running short, Nimira decides to school herself in the art of sorcery, hoping that her fledgling skills will help her protect Erris in the struggle that is to come.

The relationship tension that Dolamore develops between Erris and Nimira is believable and heartbreaking. It doesn’t feel unnecessary or over-dramatized, instead there are very real and valid concerns that frustrate both of them. They become distanced and awkward as Erris copes and grieves for all that he has lost as well as for the future that awaits him as half a man. Nimira feels guilt over possibly making his situation worse. She fears losing him and fears what will happen to both of them if they fail. They are in constant close proximity as they search for Valdana, but emotionally Erris and Nimira are worlds apart from one another. During this time, Hollin makes a reappearance in Nimira’s life. Lonely and uncertain, she feels a kinship with Hollin due to their similar circumstances, and it’s interesting to see how Dolamore uses this development to grow all three characters and further their relationships.

In addition to some recurring characters from Magic Under Glass, we are also introduced to a cast of new players. Perhaps the most interesting was Ifra, the jinn. Slave to the faerie king’s desires, Ifra is charged with the task of finding the remaining Tanharrow heir and the rightful king of Faerie. I found Ifra to be a very sympathetic character. Bound by a life-long curse to grant the wishes of his masters, his will and actions are not his own. He was trained to bury his sense of violation and distaste, but he fears being asked to do that which goes against his feelings and beliefs. Ifra is a sensitive soul, and yet he is not innocent of the world and the nature of men. His ongoing internal conflict about his situation is understandable and the absence of free will is touching.  It all combines to make him an infinitely interesting character.

As always with Dolamore’s books, she creates such a lovely atmosphere into which she drops her characters. From dark, musty houses full of secrets, to the beautiful, dark forests which serve as both friend and foe, to the gaily-colored world of the fair folk, to the ancient, magical Hall of Oak and Ash, her world is enchanting and delightful. In truth, I’ve always admired Dolamore’s world building. It’s not incredibly complex. It’s somewhat simplistic even, and yet it holds a large amount of depth and detail. She builds Erris and Nimira’s world through her wonderful, almost tangible, imagery, throwing in minute descriptions of the society’s styles and expectations, dropping off-hand references to faraway places and long ago events. These are the details that give the setting age, give it flair and uniqueness. These are the details that give the reader a teasing glimpse of the larger, rich and vibrant world that lies just beyond what we can see.

Something else I love about Dolamore’s stories is that they are fairy tales. However, they aren’t the sanitized version that Disney offers, nor are they the frightening and sometimes horrific tales of the Brothers Grimm. Her stories are filled with that same captivating adventure, magic, intrigue and romance, but it’s tempered with a realism that makes her stories relateable and relevant to modern readers. Her damsels, though they may require help from time to time, are strong, capable and determined. Her princes – both figuratively and literally – though charming, have faults and fears. They are not generic, faceless epitomes of manhood, nor are they mere means of escape from the heroines’ less-than-ideal circumstances. Love in Dolamore’s stories is not just about happily-ever-afters, nor is it always easy or instantaneous. Sometimes it takes work, and more often than not you have to fight for it… and that’s what makes a story worth telling.

Overall, with an enchanting story-telling style that merges contemporary sensibilities and ideas with the magic of traditional, romantic fables, Dolamore has fashioned her very own brand of fairy tale for modern readers that is both lovely and relevant. 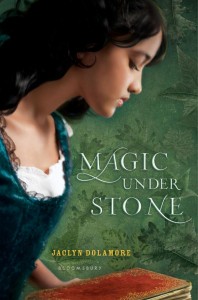