After seventeen-year-old Felicita’s dearest friend, Ilven, kills herself to escape an arranged marriage, Felicita chooses freedom over privilege. She fakes her own death and leaves her sheltered life as one of Pelimburg’s magical elite behind. Living in the slums, scrubbing dishes for a living, she falls for charismatic Dash while also becoming fascinated with vampire Jannik. Then something shocking washes up on the beach: Ilven’s death has called out of the sea a dangerous, wild magic. Felicita must decide whether her loyalties lie with the family she abandoned . . . or with those who would twist this dark power to destroy Pelimburg’s caste system, and the whole city along with it.

When her best friend, Ilven, plunges to her death to escape of life of patriarchal control and arranged marriage, Felicita realizes she must also escape her similar, imprisoning lifestyle. As a daughter of the ruling House of Pelim, she’s lived a privileged, sheltered life – her entire existence governed by the decisions of others. And so, Felicita fakes her death, disappears into the underworld of Pelimburg and takes a job as a dishwasher. Her life is humble, but she’s out from under the thumb of her cruel, domineering brother, for the first time in her life able to make her own choices. When she meets the roguish, streetwise Dash and the quiet, compelling Jannik, her life and choices suddenly become more complicated than she ever anticipated.

Misfortune and pestilence soon fall upon Pelimburg, and the citizens begin blaming the suicides of the two high House daughters for stirring a dark, evil magic up out of the sea. Tension in the city is already running high, stoked by a festering, deep-seated social unrest, and Felicita finds herself torn between her new life and the honor of the family she left behind.

Pelimburg. With beautiful description and wonderful fantasy elements, Pelimburg is a city that Hellisen brings to life vividly. She’s given it depth, history, a mythology all its own, and has filled it with magic and mythical creatures such as selkies, boggerts, and vampires. Her descriptions of life in a seaside city are enchanting, and gives the impression that Hellisen herself is in love with the beauty and mysteries of the sea. However, it’s not all unicorns and rainbows. Pelimburg is also a place weighted by a gritty realism and a dark underbelly that lend interest and controversy to both the setting and the plot.

Speaking of the gritty side of Pelimburg, one of the things that readers may find interesting is Hellisen’s use of morality. This story could have easily been a morality tale, yet it’s not. In fact, it doesn’t make much of a statement on the rightness or wrongness of things in general. But rather, it’s more of a pragmatic view of morality — situations and decisions stated more as fact.  Things simply are what they are. People will inevitably make choices in their lives, be they right or wrong, and there are consequences for those decisions – outcomes that can effect the rest of one’s life and the lives of others as well. Decisions have weight. It’s a heavy book full of things I don’t necessarily agree with, but filled with motivations, choices, vices that make this world – despite it’s fantastic leanings – true to life and give it an authenticity I appreciate.

Felicita. When we first meet Felicita, she is a girl who feels very confined by the patriarchal society of Pelimburg. Women of the High-Lammer houses are virtually powerless, despite possessing their own magical abilities. Her indifferent and sometimes cruel elder brother, Owen, is the head of the family now that her father has passed away, and he, and he alone, has the final say in the direction of her future. Like Ilven, she begins scheming for a way out. Unlike Ilven, she desires to do so while still breathing.

Felicita is not typically the kind of heroine I connect with, but she is a refreshing change from the norm. She’s so very real, so very flawed, and fantastically so. Felicita’s the kind of person who makes her decisions, comes to an acceptance of what her choices lead to – good or bad – and perseveres past the things she cannot change. She’s independent, resolute, is not afraid to stand up for herself, and is a hard worker despite her upbringing. She’s also an addict, a bit immature, makes some incredibly bad decisions, and is not the best judge of character. Yet, I still found her to be likeable; still found myself rooting for her despite the choices she makes. Perhaps it’s because there are consequences to decisions in this novel? Perhaps it’s because she’s a person who was born without the opportunity to truly live? Yes, she makes what I consider to be mistakes, but they’re hers to make and there’s something freeing in that, no matter the outcome. But perhaps it’s also because in Felicita’s character, Hellisen strikes this intriguing balance between naivete and worldliness that keeps her fresh, interesting, and sympathetic.

Dash & Jannik. These boys are like night and day when compared each to the other, but both boys play important roles in Felicita’s new-found life. Dash lives life voraciously. A party boy and a ladies’ man, he knows everyone, and everyone knows him. He’s got many connections in the criminal underworld of Pelimburg, and his dealings are not exactly what one would call “above board.” He’s magnetic, authoritative, a bit dangerous and it’s not hard to see why Felicita would be drawn to him. Jannik, on the other hand, is the exact opposite. Quiet, introspective, practical, with the soul of a poet and full of a magic all his own, Jannik is someone who can empathize and commiserate with Felicita over a lack of freedom and control as they come from similar backgrounds. Being a vampire, an association with him is considered taboo, yet despite convention, Felicita finds him very compelling. Both Dash and Jannik are wildly different from each other, yet both capture her attention and both play a vital role in her journey toward independence.

Overall, with enchantingly vivid world, gritty tone, and fantastically-drawn characters, When the Sea is Rising Red, is a thought-provoking story about freedom and the lengths to which one will go to achieve it.

*** Due to mature themes and references to repeated drug usage, I’d recommend this book to an upper YA audience. 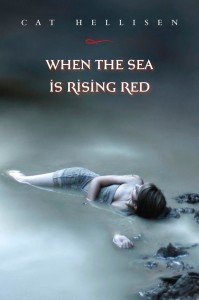 Title: When the Sea is Rising Red