Teens are disappearing in a small river town in southern Ohio as Keira Ryan begins her freshman year. Kidnappings aside, her worries mount as she crushes on an older guy, her best friend starts dating a spoiled cheerleader, and the parents that abandoned her at birth arrive at her doorstep. And, oh yeah, she’s a tooth fairy destined to kick some butt and bring about the end of a royal line of vicious, blood-sucking tyrants. Over the years, humans have pieced together sightings and assumptions to create the myth of the tooth fairy.

As it turns out, they were pretty much wrong.

Freshman Keira Ryan is a tooth fairy.  No, not some pink, sparkly being that rewards children upon that great milestone of teeth lost.  Instead, think more kick-butt action hero devoid of the wand and glittery tulle.  Keira’s a guardian, a guardian of children whom the monsters of childhood nightmares seek to destroy.  As the strange disappearances  of her classmates begin to plague her small town, Keira must claim her birthright and fulfill her destiny to defeat the evil behind the kidnappings… all while trying to navigate the rough waters of romance and her high school’s social scene.

I started Of Sun & Moon excited about the premise.  I mean, tooth fairies?  No one that I’m aware of has done anything with that particular childhood tale, so I was naturally curious to see how Butler would build a story around such an original character.  Let’s face it, if not done correctly, a serious tooth fairy story could quickly become … laughable?  But the explanation Butler gives behind Keira’s duty and purpose was convincing and made sense in the world Butler created.

However, in spite of the original concept and the persuasive foundation Butler laid for what Keira is, the story fell apart for me.  It ultimately comes back to the issue of showing versus telling.  It’s not enough to simply tell a story. Instead, the reader needs to be actively engaged, participating in the story alongside the hero and heroine – to feel, see, hear, smell, taste everything they do. When an author tells me things rather than shows me what I need to know, I find that necessary connection to the story and characters lacking.  I’m on the outside looking in, so to speak — not involved and not fully informed.

This issue has the greatest impact on characterization and relationship development.  At first glance, Butler has created a diverse and interesting cast of characters – she has done a good job differentiating them, making them unique each from the other.  However, because we’re mainly told rather than shown things about them, I never felt like I got to know them very well or invest in them like I hoped.  As a result of not really knowing the characters well on an individual level, to me the relationship development between various people in the story lacked depth and authenticity, and character reactions were sometimes strange and unprecedented.  It was disappointing, because, in my opinion, Butler sets up some interesting relationship dynamics, but the development isn’t quite there.

Other things that fell a little short: plot development and the mythology. Because plot development ties in so closely with the character and relationship development in this book, it unfortunately suffered too.  However, the pacing did keep my attention and moved things along pretty well.  Regarding the mythology that is woven throughout the story, while the concept and explanation of the tooth fairy are original and believable, the rest of the mythology and the rules behind Keira’s reality never seem clearly defined.  It is hard to wrap my head around how her world is structured and how it runs, once again leaving me with that outside-looking-in feeling.

Overall, while Of Sun & Moon has an intriguing premise, boasts an original concept, and promises intriguing relationship dynamics, it’s a novel that would greatly benefit from further character and relationship development. 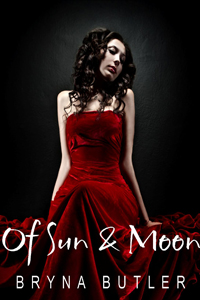