This dark and thrilling adventure, with an unforgettable heroine, will captivate fans of steampunk, fantasy, and romance.

On her 18th birthday, Lena Mattacascar decides to search for her father, who disappeared into the northern wilderness of Scree when Lena was young. Scree is inhabited by Peculiars, people whose unusual characteristics make them unacceptable to modern society. Lena wonders if her father is the source of her own extraordinary characteristics and if she, too, is Peculiar. On the train she meets a young librarian, Jimson Quiggley, who is traveling to a town on the edge of Scree to work in the home and library of the inventor Mr. Beasley. The train is stopped by men being chased by the handsome young marshal Thomas Saltre. When Saltre learns who Lena’s father is, he convinces her to spy on Mr. Beasley and the strange folk who disappear into his home, Zephyr House. A daring escape in an aerocopter leads Lena into the wilds of Scree to confront her deepest fears.  (Goodreads summary)

In The Peculiars, McQuerry has created a fascinating steampunk, alternate history of the American western frontier. In this new time line, some people are born with genetic abnormalities like wings or elongated hands and feet. Rumors abound about a strange land to the north – a land filled with vast natural resources, beasts, criminals and such peculiar people.  These stories are often dismissed by law-abiding, non-peculiar citizens as fantastical tales and the superstitions of gullible and unenlightened people. But Lena Mattacascar knows better.

Lena herself displays physical signs of what her family doctor and grandmother both call “goblinism” in her thin hands and feet with their extra knuckles and stretched out appearance. Suspecting that the father who contributed to her peculiarities and who abandoned she and her mother long ago was in fact a treacherous, morally bankrupt goblin, Lena fears what she might become. As wicked as her father?  Craving adventure and riches?

When she receives a letter that her father, Saul, left to her for her 18th birthday, Lena decides to set out on her own for Scree to search for her long-lost parent. However, as she journeys northward, she gets more than she ever bargained for – adventure, danger and romance in the wilds of Scree.

Lena. Though interested in her story and the eventual outcome, I just couldn’t bring myself to like her. Actually, that’s not exactly true. In the beginning, I thought her very intriguing and was beginning to build that oh-so-important character-reader connection, but then it just kind of fizzled. When the reader is introduced to Lena, she is cautious and distrustful which befits her background and how she views the world. She is someone who is extremely conscious of her abnormalities, and has never felt comfortable in her own skin, especially given that her skin has been cursed with that dreaded genetic trait of “goblinism.” Curious stares and whispers have followed her throughout her life, and besides her mother and grandmother, she’s never closely associated with anyone else because of the barrier her perceived difference creates. She seems strong, extremely curious about the world around her, independent, and appears to have a good head on her shoulders. Good so far. Lena is starting to grow on me.

Then… it starts heading downhill. Lena strikes up an association with a certain character, giving them her trust in a gesture that seems out of step with how her character has been established thus far. It just doesn’t sit well. Her association with this character causes her to make some horrible decisions that have devastating results. The situation that Lena finds herself in could potentially have lent itself to some amazing opportunities for character development, but sadly there are virtually no consequences for Lena’s character. In fact, her rash actions rather serve to further her personal aims. It should matter – what her decisions lead to – but the weightiness of the situation is glossed over and almost forgotten. I guess in the end, I just felt like Lena’s character was really building toward something big – a revelation, an epiphany, maturation – and in my opinion, that didn’t happen. Despite her trials and tribulations, she comes across as shallow, naïve, and perhaps a bit self-centered. Don’t get me wrong, I love flawed characters. I don’t like when those characters show little growth.

Jimson. I found him to be an extremely enjoyable character. His passion for life, for knowledge, his curiosity as to how things work, how he can lose himself in a scientific concept made him interesting. Add in his optimism, friendliness, loyalty and his willingness to see a person for who they are rather than what they are, and he becomes incredibly endearing. He’s braver and more cool-headed in the face of danger than one might initially suspect; just an all-around decent kind of guy who I liked getting to know over the course of the novel.

The world of The Peculiars I found to be a curious one that I’m dying to discover more about. McQuerry drops hints, names and factoids that link our world and Lena’s world very closely. And yet, it’s very different. Little mentions of things here and there that couldn’t or didn’t exist within our history. It’s a strange world that doesn’t lack for description but that also remains frustratingly vague. It is as descriptive and as in-depth as it needs to be, and yet I found myself wanting and needing more explanation behind Scree and why and how these people exist… and also, possibly wanting a map. Add to this the political climate with its slight dystopian vibes and the various social issues the Peculiars raise by simply being, and this odd American frontier with its very peculiar people had my undivided attention.

McQuerry also weaves through the novel several thought-provoking themes. Specifically, that of the question of tolerance, humanity, self-worth, and even civil rights. There are a lot of issues regarding the Peculiars and the treatment of them as second class citizens and sometimes even less that. Because of the setting of the American frontier it made me wonder more than once if McQuerry is making a statement on the United States’ past mistreatment of indigenous peoples and minorities, or if she’s just making a broader statement about how humans treat the things they don’t understand. Either way it’s interesting. Also, an ongoing question in the books revolves around the soul, the nature of the soul, the existence of the soul and who possesses one. Both themes spark some interesting, though perhaps at times forced, philosophical discourse and thought.

Overall, though I couldn’t connect with the heroine in the way I wished to,The Peculiars was still an intriguing story with an endearing male lead, an appealing alternate history, and a world that piques the curiosity. 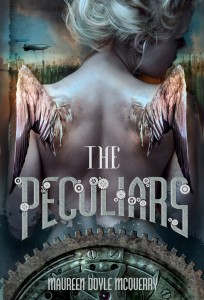