Gemma Hart never knows when her father is going to whisk her back in time. Her toes start tingling and she has a few minutes to find a secret haven where she can disintegrate and appear in another time and place. While “across the line,” her training and skills are put to the test as she completes a mission that will change history for the lucky few her father has selected.

Gemma’s parents are adamant that secrecy is paramount to her family’s safety. If people knew what they were capable of, they could be “used and abused”, as her mother always says. Afraid she might accidentally utter the truth and break the ancient oath of her people, Gemma spends her school days as a loner. Only one thing can throw her sheltered life askew… Harrison Granger.

Harrison never expected to talk to the strange Hart girl, but after a brief encounter he can’t stop thinking about her. He begins a campaign to chisel away her icy veneer and is met with unexpected consequences. As he slowly wins this girl over, he enters a surreal world that has him fighting to keep his newfound love and his life. (Goodreads summary)

Gemma Hart has a secret. A secret she must keep hidden at all costs. One which, if discovered, has the potential to threaten her, her family and history itself. The Hart family are spatia spiritus, time spirits, who can move through time, change the past and have the ability to rewrite history.

After uprooting her family several years prior when she accidentally revealed their secret to her childhood best friend, Gemma vows to never make that mistake again. Not comfortable as the rest of her family seems to be with blatant duplicity, Gemma morphs into the infamous loner of St. Augustine High, refusing to get close or associate with anyone so she doesn’t have to lie or be tempted to tell.

However, when Gemma has a chance encounter with her longtime crush Harrison Granger, Harrison thinks that behind the icy exterior she might possibly be the most interesting girl he’s ever met. He begins relentlessly pursuing her and wooing her, slowly wearing down Gemma’s defenses and finds himself caught up in a web of lies, secrets and dangers he never imagined.

I had a little trouble relating to Gemma. I can’t really pin down exactly why. However, I did sympathize with her feelings of loneliness and feeling trapped in a life she didn’t choose. She’s somewhat withdrawn into herself, is quiet, reserved and presents a prickly, anti-social persona to the world. She’s exhausted by being someone she’s not and from hiding her family’s secret. She longs for freedom and for the power to make her own choices. When Harrison begins to show an interest in her, drawing her little by little out of her shell, Gemma gets a taste of the freedom she’s dreamed of. But because of this, she is also presented with a new set of lies she must now live.

Harrison is the character I found the most intriguing. He’s friendly and an optimist. He becomes absolutely determined to convince Gemma to like him, and his persistence makes him endearing and likeable. He’s definitely the romantic sort, but he’s not perfect. Harrison can be a bit quick to take offense and he’s incredibly stubborn – the other side of that persistence coin. However, this is a trait that also serves him well throughout the book as he proves much tougher and more capable than he initially appears.

Though Harrison and Gemma’s relationship did grow on me, I felt like it got fairly serious, fairly fast. Had it been done a little more gradually or developed a little more, I think I could’ve gotten on board from the beginning, but it took a little convincing for me to buy the immediacy and intensity… though I do have a theory about that.

No. I’m not going to tell you what it is. Read the book.

Although I’m sure it’s fairly obvious by now that I love a good love story, I found myself hoping for a little more action and a few more questions answered in Golden Blood. Pearl has an incredibly interesting premise in her time traveling family who actually changes the future. Typically time travel stories revolve around preserving the time line as we know it – being careful not to deviate from the path that fate has already laid. So how fresh and original to have a concept that completely turns that on it’s head? I do wish there had been more explanation behind the technicalities of Gemma’s gift, as there was almost none. However, Gemma seems almost as in the dark as the reader is concerning how her ability really works.

In general, Pearl raises some interesting questions regarding the “rightness” of what they do, certain characters’ motivations and truthfulness, and about what is really going on. She’s laid a good foundation for the next book, Black Blood, but I still wish that Golden Blood was a little more focused on getting to the bottom of those mysteries rather than primarily the romance. However, I will say Pearl was definitely successful in hooking my interest by preserving the mystery the way she did, and I’m eager to know the answers to all the questions she created.

Overall, with a fresh premise, interesting plot twists and plenty of mystery Golden Blood is an intriguing, fun, romantic read. 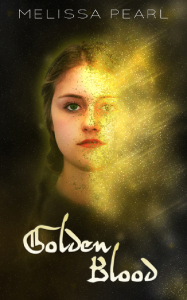