Jennie Townsend is unlucky in love, so she is immediately suspicious when a mysterious new student named Nate tries to gain her friendship. But there is something special about Nate, and in spite of her best efforts Jennie finds her feelings for the boy growing deeper every day.

In fact, Nate is more special than Jennie can even imagine. He is a guardian angel, sent to protect Jennie during a most dangerous time in her life. To do so, he must first become close to her – but not too close. The rules for Protectors warn against physical contact and strictly forbid falling in love. But the more time Nate spends with Jennie, the harder the rules are to follow. Will Nate be able to save Jennie from a premature end, or will his own emotions – and Jennie’s – get in the way of completing the task for which he was specifically chosen?

With Unbreakable Love, Angela Carling has created a captivating story for young adult readers, with a refreshing twist on relationship issues. It is an ode to the magical power of true love, a tribute to belief in a benevolent higher power that watches over us and surrounds us every day of our lives.

While the story of Unbreakable Love was fairly interesting, I found it to be neither particularly engaging nor original. This in part stems from the writing style which I found to be a bit awkward and more middle grade than young adult. There were many instances in which Carling told the reader certain things rather than showing them, creating an environment in which I just couldn’t seem to connect emotionally with both the events of the book or the characters. Instead of a plot laced with bits of foreshadowing, events and themes the reader can begin linking together, Unbreakable Love unfortunately didn’t engage me that way, as for the most part everything is revealed to the reader right up front with little left to subtlety. It could be a preferential difference, but I just don’t enjoy that type of narrative as much.

I also found the characters lacking the depth necessary for me to really invest in them. I liked Jennie & Nate, but their struggles and triumphs don’t have as much emotional impact as they could have if their characters had been more thoroughly developed. Nate is a bit more expanded than Jennie, but for being as old as he’s supposed to be and for all the life experience he’s supposedly had as a Protector, he unfortunately doesn’t communicate the maturity or perspective one would imagine he’d possess. As for Jennie, she was a character with whom I felt distantly acquainted because of the showing vs. telling issue. When a reader is told what a character feels, told how they react instead of being shown, the reader becomes merely a curious, half-informed bystander instead of being a participant who’s thoroughly engaged right alongside the hero/heroine.

For all the issues I had with this book, I will say this: the overall conclusion pleasantly surprised me. Not giving anything away, but I like when authors aren’t afraid to write in unchangeable consequences that are difficult or even impossible for their characters to overcome. Not everything is inescapable and I appreciate that even in a story about the fantastic, that there is that sense of realism. I also liked the way Nate handled Jennie. Their potential relationship is taboo given that he’s a guardian angel and she’s a human. So many of these “we shouldn’t be together” romances have the guy sending the girl so many mixed messages — getting her all turned around emotionally — but Nate admirably does his best to not lead her on even though he’s clearly longing to throw convention to the wind. Lastly, I enjoyed the portrayal of the Townsend family’s relationship with each other. Dysfunction can definitely have its uses in furthering a story and the drama, but it’s a nice change to see a family who actually enjoys all being in the same room together.

Overall, while there were elements of the story I certainly appreciated, it unfortunately wasn’t one I can say I really enjoyed. Unbreakable Love is a story that has potential, but it’s one that could greatly benefit from more development and depth. 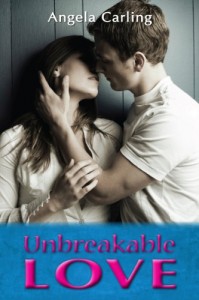 Source: ARC provided by the publisher