Alternating between existing in the living world, with which she’s unable to interact, and succumbing to the horrifying nightmares that plague her, Amelia wanders the banks of a mysterious river without any knowledge of who she is or how she came to be there. The only thing she knows with any certainty is that she’s dead.  Bound to this lonely existence, the passage of time becomes meaningless.

When Amelia finds a boy struggling for life in the dark depths of her river, she is overcome with the desire to save him from sharing her unfortunate fate. And in one, miraculous moment, she does. Joshua and Amelia are instantly drawn to one another, and as they explore the possibilities of love after death, Amelia finds herself trying to protect Joshua from a new threat, the malicious spirit Eli who has his own plans for Amelia’s future. Together, Amelia and Joshua embark upon a quest that will lead Amelia to the answers she seeks regarding her life, her death, the river, and, ultimately, her place in the Hereafter.

This was a beautiful book. I loved it. (How’s that for a review?)

But in all seriousness, this book was a lovely, terrifying, poignant, thrilling, sweet and mesmerizing love story.

Hudson’s Amelia is a very deep, introspective and endearing character. Right from the first few pages I was swept up in her plight and genuinely cared about what was going to happen to her; sadness for her loneliness, sympathy for her confusion, Horror for her inescapable, continual nightmares. She is by no means a helpless character though. Amelia consistently displays a quiet strength, confidence, a sense of humor and a wonderful intelligence. When she meets Joshua, it’s like she’s been awakened from a fog and her world suddenly comes into sharp focus; time once again has meaning. Their love story is sweet and, though perhaps a little rushed, it is one of those relationships that truly encourages each of them to be their best possible selves and you can tell they care very deeply about each other. Joshua is a fabulous leading man. Friendly, handsome and easy-going, he takes Amelia and her reality in stride with such a refreshing acceptance.  But he’s not so nice as to be uninteresting, he’s got a little edge to him too.

However, not everyone is so readily approving of Amelia or her relationship with Joshua. Eli, the aforementioned malicious spirit, is determined to make Amelia his own no matter the cost. I found Eli to be an incredibly fascinating character. He was frightening, repugnant and devious, but still I found myself drawn to him. My heart broke a little for him, and throughout the story I held on to hope that Eli would somehow find redemption, that maybe he wasn’t such a bad guy after all. And that’s all I’m going say about that.  Read it for yourself. <wink wink> Eli is my favorite kind of villain: multi-layered, sympathetic while still being undeniably evil and destructive. The kind of villain you hope for and hope for.

The world of Hereafter was so vividly described by Hudson that I had no problem envisioning it in my imagination. It was surreal, strange but familiar, off-putting yet attractive and I hope we get to visit it a bit more in the sequel.

The story itself was a well-written and compelling mystery as Amelia and Joshua uncover the truths behind their questions and is wonderfully paced as Hudson lets out just enough information to keep the story at a building simmer until it finally comes to a boil in an exciting and satisfying conclusion.

My Verdict? Read Hereafter. It rocked. It’s definitely one for the keeper shelf. 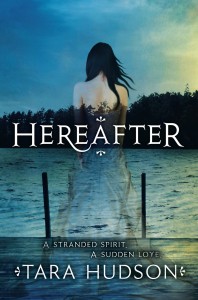