The night that Heaven lost her heart was cold and moonless. But the blade that sliced it out was warm with her dark blood…

David Pettyfer is taking a shortcut over the dark rooftops of London’s brooding houses, when he literally stumbles across Heaven: a strange, beautiful, distraught girl who says that bad men have stolen her heart. Yet she’s still alive…

And so begins David and Heaven’s wild, exciting and mysterious adventure – to find Heaven’s heart, and to discover the incredible truth about her origins.

Part thriller, part love story and part fairy tale, this brilliantly original novel from a bestselling German author will take your breath away…

Traversing London via rooftop has become second nature for seventeen year old David Pettyfer. What’s not second nature? Chancing across a beautiful girl in distress on those rooftops who claims that someone has cut out her heart… and not in the metaphorical sense. What she, this girl named Heaven, suggests is surely impossible, and David is convinced that she must be crazy, while also recognizing that she is obviously traumatized, vulnerable and in great need of his help. Agreeing to help her to the nearest hospital, David and Heaven again encounter the men who stole her heart. Their intent clearly malicious, David decides that no matter how crazy Heaven might be, that he must get her away from these men who wish to harm her further. As David and Heaven attempt to discover why these people are after her and how she lives despite her missing heart, David is forced to consider what he knows of reality, who Heaven actually is, and the very real possibility that this crazy, troubled girl has begun to steal his heart as well.

I love Christoph Marzi’s London. Though I’ve never actually been myself, I’m one of those rabid anglophiles who has over-romanticized it so completely that if I were to visit one day, the real London might never even have a chance. Marzi’s London only enables my romanticizing tendencies. From the freeing, fantastic world of London’s rooftops, to the nitty gritty sights and sounds of the London streets, to the gorgeous architecture of the buildings, to the stifling, claustrophobic industrialized efficiency of the Tube, to the quaintness of the local neighborhoods, Marzi’s descriptions of the city bring it life in living color giving him a vivid canvas onto which he paints his story.

The story of Heaven is told primarily from David’s point of view; a refreshing change from the slew of female narrators that normally populate this genre. David is an individual with a troubled past. At a young age he fled his home due to one parent’s psychosis and the other parent’s inability to deal with the issue. He made his way to London where, homeless and penniless, he made a string of rather poor decisions and judgment calls. Then one day, he acted upon an impulse and found himself working in the bookshop of a Miss Trodwood with a home, a benefactress and the opportunity for a fresh start.

Marzi’s development of David is fantastic and thorough. Though not your standard issue White Knight, David is streetwise, resourceful, practical and shows a presence of mind and a stubborn resolve even in the face of danger. Though initially perplexed by what to do with Heaven, he recognizes in her someone who desperately needs his help. He’s just a normal guy – an unlikely hero – but kind, decent and stronger than he imagines himself to be. Given his back story and overall development, David’s a well-rounded character who I enjoyed getting to know.

Heaven, on the other hand, is more of a puzzle. Obviously, the huge mystery of the book is trying to discover who Heaven is and why she’s not currently in a morgue drawer at St. Mary Abbotts. Perhaps it’s because we’re viewing her through David’s perception of her, perhaps it’s because she’s supposed to remain slightly on the mysterious side, but Heaven is not as easy to relate to as David’s character is. The reader is given brief glimpses into her past and she’s clearly independent, passionate, a free spirit who’s confused and searching, but her character is a bit lacking in depth for my taste.

The story itself is pretty entertaining and fast-paced as the reader follows along with David and Heaven’s attempts to uncover who she is and why the people who stole her heart are still pursuing her. Throughout their investigation, it’s interesting watch Heaven and David form a fledging relationship that’s born out of shared heartaches and experiences. As they start zeroing in on the answers they’re looking for, Marzi picks up the pace, culminating in a pretty nail-bitingly exciting climax. On the downside, a couple plot points throughout are a little convenient, coincidental or require a bit more explanation, but I still enjoyed the story as a whole.

The villains are particularly interesting. Specifically, Mr. Drood – as we are introduced to him in the first few pages – is quite chilling. He’s a heartless killer – clinical, calculating, remorseless – a psychopath who takes on a variety of aliases throughout the book inspired by Dicken’s characters. He is a man of extraordinary abilities and Marzi does an excellent job molding Mr. Drood into a terrifying character, creating a real sense of danger in the story through this villain. And I do love a good villain…

Overall, Heaven is a beautifully-written modern day fairy tale about unlikely heroes, freedom, and the undeniable power of the human heart. 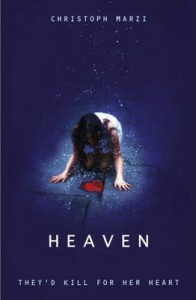