Now the sixteen-year-old is beautiful and hardened, and she’s just stumbled across the possibility of discovering who she really is. She’ll stop at nothing to find her birth mother before Klesko – her dark-eyed father – finds her. Because Klesko will stop at nothing to reclaim the fortune Wally’s mother stole from him long ago. Even if that means murdering his own blood. But Wally’s had her own killer training, and she’s hungry for justice.

The Girl with the Dragon Tattoo for teens, this debut thriller introduces our next big series heroine![/box]

Wally, long unsure of who she is and where she comes from, has abandoned the luxury of her adoptive mother’s Upper East Side lifestyle for a life of her own making. Living on the street, squatting in abandoned buildings, Wally and her street crew of other homeless teens spend their days scavenging for valuable items to sell just so they can get a bite to eat and a warm place to sleep. It’s not a glamorous life, or a life with a lot of guarantees and security, but what Wally’s found with her crew of Tevin, Ella & Jake is family, a sense of control and an assurance of where she fits that she wasn’t able to find back on West 84th Street. However, when ghosts from her past begin to surface — clues that hint at the whereabouts of her birth mom and that promise much-needed answers — Wally begins a thrilling and dangerous search into the dark and dangerous secrets of her mother’s past.

On the one hand, Wally is a character that the reader is given a chance to know very well over the course of the novel. She’s an incredibly strong character, not without her weaknesses, but she’s determined not to let her weaknesses conquer her. She’s fiercely independent, skeptical (but not jaded), shrewd, cautious, practical, and principled. She’s extremely loyal to those she cares about, and a natural leader. Yet, while all these qualities of her character make themselves apparent, she’s a person who’s also extremely hard to know. For the most part, Wally largely remains emotionally closed off to the people she cares about most – rarely letting them see her for who she is. Perhaps this is because she feels adrift without knowing her true identity and where she comes from. She places a lot of value in obtaining this knowledge and is a bit blind to the the things she already has. Though she cares about her family and friends, she builds walls to keep them – and in some ways the reader – out. I liked Wally, I was intrigued by Wally, but unfortunately I never really connected with Wally throughout the book.

One last, quick note about Wally’s character: I believe Wally is somewhat misrepresented in the book blurb. Though I believe that Wally could someday become a vigilante-like character – the foundation certainly has been laid for that eventuality – that’s not a role she fills in this particular book. Wally plays more of a detective/defensive type role throughout Dark Eyes, rather than an vigilante/aggressive role.

The mystery of who Wally’s mother is and the questions surrounding what happened to her – if she’s still dead or alive – is the real driving force behind the novel. It is an intricate trail of twists and turns that Richter has created featuring a fascinating cast of characters that are employed brilliantly throughout the story. The attention to detail, the way the various pieces of the puzzle all fit together makes for a compelling, well-crafted mystery that kept me guessing and theorizing the whole way through. It’s a gritty, hard sometimes heartbreaking story and one with very real consequences – a fact which lends credibility and weight to the story. For those readers that enjoy a good mystery, Dark Eyes is a dark, intelligent puzzle, and Wally is an intuitive and resourceful investigator.

Though a largely plot-driven novel, I do wish that there had been more emphasis on relationship development, particularly between Wally & Claire and Wally & her crew. This harks back to the comments I made about Wally’s own development. It is clear that Wally cares for Claire, Jake, Ella and Tevin, but there is a little too much telling vs. showing to establish these relationships, and even far too little of that. A few more foundational scenes to establish relationship/character development of these characters in the context of their relationship with Wally would’ve lent this story better emotional depth and resonance. It is rare that I will say this, but even though the characters and relationships aren’t as strong as I normally prefer, the fact that I love the mystery is enough for me to forgive some of what’s lacking in that department.

Overall, Dark Eyes is a gripping, thrilling and gritty mystery about secrets, identity, obsessions and the boundaries one is willing to cross to find the answers they seek.

** Due to some mature content, I would recommend this to an upper YA audience. 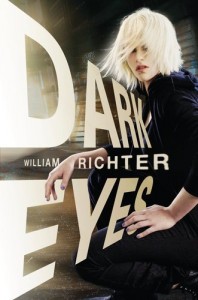 Source:  ARC via Around the World ARC Tours