Salem’s always held sinister secrets. No one understands this better than a sixteen-year-old girl who dies on Halloween night and is reborn a Seer.

The Seer can’t imagine anything worse than being an invisible teenager with enormous black wings. Until she finds out she’s been sacrificed to watch over Locke’s new flame.

Locke Cavanaugh is a Druid, and part of the Order, a clandestine organization entrusted with keeping its members cloaked in the Ordinary world. Physically scarred from the accident that took his girlfriends life, Locke is searching for the OtherWorldly magic that damaged him, because only those without blemish can rule the Order. And once at the helm of the Order he has every intention of finding those responsible for her death.

On the West Coast, Keleigh Flaherty witnesses her parents’ murder by beasts that should only exist in nightmares. She is whisked off to the safety of Salem, where she learns how potent and dangerous her concealed Vate talents are. Keleigh wants to be Ordinary, but when her mother reaches out from the OtherWorld, and implores her to find a forgotten relic she’ll have to use all her ExtraOrdinary powers to locate it.

As Locke and Keleigh join forces, they unravel the Order’s involvement in the witch hysteria and murmurs of a Celtic prophecy. While Locke’s affection for Keleigh blooms, The Seer is torn between her duty to protect Keleigh, and her desire to stop Locke from making the ultimate sacrifice in order to earn Keleigh’s love . . .

But if they don’t find the witches bottle before the ShiningOnes do, someone stalking Keleigh from the shadows will take her instead and plunge all worlds into chaos.

And the winners of the ebook giveaway are…

The world of All’s Fair in Vanities War is one of the most interesting I’ve read about in awhile. Drawing heavily on ancient Celtic mythology and what we know of druidic tradition, Marx has combined this with the American historical accounts of the Salem witch trials to create a rich backdrop full of depth and context. For generations Salem, Massachusetts has drawn powerful magic to it creating a behind-the-scenes division between ExtraOrdinary beings and Ordinary individuals as well as a magical hierarchy of Druids, Vates, Bards, witches and many other magical creatures. Salem’s magical pull comes from the Leyline that runs beneath it feeding the magical energies of the town’s inhabitants. I became so curious about all the mythological elements that Marx used to craft her story, that I ended up spending a lot of time on Wikipedia to see just what was well-known lore and what was all Marx. I must say I’m impressed with how many mythological details she worked into her story to fit her own plot and how smoothly she accomplished it.

The two main characters of Vanities War are also extremely intriguing. Keleigh, the orphaned Vate and female protagonist of this story is a great character. She’s someone who has lost much to this magical world and now wants only to live a normal, non-magical life. And yet, that doesn’t appear to be her destiny. Keleigh is on a search for what she is – Vate or Ordinary – but even amidst her turmoil she has a confidence, strength, courage and kindness that defines the core of who she is. She also has a good head on her shoulders and a quick tongue, which makes her encounters with Locke all the more entertaining. When we first meet Locke, the good-looking, sweet-talking druid, he has lost his longtime girlfriend in a tragic car accident that has also scarred his beautiful face. Long vain and used to getting his way by using his looks, charm and innate power Locke must learn to discipline his use of magic, and begin to heal from the tragedy. Post-tragedy, he’s still a very charismatic character and still makes good use of his charm. He’s got an infectious confidence and an annoyingly endearing swagger. His accident does mature him and realign his priorities; his losses and mistakes have sobering him a bit… but not too much. The thing that really makes him so likeable is that under all the bravado, he really is a decent guy who really does care.

Another major character in the book worth mentioning is the Seer. Killed in the same accident that scarred Locke’s face, she is reborn a Seer – one with the ability to traverse the nine worlds, witness to great events, and a keeper of secrets. She’s of particular interest to me, because although she is omnipresent and the narrator of the story, she really is only a secondary character. The reader sees the entire story through her eyes (she is after all a kind of story keeper), but she plays a slightly less important role in this novel than Locke or Keleigh. It’s an intriguing plot device, one that struck me as pretty unique, and, for the most part, it’s a device that Marx utilizes well. The Seer herself comes across as a very lost character. In fact, we’re never given her name throughout the entire book, a fact which adds to her mystique as well as plays to her uncertainty about herself. The Seer is unsure of her intended purpose. She’s lonely. She clings to shreds of her human existence unwilling to shed it completely and embrace her new reality.  I look forward particularly to more development of her character in subsequent novels.

Story. As I just mentioned, the unique narration style set this book apart immediately, as does the interesting relationship dynamic is creates as you begin to watch Keleigh and Locke’s friendship develop, as you keep in mind that the Seer was formerly Locke’s girlfriend. It just creates some interesting moments and perspective. As far as the mystery goes, as Keleigh and Locke search for the relic, it is very interesting and well-paced, and Marx does a fantastic job of building tension throughout their search. The climax of the novel, in particular is pretty dark, gripping and terrifying. The villain is truly frightening, and the final showdown of the story is just as intense as the climax.

Though I thoroughly enjoyed All’s Fair in Vanities War, there were just a few things that kept it from a full five stars. First, though I love the world Marx created, I wish that there had been a bit more clarity closer to the beginning of the book explaining the structure and rules of this world. Before reading this book, I knew next to nothing about the mythology and lore behind Keleigh and Locke’s world. But it’s almost written as if it’s assumed that the reader has a cursory knowledge of Celtic lore. Don’t mistake me, I love the world, I was just reading in a state of confused fascination for a bit there.  However by the end when it all falls into place, I felt as though I had a pretty good handle on things worked. Second, I love that the Seer plays the role of narrator, and though she does add her own commentary from time to time, I wish that there had been just a but more of it – a little more insight into the Seer and more opportunities for character development. Third, not a fan of the “absent parent” device, but that’s a personal preference, and Marx makes it work for her story. And finally, I don’t normally make mention of this, but there are a few glaring grammatical and spelling errors. Not a lot, but just enough to jar you out of the story. So if that really bothers you, Dear Reader, just be aware. Also be aware that this is a truly great story, and should you decide to pass over this one because of a few errors, you’re definitely going to be missing out.

Overall, with a complex, fascinating world based on Celtic tradition, fantastic characters, intriguing relationship dynamics, compelling romance and an exciting fast-paced plot, All’s Fair in Vanities War is a wonderfully gripping paranormal read that has me eagerly anticipating the next installment. 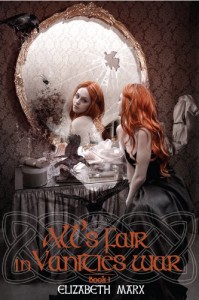 As part of the blog tour, Elizabeth is offering TWO (2) ebooks of All’s Fair in Vanities War to TWO (2) lucky winners.

That’s not all!  As the blog tour’s grand prize, you can also enter to win a $50 Amazon gift card by:

2.  AND posting a line you loved from the book on her wall