Today we’re welcoming Courtney King Walker, author of On The Fringe, to the blog!

And the winners of the giveaway are…

winner of the On the Fringe prize pack

winner of the On the Fringe paperback

An achingly romantic ghost story, On the Fringe is a beautiful story of love and loss, beginnings and endings, life and life after death.  To read my review, CLICK HERE. 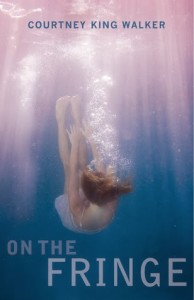 [box]Claire is struggling to overcome the murder of her childhood friend and secret crush, Daniel. Everyone else seems to be moving on with their lives, but she’s still trying to cope. The fact that she finds herself alone and drowning on her 16th birthday isn’t helping.

Beautifully told, On the Fringe intertwines fresh ideas about devotion, revenge, and the consequences that come with life and death.[/box]

A little more about Courtney… 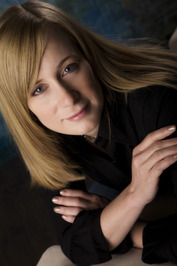 Courtney King Walker grew up Walnut Creek, California building rocket ships and rafts out of cardboard just so she could go to the moon and Niagara Falls. But a trip across the border to Tijuana was as exciting as it ever got.

After being banned from the kitchen after a few too many catastrophes, she discovered a love for writing, music and art, and eventually earned her BFA in graphic design at BYU.

She has lived in St. Louis, Chicago and San Francisco, and now resides in Salt Lake City with her husband and four children where she continues to pursue all things creative, including writing, designing, composing music and baking, with an emphasis on making a killer piecrust. [/box]

1. On the Fringe is such an achingly romantic ghost story. So how did it all begin?  How did Daniel & Claire first let you know that they had a story that needed telling?

It started with a boy, of course.

I thought, what would it be like to have a ‘guardian angel’ who wasn’t really an angel, but who was just someone you’d known your whole life, who died before you?

And what if that someone and you never had the opportunity while you were both alive to figure out you loved each other, but somehow, through some crazy near-death experience, you were given another chance to experience that love, even if it is fleeting?

2. Did you always have an idea of where the story was leading you? Or did your characters or situations throw you any major curve balls during your writing process?

No! Writing On the Fringe was definitely a learning process for me because I wrote it as if I was reading it…if things started getting dull or I didn’t like what was happening, I immediately switched gears, trying to imagine if I was reading this for the first time, what would I want to happen next so I wouldn’t be tempted to put the book down?

I’d say the biggest curve ball I was thrown was by Claire’s older brother, Matthew. I had no idea he would reappear in the story and be a major character until the moment he literally arrived in one scene. I had every intention of leaving him grieving at college. But obviously his connection to both Claire and Daniel played a huge part in the road to redemption for all of them. I’m so happy he demanded his story be told! He is in my very favorite scene.

3. Obviously the themes of loss, grief, closure and healing are a large part of this story. Were these always issues you planned on so frankly addressing? How did this play into your character development? And for teens who might be struggling with similar situations of loss, what is the most important idea you hope comes across in On the Fringe?

I didn’t start out trying to address any themes, other than romance. But I quickly learned that I couldn’t ignore or underplay the consequences of someone dying, especially when that someone is a teenage boy who has been murdered.

During a few of the first drafts, some very helpful people pointed out instances where I’d too easily glossed over the grief. I also didn’t want to dwell on it, either, because that wasn’t the story I wanted to tell. So, it was something I really struggled with. The only grief I ever experienced in my life was when my grandparents’ died, which is just a part of life that eventually everybody goes through.

But because I have many friends who have tragically lost loved ones, their perspective helped me realize that the theme of loss was more pervasive than I’d expected; that this kind of grief is real, raw, and life-altering, and it changes whoever it touches in some way forever. Once I understood the seriousness of that message, it stuck with me and began to thread itself through On the Fringe on its own.

I’d say the most important idea I’d love for teenagers to pull out of Claire and Daniel’s story is that life is fragile but love and memories and relationships are eternal. What we gain in this life is carried with us in some form or another into the next life, and because of that, we are all connected, even when death separates us for the time being.

4. Do you personally believe in a sort of Fringe existence for those people who have passed on before us, but who still have unfinished business here on earth?

In some form, yes.

I have heard too many stories and testimonies of help or peace or love or comfort or rescue with no other explanation other than ‘someone was watching over me.’

5. The romance in On the Fringe is so lovely and bittersweet. As a reader yourself, do you find that you prefer a dash of melancholy in your favorite romances?

I am a total sucker for a certain kind of aching in a romance.

My very favorite romance of all time is Elizabeth & Mr. Darcy. I suppose that is telling, because the two are apart for nearly the entire book. In the most recent movie (with Keira Knightly), at the very end where Mr. Darcy, with his coat undone, comes for Elizabeth in the middle of the field at sunrise and pulls her to him…I have to say is the most gorgeous, romantic, achingly perfect scene of all time. They could never see each other again after that scene, and I’d still be satisfied. So, I suppose it’s not melancholy I prefer, so much as a kind of longing that makes your heart hurt in a bittersweet kind of way. Kind of like a deeply painful but satisfying massage.

6. Do Claire & Daniel have a song? Or what music inspired their story?

I LOVE talking about music because it inspires me so much when I’m writing. I hope you don’t mind me repeating my answer from another interview where I mention a specific song that has really turned into Daniel and Claire’s song. It is called “Middle Distance Runner,” by Sea Wolf. It is a haunting, beautiful song that gets me every time. The lyrics mean something like, he is a middle distance runner so he can’t reach her because she is too far away, so she’ll need to come meet him halfway, instead. That is the essence of Claire and Daniel’s story.

7. In your mind, is there more to Daniel & Claire’s story than what you’ve written?

Oh, yes. I originally planned on doing a sequel, but when I finished, it really felt finished. I decided I didn’t want to ‘make up’ another problem for them to deal with, only to come to the same conclusion (no spoilers here). But—there will always be more to their story in my mind, and at some point I may post on my website other chapters and scenes between Claire and Daniel that didn’t make the final cut.

8. Do you have a current WIP you’re working on? Can you tell us a little bit about what’s next for you?

YES! Exciting stuff, but nothing I want to talk about yet, except I can say it takes place in my favorite city of all time (Chicago), is a little bit of a mystery, and once again a character took me completely by surprise.

Thank you, Dani, for an awesome interview. Your questions were fantastic, and really made me think!

For ONE (1) lucky US follower Courtney is offering a super cool On the Fringe prize pack that includes the following: 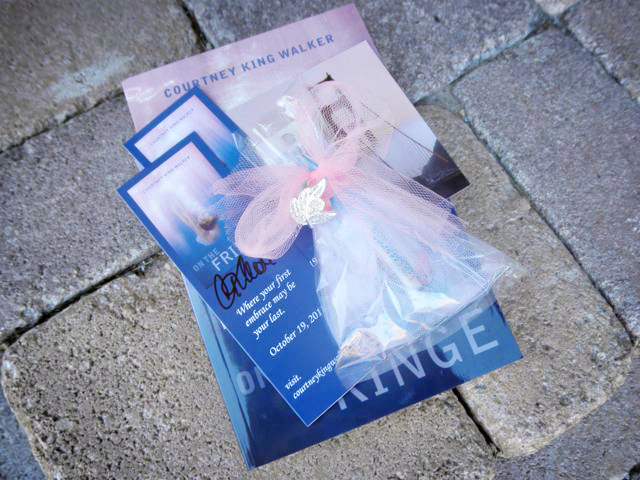 1 signed copy of On the Fringe
2 signed bookmarks
1 On the Fringe San Francisco postcard from Claire to Daniel
1 Cotton Candy Lip Smackers lipgloss
1 silver ring
I will also be offering up ONE (1) paperback of On the Fringe from The Book Depository for all my fantastic international followers.  So there will be TWO winners total.