It is always darkest before the dawn.

Harmonia has certainly found this to be true. She has faced more than any one person, goddess or mortal, should ever have to.

She has lost her soul mate time after time, lies and deceit have surrounded her and in fact, she has even been misled about her very identity. Yet she has always emerged with strength and grace. But now she will face the unthinkable. Her daughter has been taken and Harmonia will risk everything to get her back.

In this epic series finale, all will be revealed. The only question remaining is…Who will be left standing? (Goodreads summary)

If any of you have not read the three Bloodstone Saga books prior to My Tattered Bonds, then this review will most assuredly contain spoilers.

It is always bittersweet when a great series comes to a close, and that is certainly true for The Bloodstone Saga – an intriguing compilation of Greek myth, historical event, and time-honored legend. Full of spine-tingling romance, epic quests, betrayals, journeys, ancient prophecy, gorgeous goddesses and handsome heroes, this series is an original read.

At the conclusion of With My Last Breath, Harmonia has succeeded in rescuing her beloved Cadmus from the clutches of the Keres sisters and has obtained Zeus’s sword. She’s one step closer to fulfilling her destiny as the Chosen One – overturning the devious actions of the Fates and restoring Olympus. And yet, by setting things right in her life as Heleyna, she’s lost one of the most precious things in her life – her daughter Raquel. Still searching for the lost Olympians and frantic to find her young daughter, Harmonia’s quest leads her to the gates of the Underworld and beyond. There she discovers new dangers, new tests of her strength and finds just how much she’s willing to sacrifice to save the people she loves.

Once again, Cole has successfully transported me into her realm of myth and legend. My Tattered Bonds takes place mostly in the Underworld, the whole concept of which fascinates me. The Underworld is a whole subterranean world guarded by Cerberus, inhabited by the dead, and ruled over by Lord Hades. Yet the living can venture there… if they dare. The Underworld of My Tattered Bonds is vivid, beautiful and alluring, but it is also horrifying, vicious and unforgiving. It is this contrast, that also appears throughout the themes in original Greek mythology, that appeals to me. The love of beauty, the power and tragedy of love, the harshness and permanence of consequences, the unyielding set of rules that govern man and god alike, the idea that fate cannot be changed, and man’s never-ending quest to do exactly that.  Cole’s mythology also incorporates these ideas and this is perhaps the reason I enjoy this series as much as I do.

Throughout this series, Harmonia has grown on me. Cursed, betrayed, and misused time and time again by the Fates and the Keres, she’s continually maintained a wonderful sense of dignity, decency, strength, determination and a strong moral compass throughout her many ordeals. She’s the goddess of peace and yet her life often doesn’t reflect any kind of serenity as it has been in a state of constant upheaval for lifetimes upon lifetimes. Harmonia is a strong female character, but she also recognizes the value of depending upon others, that she can’t do it alone. She’s also an extremely understanding person whose empathy toward certain characters in the book is refreshing and commendable. She is the goddess of peace after all, but there were certain situations in which her reactions to things took me by surprise, in good ways that made sense for her character, and I just really enjoyed that. All in all, Harmonia’s gigantic reserve of inner strength, her compassion and her genuineness of character made her a lovely protagonist to share adventures with.

Storywise, there are a lot of elements I enjoyed in this novel. Topping the list is probably the character of Hades. Cole’s Hades is seductive, demanding, charismatic, he craves beauty and desperately desires the things he cannot have. He subscribes to his own moral code and his own philosophy of love. As I’ve probably stated before, I love characters that live in the moral gray, because they are just so interesting – their motivations and view of the world just so different from the accepted norms. Other characters that I’d love to know more about are Hecate, Empusa and their tragically strange family situation/relationship. Luckily, I will get that particular wish, because Cole has just released the first book in her new Moonstone Saga which happens to star <drumroll please>…. Empusa! One last thing I enjoyed was the quest/journey aspect of My Tattered Bonds. The characters are constantly on the move and in true mythological fashion, undergo trials, complete quests and must fulfill destinies.

I have to admit, this final book did send me on a bit of a Wikipedia rampage. I have, what I consider to be, a decent knowledge of Greek mythology, but I had no idea how many details in the Bloodstone Saga are straight from or are inspired by original myth. Cole has certainly done her research to give her saga a solid foundation and yet she’s successfully molded certain established elements of these ancient stories to fit her own unique vision.

Despite all the things I previously stated that I did like, there are several things I was not so crazy about. The first and foremost that there seemed to be several plot holes, things that seemed a little too convenient, and alternately, things that may have been made overly complicated. Nevertheless, the book still is extremely enjoyable.

Overall, My Tattered Bonds is an exciting, romantic, adventurous and fitting conclusion to this wonderful series. 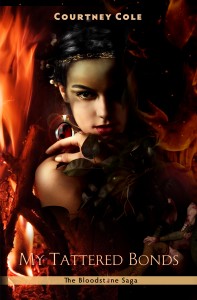