18-year-old Jonathan Harker is diagnosed with a rare blood disorder after visiting a Romanian Count. His girlfriend Mina and a pre-med student named Van Helsing team up to investigate the source of the disease. The teenagers discover a horrifying truth: the Count is a vampire. The harrowing events unfold through emails, text messages, web pages, Twitter feeds, and instant messaging—the natural modernization of Bram Stoker’s original Dracula, which was written in letters, diary entries, and news clippings. (Goodreads summary)

Every time I think, “Man, I’m so OVER vampires.” I seem to pick up yet another book that features more mythological blood-sucking creatures of the night. Perhaps I’m just not as over them as I imagine myself to be. Perhaps they are my peculiar form of bookish Kryptonite. In any case and for whatever the reason, I’m glad I picked up iDrakula.

Ashamedly, as much as I read about vampires, I’ve never actually read Bram Stoker’s Dracula. I’ve seen movies, I know the plot and the players, but I’ve never actually picked it up and read the granddaddy of all vampire books. An oversight I hope to rectify soon. So that stated, as far as in depth comparisons go for the purists among you, Dear Reader, I won’t be able to give any. However, based on my knowledge of Stoker’s Dracula, Black has written a smart and innovative homage to this gothic classic. Originally written in an epistolary format (i.e. letters, journal entries, etc.), Black has modernized the story, making it relevant for 21st century teenagers by telling her vampire tale via text messages, emails and occasional iPad web browsing. Not only is the novel cleverly written, but the way the story is presented visually is extremely appealing to my inner wanna-be graphic designer and provides the reader with an aesthetically pleasing reading experience.

Clocking in at 150 pages even, iDrakula is a quick, but intense read. Black keeps the plot moving at a fast clip and the text/email formatting style sucked me right in. It gives off a vibe of the forbidden and taboo, not only from the feeling that I’m snooping in someone’s private correspondence, but also from the sensational events and subject matter of the book. It is creepy, dark and edgy. The twists Black incorporates into the story keep it interesting so that the novel is not merely a predictable, straight retelling. Instead it’s something different while still remaining true to the tone, themes and basic plot of Stoker’s original novel.

The formatting and length of the book had me a little worried that the character development might suffer – I was worried that the stylization and advancement of the plot might take center stage over the characters. Yet, that is not the case. Taking into consideration how easily tone can be misconstrued through electronic forms of communication, Black does an excellent job of bringing her characters to life and giving them individuality and nuance. This is true, especially in the character of Mina who is the main protagonist of this novel. While still an example of goodness and devotion, Black’s Mina subscribes to a bit more girl power. She’s a strong, independent young woman who’s a Jujitsu champion and doesn’t allow herself to become anyone’s doormat. I really enjoyed her character and the direction that Black developed her.

If I had any complaints about this novel it is only that the last third seemed a bit rushed. There is a lot of build up and then the climax just rushes by. I feel like some of the emotional significance got a little lost in the dash to the end. But as I said before, I’m not sure how the original novel was paced since I haven’t read it yet, so it could be mirroring the original in pacing and I’m just not aware of it.

Overall, with a cleverly re-imagined plot, an updated cast of characters, and a gorgeously visual presentation that gives a nod to our 21st century obsession with electronic connection, iDrakula is a wonderfully dark and creative homage to Bram Stoker’s gothic classic. 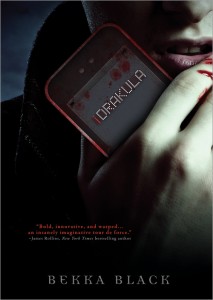