Katarina Bishop has worn a lot of labels in her short life life. Friend. Niece. Daughter. Thief. But for the last two months she’s simply been known as the girl who ran the crew that robbed the greatest museum in the world. That’s why Kat isn’t surprised when she’s asked to steal the infamous Cleopatra Emerald so it can be returned to its rightful owners.

There are only three problems. First, the gem hasn’t been seen in public in thirty years. Second, since the fall of the Egyptian empire and the suicide of Cleopatra, no one who holds the emerald keeps it for long, and in Kat’s world, history almost always repeats itself. But it’s the third problem that makes Kat’s crew the most nervous and that is simply… the emerald is cursed.

Kat might be in way over her head, but she’s not going down without a fight. After all she has her best friend—the gorgeous Hale—and the rest of her crew with her as they chase the Cleopatra around the globe, dodging curses, realizing that the same tricks and cons her family has used for centuries are useless this time.

Which means, this time, Katarina Bishop is making up her own rules. (Goodreads summary)

If you haven’t read Heist Society and you don’t like spoilers, you may want to wait to read this review. If you haven’t read my first review, read that first because this one will assume you have and probably will make little sense otherwise.

I loved this book just as much as the first! I read it in a day just like the first and enjoyed every second. Basically, it’s more of the same: another gorgeous cover, great character development, very tight plot, super witty banter. However, unlike episodes of Dora the Explorer , it has a completely different theme. In Heist Society Kat learns a “noble” way to steal…I won’t give away the theme of Uncommon Criminals but it will be obvious by the end. Heist Society ends with Kat returning the paintings stolen by the Nazis to Mr. Stein. Uncommon Criminals begins with Kat traipsing off around the world stealing back other things that have been stolen from the rightful owners and returning them (to the best of her ability)…alone. She refuses to take Hale or anyone else with her which really ticks off Hale…REALLY ticks him off. So, you’re left thinking, “Kat you idiot…would you just take the guy who’s obviously in love with you and you’re obviously in love with, with you!? Otherwise you’re going to lose him!” So Kat is basically a Robin Hood-ette who “only works alone.”

I’ve already told you Kat and Hale’s relationship is complicated in this novel…based mainly on the idea that she’s been taught her whole life not to hold anything too close and not to love anything too much because it might be taken away. She’s already lost her mom and she finds herself caring about Hale too much…so enter teenage drama. =) Ahh the sweet, drama of teenagerhood.

There is more Gabrielle and the gang and there is also more Nick. So anyone who loved and/or hated him from the first book will love and/or hate him again. =) The Heist is perfect again. Another fun read. I am very pleased that Carter delivered more of the same …an equally good book…without being redundant. I am really hoping there will be a Heist Society 3 since there are still unanswered questions and more that could be done. =)

What I love most about Carter’s books is their cleanness. No swearing, no super steamy makeouts, no sex. I am not a huge fan of excessive swearing and sex in novels geared towards…well anyone but especially young adults. Part of the reason that I read YA lit (still…despite the fact that I am nearly 30) is because I don’t like to read sex (it’s just so awkward normally) and the f-word again and again which is what you find in a lot of “adult” lit so I appreciate Carter’s writing so much. I am not saying I don’t like to read a good kissing scene from time to time but I much prefer the squeaky clean tension that is created from wanting two characters to just KISS ALREADY!!! than to have said characters making out ever other scene. Thank you, Ally Carter! =) 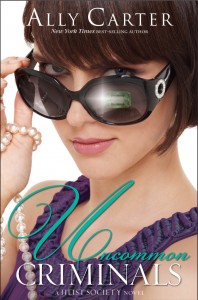