“One day, you and I are gonna’ wake up and be alright. Maybe not today, maybe not tomorrow but one day. One day. I promise you.”

Kicked out of their foster homes because they suffer the ‘eighteen disease’ with nothing but a hundred dollar check from the government and a pat on the back, they’re forced to rely on a system that failed them miserably.

So they sit. They sit inside Social Services, waiting for their social workers to call their names and offer them the miracle they know will never come but they sit anyway because they have nowhere else to go, no other options on their very literal and figurative empty plates.

But as they sit, they notice the other. Although captivated, they each come to the conclusion that life is complicated enough without throwing in a boiling tension that can’t ever be acted upon because they’re both too busy thinking about where their next meal will come from but when their names are called and both are placed on a year long waiting list for permanent housing, suddenly relying on each other seems like a very viable plan B.

Well, except for the psycho from Harper’s past that haunts her and, oh, yeah, there’s the little issue that neither of them knows they’re in love with the other.

Now eighteen and no longer a viable meal ticket for her current foster family, Harper Bailey finds herself suddenly homeless and uncertain of what her future holds. Callum Tate, also a product of the system, is no stranger to fending for himself on the harsh streets of New York City. When he and Harper meet by chance at their social workers’ office after they both being told they have nowhere to go, Callum determines to look after this girl who tugs on his heartstrings, kick-starting a friendship and a love that gives them both courage and a home.  But will they have the courage to admit how ridiculously head-over-heels in love they are with each other?

Whew. This novel is intense. Callum & Harper’s story completely sucked me right in and held me captive until their story came to an end. These two characters are just so likeable and believable that I couldn’t help falling in love with them through their struggles and through their victories. Both Callum & Harper matriculated from the school of hard knocks, both afraid to invest emotionally in others, both afraid their feelings won’t be reciprocated in kind. Yet they recognize in each other a kindred soul – someone who can empathize with and understand the emotional trauma and loss of youthful innocence that mark their own experiences. The connection they begin to form, starts a little bit quickly for my personal preference, but I can appreciate their attachment in light of their respective backgrounds. And while I don’t necessarily believe in love at first sight, I think that people can form connections to each other rather quickly – that one soul can recognize a like soul. And both Callum & Harper are wonderful souls.

The romance that begins to develop between Callum & Harper is the real draw of this novel. While the time line for how their relationship progresses is the teensiest bit on the unbelievable side, it is one that builds at a lovely simmer and just begs you to keep turning the page. Fisher does a wonderful job with the pacing and creating a consistently building intensity, both romantic and otherwise, throughout this novel right to its explosive ending.

Harper Bailey. She’s endearing, and it’s easy to see why Callum is drawn to her. She’s mouthy, tough and a little rebellious, but at the same time those rougher qualities are balanced by a wonderful vulnerability and a compassion for others. Being given up by a mother who was too strung out to care for her and having been passed around to foster home after foster home, Harper’s careful not to let people in emotionally. Getting too attached to someone only means heartache when they eventually leave you. She’s a girl who’s lived a tough life before her chance encounter with Callum, and while it doesn’t necessarily get any easier after meeting him, she now has someone with whom to weather life’s storms. Callum is different. He understands.

While Callum’s experiences differ somewhat, his life has also been no picnic. However, from an early age Callum determines to make something of himself, to define his own worth. So he buries himself in the pursuit of academic excellence, hoping that his efforts will result in college acceptance and a scholarship. Callum’s charm is in his confidence, in his never-ending resourcefulness, in his loyalty and his overall “it’s-going-to-be-ok” attitude. His protectiveness of Harper is incredibly endearing and I love his maturity. But more than anything I love that Callum refuses to be a victim of his circumstance.

As a sidenote, shamefully, I’ve never given much thought to what happens to those kids who make it through the system unclaimed – those kids who survive to adulthood parentless and friendless. I mean I’ve been surrounded by those who’ve been adopted throughout my life, members of my family and friends with huge hearts, who’ve adopted or cared for foster children. So it’s not like I’m removed from the issue. I’ve just never been exposed to the reality of these adults, who are little more than kids, who suddenly find themselves all alone in the world. So thank you Fisher, for making me more aware.

Overall, with heart-wrenching twists and turns and spine-tingling romance, Fisher Amelie has created a heartwarming story of love, perseverance, hope and the people we make family. 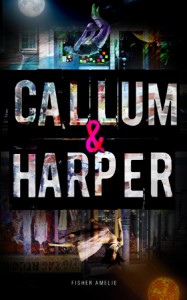