Finley Jayne knows she’s not ‘normal’. Normal girls don’t lose time, or have something inside them that makes them capable of remarkably violent things. Her behavior has already cost her one job, so when she’s offered the lofty position of companion to Phoebe, a debutante recently engaged to Lord Vincent, she accepts, despite having no experience. Lord Vincent is a man of science with his automatons and inventions, but Finley is suspicious of his motives where Phoebe is concerned. She will do anything to protect her new friend, but what she discovers is even more monstrous than anything she could have imagined…(Goodreads summary)

I think I actually enjoyed this short story more than I liked The Girl in the Steel Corset.  This is mostly because of Finley Jayne. Finley’s character and her struggles with her darker side, her questions about what she is, her reluctant acknowledgment that she’s different than most people, and her unconscious decision to use whatever is inside of her, be it good or monstrous, to help others. The times she gives in to the darkness and lets it control her are probably the most interesting parts of the story. The dichotomy isn’t quite as pronounced as in The Girl in the Steel Corset, she doesn’t lose herself quite as much in darkness, possibly because the darkness hasn’t gotten a firm grip on her yet – it’s still growing. Yet it’s still fascinating.

Though I am a huge fan of romance, it was refreshing to see Finley interacting with characters outside of a romantic entanglement. I feel like I got to know her more fully under the circumstances of this novella than I did in the full-length sequel – the focus is on her instead of the love triangle she becomes embroiled in later on. I love her relationship with Lady Morton and Phoebe, and I sincerely hope that they’ll both make another appearance at some point in this series. I also love how Griffin was both in this novella while not being in this novella. You’ll have to read it to see what I mean.

Overall, an enjoyable prequel that provides more insight into Finley’s character and that ultimately made her more relateable. 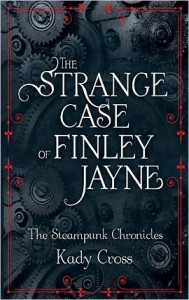 Published: May 1st 2011 by Harlequin Teen