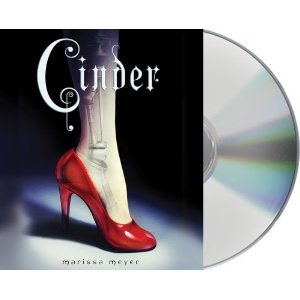 Thank you to Macmillan Audio for providing a clip of the Cinder audiobook!  So enjoy the sneak peak ya’ll!

Rising from the ashes of the globally devastating World War IV, mankind has rebuilt and reestablished cities, countries, and civilization.  Now over a century later, the Eastern Commonwealth finds itself ravaged from within by a plague that seems to have no cure and threatened from without by the promise of war with their Lunar neighbors.  The Lunars, the inhabitants of the moon, and the people of Earth have long been at odds with each other, as the Lunars are known to be users of “magic,” ruthlessly ambitious and notoriously cold-hearted.  But when the Lunar sovereign, Queen Levana, proposes a peace treaty that would ease tensions between Luna and Earth, Prince Kaito must consider whether or not it is in the best interest of his people to make such an agreement.   It is into this complex, highly political and troubled world that Meyer places her little cinder girl.

In her heroine, Lihn Cinder, Meyer has achieved a fantastic balance between toughness and vulnerability that I really connected with.  With no memory of her past before the age of 11, Cinder is placed under the guardianship of Lihn Garan, and taken to live with he, his wife and their two young daughters.  But when Garan dies shortly after assuming custody of Cinder, Cinder is reduced to the status of servant, as Adri, Garan’s wife, never wanted her in the first place.  Now sixteen, Cinder works as a mechanic at the New Beijing weekly market repairing damaged netscreens and household androids so that her stepmother and step-sisters can maintain the lifestyle to which they’ve become accustomed.  An orphan and a cyborg, her position within society is a tenuous one.  Feisty and intelligent, Cinder is still mostly human, and she knows her value even if it’s not widely recognized by others.  She stands up for herself, despite what she is, letting who she is shine through.  Which is ultimately what the Cinderella story has always been about for me.  Under the dirt and the ash, though she’s poor and despite the fact that she’s a effectively a second-class citizen —  while these things have an  effect and consequence, and hold some measure of importance – these things do not make up who Cinder is.  And Cinder is a great reminder that a person’s true worth comes from the strength and integrity of their character.

Kind, intuitive, discerning, quick-witted, and a good judge of character with a genuine love for his people, Prince Kaito is everything a good future emperor should be. He manages to be authoritative and regal without being arrogant. His friendliness won me over and and it’s easy to understand why even Cinder – careful, guarded Cinder – would be drawn to his charismatic personality. Though there wasn’t quite as much romance as I usually prefer, the development of the friendship/romance between Kai and Cinder makes sense in the context of the story – the duty Kai has to his people and the reality of what Cinder is.  It’s a tad more complicated than a simple rags-to-riches story.

In terms of the supporting cast of Cinder, Meyer did an excellent job of rounding out all of her characters, and in particular, I found Iko, Dr. Erland, and the Lunars to be really interesting. Iko is Cinder’s household droid, and the closest thing Cinder has to a best friend. To be honest, when Iko first appeared and I realized what her role would be in this story, I may have thought “Oh no…” and may have even rolled my eyes a little. However, Iko really grew on me. She became this incredibly endearing little sidekick who had hopes and dreams all her own, and I really came to enjoy her character. Second, Dr. Erland, the lead scientist working on the plague cure, I found to be one of the most interesting characters in the book. He’s one of those characters who raise interesting ethical and moral questions, a character who holds a lot of depth, and I would love to know more about him. Lastly, the Lunars in general held a certain fascination for me, because of the way they are described – devious, murderous, ambitious – not to mention they live on the moon. But in particular, Queen Levana and her thaumaturge, Sybil Mira. These two women are very intimidating characters. Powerful, strategic and cunning, they are definitely forces to be reckoned with, and characters that at once made me wary and excited. Excited? Yes. I really do love an intelligent and formidable villain.

One of the over-arcing themes I found extremely interesting is the question of human rights that plagues the Eastern Commonwealth. At what point does a person become less than human when altered by the technological advancements of modern medicine? In that same vein, in Cinder’s world androids are commonplace. But by creating androids who learn, evolve and begin to interpret the world around them independently, mankind has in effect created a new form of sentient being. Should these beings have rights? And what about those caught in between? Those who are part-human, part-android – the cyborgs? By becoming part machine, have they lost some essential, irretrievable piece of their humanity? By prolonging their lives through science, cyborgs have gained a second chance at life, when by all rights they should be dead. But at what cost, when they are regarded by human society as a whole to be “less than?” Both cyborg and android rights are severely limited, legally they can be viewed as property, and their fate controlled by those who have guardianship over them. The moral implications of medical interference and the resulting social consequences are just extremely interesting and I found Meyer’s modern, futuristic interpretation of the European social hierarchy to be extremely creative, very thought-provoking and relevant.

Overall, with fascinating thematic elements, clever storytelling and a fantastic, updated heroine, Cinder is a fresh, enchanting and futuristic reimagining of a beloved fairytale classic. 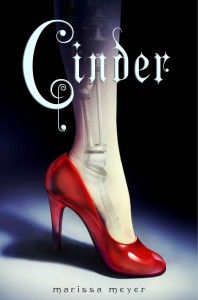