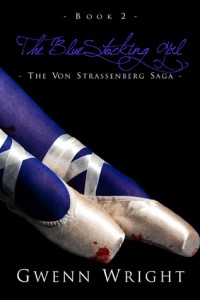 The saga continues as William Drexler III stumbles upon a secret that unleashes his darkest memories and Viktor von Strassenberg fights to keep his own secrets hidden from those who need the truth most.

Ever since I finished Filter, the first book in The von Strassenberg Saga, I’ve been DYING for the second.  Gwenn is fantastic at weaving and pacing complex, intriguing mysteries, and she has such a gorgeous and lovely writing style.  So… she asked me to beta read about 150 pages of The BlueStocking Girl for her last week, and let me tell ya’ll… the sequel is TOTALLY worth the wait.  And if you’re wondering why I’m still waiting on it, well… she only gave me the middle.  Yup.  I didn’t get to read the very beginning AND I’m most certainly didn’t get to read the end… and I’m on pins and needles to find out what happens!

For those of you wondering, “Just what is the von Strassenberg Saga?”  Well.  Let me tell you.  It’s a dark mystery that encompasses three families, the von Strassenbergs, the Demures and the Drexlers; secrets, betrayal, romance and tragedy abound.  Gwenn artfully navigates multiple narrators as they tell their stories over several generations and as their experiences begin to form a cohesive picture of the secrets that surround these three families.  It’s fascinating.  It sucks you in.  And while not a paranormal book, it does have elements of the gothic and strange.

And Gwenn said it would be alright to share a bit of a sneak peek of The BlueStocking Girl with you all, so here’s a bit of a teaser:

If you’re interested in reading Filter, the first book in The von Strassenberg Saga, check out my giveaway for the Kindle/Nook ebook HERE!