Just weeks before graduating from high school, Grace is running for her life with her magical and mysterious boyfriend, Sebastian, by her side. An ancient magic has been awakened inside of Grace that is powerful, frightening and barely within her control. The Others, who possess their own dangerous magic, are hunting them, and their only hope is for Grace to learn how to harness her incredible powers to stop them. The answers they seek are hidden within a life lived thousands of years ago, shrouded in mystery, magic and deceit. When their past catches up to them, Grace and Sebastian are faced with a truth that shakes the foundation of their relationship, their lives and everything they thought they knew. It is up to Grace to learn to control the Lost Magic, to right the wrongs that have been done, and to discover once and for all, who she really is.

** If you have not read the first book in The Lost Magic Series, Amber Frost, the review below may contain spoilers. **

What if you had the power to make your deepest desires or tiniest whim come true? Would anything truly be real? Would relationships be genuine? Or would you constantly be wondering that if they had a conscious choice, would people help you, befriend you… love you? Desires can be dangerous things – fleeting, ever-changing and oftentimes not in a person’s best interest. Desires can have far-reaching consequences. Desires can be deadly.

Eighteen-year-old Gracelynn Stevenson is just weeks away from her high school graduation when she discovers the truth about herself, power she possesses… and the danger she now faces because of it. Together with Sebastian, her boyfriend and eternal soulmate, Gracelynn finds herself hunted by the Others, a group of immortal beings created by her beloved Sebastian so many centuries ago. Like Grace, they have also just discovered who she truly is, and fearful of the power Gracelynn and Sebastian would be able to wield together, the Others have sworn to destroy them both. Now fleeing for their very lives, Grace and Sebastian must find a way to stop their enemies. But their search for truth leads them down paths they never could have predicted, dredging up long buried lies, secrets and questions that threaten the very foundation of their relationship.

The journey Gracelynn’s character undergoes in Silver Dew is perhaps one of my favorite aspects of this novel. While she wasn’t a weak character in Amber Frost – not by a long shot – she was mostly in the dark for most of the novel, not sure what was really going on with Sebastian. The balance of power in that novel mostly resided with him as he held the answers and she relied on his knowledge of their unique situation. However in Silver Dew, Gracelynn begins to come into her own, becoming a powerful and strong character in her own right. Her progression throughout the novel is exciting to watch and so organic. As Gracelynn and Sebastian attempt to stay one step ahead of the Others, Sebastians tries to help Gracelynn recall her abilities — to help her focus and harness her magic. But frustratingly, it continues to allude her. However, the attempts to tap into her dormant power causes Gracelynn to remember certain things from her time as Caoilinn. As she witnesses Caoilinn’s thoughts, actions and motivations firsthand, she begins to wonder what kind of person she was… and who she really is. Her struggles with her identity are perhaps some of my favorite parts of the book. Is she Caoilinn? Is she Gracelynn? Is Caoilinn a part of her? Are Caoilinn’s mistakes her own? And also worrisome, can Sebastian differentiate between the two of them?

Sebastian… I love the way Davis presents Sebastian. She writes him in such a way that he feels like an old soul without making him stuffy, stodgy or annoyingly wise. He’s a person who’s lived and seen so much. He has lifetimes of experience and history to draw upon, yet circumstances being what they are, he believably comes across as a modern 21st century teenager while still an immortal being. The development of his character in this novel is also fantastic. As Gracelynn discovers more about herself and Caoilinn, Sebastian’s memories also are returning to him, weakening him and causing him to lose his grip on reality. I love his character, and so the difficulties that plague him throughout Silver Dew broke my heart, but that’s just a testament to what a great storyteller Davis is.

As intimated earlier in this review, the quest to stop the Others leads Gracelynn and Sebastian to shocking revelations of both their past lives, throwing their relationship into jeopardy and casting doubt on the genuineness of their connection. The problems they experience are more than the product of some over-emotional, teenage-angsty drama, but rather some real and weighty issues regarding trust and betrayal.  As a result, Silver Dew takes both Gracelynn and Sebastian to the brink of emotional and mental devastation.

And it is brilliant.

As a reader, I’m more than willing to have my heart broken in the course of a story, if the author makes those choices to create something amazing. As with her first book, Amber Frost, Davis once again does an excellent job of connecting emotionally with her readers. She made me truly care about her characters and had me emotionally invested in their relationships. I love books where the author is willing to take their characters to extremes, making me wonder “How could this possibly get any worse, and more than that, how can they possibly resolve this happily?” For an author to rip my heart out, tear it into a million pieces, and have me still wanting more?  That’s a good book… and a good author.  Silver Dew is one of those books for me. I literally could not put this novel down, because I had to know what was going to happen to Gracelynn and Sebastian.

Overall, Silver Dew is gripping, it’s fast-paced, it’s incredibly romantic, it twisted my heart all-around-and-upside-down, and when all was said and done, left me saying, “WOW!” 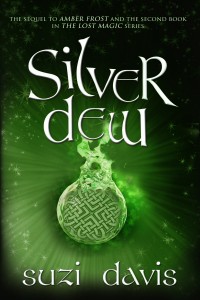