Nara Collins is an average sixteen-year-old, with one exception: every night she dreams the events of the following day. Due to an incident in her past, Nara avoids using her special gift to change fate…until she dreams a future she can’t ignore.

After Nara prevents a bombing at Blue Ridge High, her ability to see the future starts to fade, while people at school are suddenly being injured at an unusually high rate.

Grappling with her diminishing powers and the need to prevent another disaster, Nara meets Ethan Harris, a mysterious loner who seems to understand her better than anyone. Ethan and Nara forge an irresistible connection, but as their relationship heats up, so do her questions about his dark past. (Goodreads summary)

If you had the opportunity to change fate would you? Would you change the future, knowing that you’d be saving someone from heartache, pain, even death? Would you do it even if your well-intentioned actions had repercussions you couldn’t have foreseen? These are the questions Inara must ask herself every day – that she’s asked herself every day for the last nine years. When she was seven, Nara began having the dreams, realizing she was gifted, or cursed, with the ability to see her entire day before it even happened. Now she lives her life in a constant state of deja vu, both comforted and unsettled by the fact that she knows what is going to happen before it happens. For years Nara has, for the most part, let life run it’s course as intended due to a tragic event that occurred because of her well-meaning interference. But when she dreams of an attack on her high school that results in injury and fatality, she knows she can no longer stand idly by and does her best to change her vision. As a result, Nara becomes embroiled in a deadly and dangerous mystery that she desperately tries to unravel with the help of Ethan, the loner new guy at school.

I loved Inara. She’s so likable, and – despite her obvious abnormalities – just so normal and easy to identify with. Because of her dad’s abandonment when she was just five, her mom’s workaholic-way of coping with his desertion, and the ever-present need to keep her precognitive dreams a secret, Inara is an extremely mature and discreet sixteen-year-old. She’s even-tempered, big-hearted, and a good friend. She’s not accustomed to the dangers she begins to encounter, but she proves to be very tough – especially mentally – and very protective of her friends and family and willing to do the right thing even if there are consequences. Inara doesn’t completely understand her gift, why she is the way she is, and she’s both comforted and extremely bored by the fact that nothing in life surprises her anymore.

Until she changes the future.

Until she meets Ethan, the intriguing loner she never saw coming.

Now her life is a constant source of surprise as she begins to lose her dreams, and therefore her knowledge of what will be.  A prospect she simultaneously finds thrilling and frightening.

Mysterious. Aloof. Anti-social. Nara doesn’t know much about the guy whose locker is right next door to hers other than the stories the Blue Ridge High rumor mill is churning out. Reportedly kicked out of his last school for violently beating another boy unconscious, Ethan Harris presents conundrum for Nara. Who is he really? Is he dangerous? Can she trust him? And most troubling, he seems to know things about her. Things she’s purposefully kept hidden. And yet she’s strangely drawn to him.

And she wasn’t the only one. P.T. Michelle, thank you for giving me another favorite book boy. Ethan is a survivor. Because of his past, he’s endured a lot of horror and tragedy and these experiences have given him a unique perspective and a confident maturity. Courageous and kind, he often finds himself defending those who cannot defend themselves. While the reader is given a chance to get to know Ethan, Michelle did a fantastic job of surrounding Ethan in a perpetual air of mystery. The questions encompassing his character and his moving back story provided him a lot of depth.

The relationship that begins to develop between Nara and Ethan, well… let’s just say I love it. I thought the progression of their friendship to a romance was so sweet and lovely. I particularly loved the balance in their relationship. It’s somewhat typical in young adult paranormal romances for there to be a lopsided balance of power in romantic relationships. One person usually has some kind of special ability or a fundamental difference that gives them an edge over the other, in some way leaving one of them at a distinct disadvantage. While that type of romance can have an appeal, I found Nara and Ethan to be extremely refreshing, because Nara’s not the only one keeping secrets.  But they also seem balanced in more basic, “human” terms. While Ethan is protective of Nara, he’s not overprotective. He respects Nara’s independence and her ability to make her own choices. He respects her decisions even if he doesn’t understand or completely agree with them. There’s no jealously, no pettiness, no games. They are two people who have an identity outside of each other, bonded by a shared sense of loneliness and the secrets they are protecting. It’s a refreshing and passionate relationship between two people brought together by fate… or were they?

I don’t want to give anything away about the plot, but I will say that I found it very original and that it raised some interesting questions regarding fate and free will – questions that I’m hoping will be explored more extensively in the second book. Once I finished the book, I found myself extremely satisfied, while realizing that Michelle had left some pretty big questions and plot threads hanging until her next book. I love the fact that she played it so close to the vest, and didn’t show her whole hand in this first book, while still revealing enough to keep me incredibly intrigued and oddly satisfied… while, of course, still desperately needing to know more.

Overall, from the tight character development, to the intriguing, well-done plot, to the compelling paranormal mystery, to the pulse-pounding romance, to the villain I never saw coming… Brightest Kind of Darkness encompasses everything I love in a good story and has earned a place on my favorites shelf. 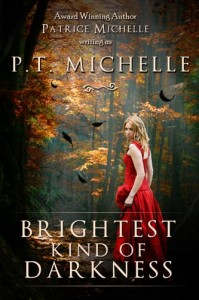