When one human stands before an army of impossible obstacles, the likelihood of overcoming them in this coming-of-age modern fairytale may result in war between light and darkness.

Abandoned as an infant in Prague, naive and strong-willed Charlotte Ruzikova was raised by one of the last Vampires left alive. As a human, she knows no other home than the one nestled deep in the woods of Eastern Europe, where Witches drew spells of enchantment, Phasers threw tea parties, and Elves are the closest in kin. Charlotte has lived her life in the dark with her Guardian, content to having him to herself and reveling in his attention, until she’s realizes she wants more…

Resident medical doctor and Vampire, Valek Ruzik fears the day his ward would come of age and blossom into a fine woman, and he is forced to confront his own motives as time is of the essence once his past catches up to him, and their lives become endangered…

As genocide and war threatens their secret society, the dictator in power is ready to wipe out Valek’s race, but Charlotte will not allow that to happen. Fighting for the only one she’s ever loved and truly believed in, she will do whatever it takes to save their love…before the sun comes up and light takes over.

When vampire Valek Ruzik comes across an abandoned human baby in the streets of Prague, he decides to fight his baser instincts and raise her as his ward. Now 19 years later, that baby girl — Charlotte — has grown into a lovely young woman. A young woman who has begun to develop confusing, romantic feelings for him.

Unfortunately for Valek, on top of difficulty navigating new emotional territory with Charlotte, it’s not a good time to be a vampire. Reviled by the governing body of magical creatures the rights of vampires have been more and more restricted, until it becomes clear that government means to do away with the race for good. Soon Valek & Charlotte are on the run from those would do them harm.

This book held particular interest for me, because the harsher realities of vampirism are not hidden or glamorized, and the vampires do not apologize for who they are — much. It’s interesting to me that these characters, Valek & Charlotte, are what you’d normally consider the “good guys” but only if you ,the reader, are accepting of a little moral relativism. They definitely don’t follow a moral code that the majority of western civilization would consider acceptable, particularly regarding the sanctity of human life. And like I said, this made the book interesting, though I wished it had more expanded on the topic more. There were no long explanations of these characters’ actions or philosophies to any satisfying extent. It was simply was.

The main issue I had with this book, is the character development. I don’t feel like I got a very in depth view of any of the characters, they all felt very “surfacey” and underdeveloped — like they’re holding the reader at arms length. I never felt a strong connection to any of them. Some of their reactions to circumstances or to other characters are kind of strange. And a few of the characters felt very dangerous at times but then they would do a complete 180 and were suddenly kind and understanding. I just couldn’t understand the unexplainable, somewhat manic changes of heart some of the characters underwent, especially at the end.

In regard to the story, the book description led me to believe that the book focuses on a coming struggle between vampires and The Regime, the magical governing body. In truth, while there is some warring between the forces of light and darkness, that plot line largely takes a backseat to the more central story of Valek & Charlotte, and mostly serves as a tool to further their story and relationship development. So if you’re expecting epic battles between magical creatures, you won’t find it here.

Overall, Of Light and Darkness is an entertaining and somewhat thought-provoking read that delves into the fascinating realm of the morally gray. 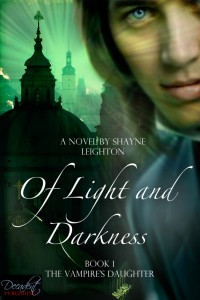 Title: Of Light and Darkness

Series: Of Light and Darkness (Book #1)