Seventeen-year-old Amy joins her parents as frozen cargo aboard the vast spaceship Godspeed and expects to awaken on a new planet, three hundred years in the future. Never could she have known that her frozen slumber would come to an end fifty years too soon and that she would be thrust into the brave new world of a spaceship that lives by its own rules.

Amy quickly realizes that her awakening was no mere computer malfunction. Someone – one of the few thousand inhabitants of the spaceship – tried to kill her. And if Amy doesn’t do something soon, her parents will be next.

Now, Amy must race to unlock Godspeed’s hidden secrets. But out of her list of murder suspects, there’s only one who matters: Elder, the future leader of the ship and the love she could never have seen coming. (Goodreads synopsis)

I’d like to start off by saying that I am totally not a sci-fi type. I typically like either contemporary or paranormal or dystopic literature; however, I LOVED Across the Universe! Beth Revis has done a masterful job of creating a beautiful world with relatable, well developed characters. I felt very at home yet at the same time very unsettled by the world of this novel. Telling a story in first person narrative from both main characters POV is risky, yet Revis does it beautifully. Amy and Elder’s perspectives add clarity to the story and have such unique voices that it does not slow down the story at all.

Amy is a fiery young woman who is both sensitive and loving and tenacious and brave all at the same time. She makes the best of most situations which is difficult considering her circumstances. Elder, I adore him. He tries so hard and wants so badly to be a good leader. He has so much responsibility placed on him and yet, he is still just a kid in many ways. Another big A+ for Revis is her development of secondary characters. I am one who will absolutely put a book down if the only characters I like in a book are the main ones. I have to feel like the secondary characters are real as well. Revis accomplishes this so beautifully! I love the characters from the Ward and especially Stella.

The plot development also kept me reading…when honestly there were other things I should have been doing. hehe. I figured out one of the big twists pretty early on; however, this didn’t deter me from reading further, and I’m glad because I would have missed the awesome ending!

Philosophy and ethics of leadership is a huge part of this book as well. I loved that Revis forces you to take a look at government and right/wrong on a deeper level. Things like Nature vs. Nurture, absolute truth, ends justifying means, and many more deep questions are visited and fleshed out in a very relevant way that doesn’t sound like propaganda. In a world where these things don’t often mean much anymore, it was refreshing to see them dealt with in a productive and honestly fun way! So looking forward to A Million Suns! 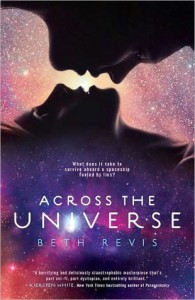 Title: Across the Universe

Series: Across the Universe (Book #1)