16 year old Grace has lived in the Smokies all her life, patrolling with her forest ranger father who taught her about wildlife, tracking, and wilderness survival.

When her dad goes missing on a routine patrol, Grace refuses to believe he’s dead and fights the town authorities, tribal officials, and nature to find him.

One day, while out tracking clues, Grace is rescued from danger by Mo, a hot guy with an intoxicating accent and a secret. As her feelings between him and her ex-boyfriend get muddled, Grace travels deep into the wilderness to escape and find her father.

Along the way, Grace learns terrible secrets that sever relationships and lives. Soon she’s enmeshed in a web of conspiracy, deception, and murder. And it’s going to take a lot more than a compass and a motorcycle (named Lucifer) for this kick-butting heroine to save everything she loves. (Goodreads summary)

After three months of fruitless searching and numerous dead-end leads, Grace Wells is the only person who believes her dad, Joe, may still be alive. Grace, an accomplished wilderness survivalist, learned everything she knows about tracking, fishing, and the Smokies from her forest ranger father.  And she is certain, beyond the shadow of a doubt, that he’s still out there somewhere – convinced that he wouldn’t fall victim to the fatal scenarios the police postulating. When the authorities decide the case doesn’t have enough viable evidence to continue an ongoing investigation, Grace redoubles her efforts to get down to the bottom of the mystery surrounding her dad’s sudden and unexplainable disappearance. What she uncovers is shocking – a complicated web of lies, betrayal and danger – and she’s in over her head.

Staying with the wilderness theme, Grace as a character is a breath of fresh air. More inclined to be nursing a sick bear, hiking mountain trails or perfecting her fly-fishing lures, she’s not exactly what I would call a “people person.” She’s a bit isolated from the rest of her peers, by circumstance and her own choice — her only real friend being her childhood-pal-turned-recently-dumped-boyfriend. She’s a unique character and I found myself really admiring her tenacity. Her unfailing determination to find her dad and her unshakeable belief that he’s still alive perhaps borders on the obsessive and at times I wondered if maybe she was just in deeply entrenched in denial — if her unrelenting search for her dad was just enabling her unwillingness to acknowledge that he might be gone. But whatever the reasons, her love for her father runs so strong and and her faith so contagious that I found myself hoping along with her that she’d find him safe and sound. When everyone else – even her mother – has lost hope, she refuses to give up on him. Her stubbornness, her determination, her resourcefulness, her instincts, her deductive skills and her in-your-face attitude all combine to create this extremely empowered heroine. I found her to be unique and despite her rough exterior, extremely sympathetic.

If being stuck in the middle of a dangerous mystery wasn’t enough, Grace finds herself further confused by the reappearance of her ex-boyfriend Wyn, and by Mo, a mysterious European backpacker who she meets in the woods. I personally don’t mind a well done love triangle, and this one was no exception. Johannes had me falling for both guys until I was just as confused as Grace. Wyn was sweet, funny, dependable and had the benefit of a shared history with Grace. He’d been there for her his whole life, until she pushed him away in the aftermath of her dad’s disappearance. Now he’s back in her life and doesn’t intend to go away any time soon. Mo, on the other hand, is brave, confident, kind, rugged, a survivalist like Grace and has that oh-so-attractive air of mystery about him. After being saved by Mo from a potentially life-threatening situation, Grace decides to get to know him better. Johannes has done such a good job bringing her characters to life and the romantic tension she creates in Untraceable between these three is fantastic.

The story Johannes has written surrounding Joe Well’s disappearance is incredibly fast-paced and well-researched. There was hardly any downtime as Grace is always on the go – plotting, planning and investigating. And all the little details surrounding wilderness survival, tracking and even fishing added so much to the story, not to mention credibility. As far as the mystery itself, though sometimes I felt the evidence that moves the case along is a little circumstantial and perhaps a little flimsy… it works. At times it seems as if Grace is grasping at straws trying to find the evidence necessary for the authorities to reopen the investigation. But really, who wouldn’t look into every possible lead if someone they loved was in danger or missing? It also serves to round out her character and made me wonder if she really is as unhealthily obsessed as everyone seems to think she is or if she’s just unfailingly optimistic. So, though I usually prefer my mysteries a little more concrete, when considering the bigger picture it ended up working for me.

If the story throughout is, as previously mentioned, very fast-paced, then Johannes puts it into overdrive in the last quarter of the book. Chilling, shocking and horrifying are the three words that come to mind when Grace finally gets to the bottom of what’s going on with her dad’s disappearance. Some mystery novels are amazing with the build-up of clues and suspense, only to falter anti-climatically in the revelation. Untraceable has no such problem. Her build-up throughout the story is worthy of the reveal at the end. It is gritty, it is hard, it is thrilling and when surveying the cost of what Grace’s search for truth cost her in the end, it is heartbreaking (and may require a fistful of tissues), but it is also oh-so-worth it. I’m trying to remain purposefully vague, Dear Reader, because if you’re anything like me, half the appeal of reading a mystery is being taken totally unaware and then thrilled by a sudden twist of the plot – your own personal mental roller coaster. So make sure you double check your safety harness before beginning Untraceable. (Ok…that might’ve been a little corny, but we’re moving on.)

The reason I didn’t give Untraceable a five star rating hinges upon a couple different things. First of all, I love Mo. I really do, but his extremely British dialogue began to grate after a bit. I realize it’s a fine line —  how to create a convincingly foreign character without making him sound too American — but I think a few less British-isms would’ve left the reader with a good compromise. Secondly, even though I love Mo and Grace together, their relationship felt a teensy bit too insta-love for me. He’s a somewhat secretive guy, and she knows very little about him. And I know that his strength and goodness of character, the important things one needs to know about someone else,  is apparent through his actions toward Grace. I also know that perhaps emotionally, she needed someone who doesn’t viewing her through the lens of her loss. So the unknown and anonymity may have been a draw for her when it comes to Mo. But their connection was still a little too instant for my taste. Silly as they might be, these points may not be an issue for you, Dear Reader, but they were factors in my own personal analysis of this book.  Despite my minor hang-ups, I really enjoyed this story and I highly recommend it to anyone who enjoys a good mystery/thriller.

Overall, with breathtaking suspense and wonderful romantic tension, Untraceable is a wilderness thriller that will keep you on the edge of your seat. 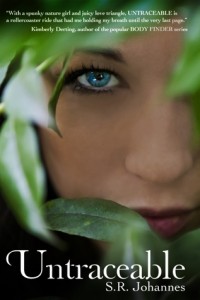 Series: The Nature of Grace (Book #1)