Does everything happen for a reason?

In the wake of enormous personal tragedy, sixteen year old Whitney Lane struggles to move on with her life. She finds herself juggling the responsibility of being a pseudo-mother to her six year old sister and trying to keep her mom’s rapidly declining mental health hidden from their small town’s rumormongers all while trying to navigate the turbulent waters of adolescence and boys. When she begins to hear strange noises and begins to see ghostly shapes flitting around the edges of her vision, Whitney questions her own sanity and wonders if she’s following her mother’s dark descent into depression, or if there’s something more to these unsettling occurrences. She starts to realize that there’s an unseen world beyond her tangible reality where the heavenly battle between good and evil rages, and that her own destiny is caught up in the middle of it.

I loved Whitney. She was deeply grieving the loss of her father, yet she saw that her family was in danger of falling apart and selflessly became the glue that held them all together. Responsible, protective, practical, mature, and optimistic despite her circumstances, Whitney was a character that I cared about and connected with instantly. Her relationship with her sister Ellie was probably one of my favorite aspects of the book. They were always so sweet with each other and each concerned about the other, and Whitney took great pains to shield her little sister from the harsh realities of their mother’s condition. My heart just broke for both these two girls who lost a little bit of their childhood innocence and were forced into a maturity beyond their years.

The story, the details of which I will not go into so that I don’t ruin anything for you, Dear Reader, was paced a little slowly; I found that it seemed to take a bit longer than necessary to reach the conclusion and the lulls in the action dissipated the sense of danger and urgency the characters faced. However, despite the slowness, the mystery and romance Cole weaves throughout the story still kept my attention and was well done.

Which brings me to the romance. Ah, the romance. One of the things that makes Courtney Cole such a delight to read is that she never takes the story in the direction I expect. In regards to Whitney’s love life, I was surprised, then surprised again and ultimately utterly thrilled with the outcome of the love story.

In a market where YA bookshelves are saturated with angel and demon stories, Cole’s twist on the genre was a refreshing change from the “I’m a super hot, but stalker-ish guardian angel and even though you have no idea that I exist, I’ve fallen deeply, madly in love with you” OR the “Hey baby, I’m a sexy, bad boy fallen angel who is all kinds of divine trouble. Like motorcycles? What’s your sign?” stories we’ve been exposed to the last couple years. I mean, come on. I adore Patch Cipriano as much as the next girl, but you KNOW what I’m talking about, right? More often than not, angel stories end up in one of those two categories. With Guardian, Cole has truly created something unique and heartwarming – a story that’s all her own. Incredibly poignant and a bit more philosophical than her previous books, Cole explores the nature of grief, questions the purpose behind human tragedy, and inquires as to whether there’s such a thing as predestination, all while building her story to an exciting, dramatic conclusion. 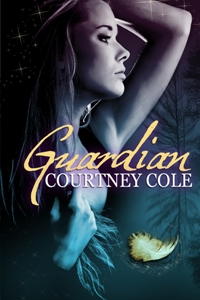