I just finished and reviewed M. Leighton’s fantastic young adult paranormal, The Reckoning, which is the sequel to The Reaping and the dramatic conclusion of The Fahllen series.  It’s super creepy and deliciously dark with an awesome heroine and a dreamy leading man (M.’s leading men are always incredibly dreamy…<sigh>) and I totally recommend it. Today on the blog, I’m welcoming the fabulous M. Leighton and the lovely heroine of The Fahllen series, Carson Porter!

So here you are, Dear Reader…

an up close and personal chat with Carson!

1.  So Carson, you inherited some pretty cool powers to use in the service of reaping souls, but between Fire and Earth which is your favorite to wield and why?

I like wielding fire better.  If you take away the fact that Derek taught me to use it, which I can’t seem to forget each and every time I conjure it, it’s still a really cool power to wield.  It’s very intimidating and it makes me feel more confident in my abilities than controlling earth does.  Don’t get me wrong.  Earth can be very useful, but it’s a challenge to maneuver sometimes.  I’d gladly take either one, but if I had to choose between them, I’d choose fire.  Every time.

2.  You’re graduating this year from high school (which is super exciting, by the way… congratulations!).  Is your goal to someday go to college?  And since there are no courses such as “Soul Management: Light, Dark & Undecided?” or “How To Defeat Evil, Soul-stealing Baddies 101,” what would your major be?

I would never really have considered skipping college, just because it meant so much to my dad.  I would’ve done it for him.  But now I have Derek to think about, too.  I want to be with him and I want for our future to have every chance humanly possible of being normal and productive.  Yes, I’ll go to college.  We’ll go together.  As for my major, I’d like to take psychology.  During my reaping, I’ve seen so much pain, so many hurting people that I feel like I would really like to learn to help people before they get to that point.  Plus, maybe I could find a way to outsmart Derek if I took psychology.  He seems always to be a step ahead of me.

3.  Girl talk.  Derek…omigosh.  What’s the very first thing you noticed about him?  Your most favorite thing about him?  Adorable idiosyncrasies? Dish.

Even though I dreamed about him and then saw him in the mall that one time, I always think of my first time REALLY seeing Derek as being the night he rescued me at the lake.  I’ll never forget looking up and seeing him standing at the edge of the woods, staring at me.  He was the most perfectly gorgeous guy I’d ever seen and, believe it or not, since then, he’s only become more so.  I guess it was his eyes that always sort of captured and held me, from that very first second.  It was like he was seeing through my skin, through ME and into my soul.  And now, when he looks at me, I can see in his eyes how much he loves me.  That’s my favorite thing.  That he shows me how he feels.  Without having to say a word, he gets his point across.  His eyes say so much.  And I still dream about them.  To this day, I still dream about them.

As far as little things he does, when he’s getting ready to tease me, he sort of bites his bottom lip for just a second first and it makes a little dimple come out at one corner of his mouth.  I love that dimple!!  I’ve kissed it dozens of times.  I’ve never told him that he does it.  I’m afraid if he knew he’d stop and I love it too much to risk him stopping.

4.  If you could mindlessly rot your brain on one television show, which one would it be and why?

The Vampire Diaries.  I can really relate to Elena sometimes, what with her life almost continually falling apart, with every part of her existence being challenged on a regular basis.  Plus, I like Damon.  He’s got that same rough edge that Derek has.  I love rough edges!

5.  If you didn’t have to worry about your divine calling and could travel anywhere in the world, where would you go?

Italy!  Derek loves Italian food and I love to look at amazing architecture.  When I was a lot younger, Dad used to try to sort of push me to become an architect.  He’d have loved Italy, too.

6.  What’s the happiest memory you have of your dad?

When I was about 8 or 9 years old, I was really feeling left out of the whole “being a girl” thing and I wanted to start wearing bows and clips in my hair like all the other girls.  Of course, Dad was staunchly opposed, but I was just too young to understand why.  Well, after a few weeks, a bunch of the other kids started making fun of my haircut, saying I looked like a boy.  That totally broke my heart!  I mean, you know how mean kids can be.  Anyway, I asked Dad again one night at supper if he’d let me get some hair things.  He told me no again and we got into a big fight about it, after which I ended up telling him I hated him and locking myself in my room.  The next day when I came home from school, there was a banana and a glass of milk waiting for me at the kitchen table, just like there usually was, but beside them was a pack of about 6 or 10 hairbows and ribbons.  Dad never said a word about it and neither did I.  And that was the only time he really gave in to me being a girl.  But I never forgot it.
7.  As unpleasant as it may be, what is the most rewarding part of your job as a reaper?
Helping people.  There is something so…cathartic about helping someone even when you feel like your own life is chaotic and out of control.  I suppose it gave me a sense of purpose and order in a world gone mad, too.  It’s just an all around good feeling to really help someone else, in a way that truly matters.  Even if it hadn’t been my job, my calling, it would’ve been worth it.  Totally worth it.

And to give you all an opportunity to read The Fahllen, I’m having a giveaway!!!

ONE (1) follower will win ONE (1) Kindle ebook of their choice from The Fahllen series by M. Leighton.  You can choose either The Reaping OR The Reckoning. 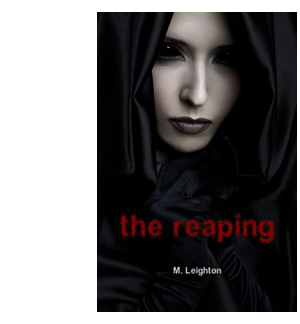 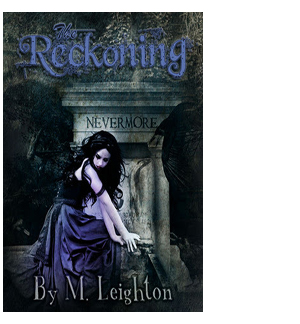 This prize requires the winner to already have a Kindle or have access to the free Kindle app for PC, MAC, iPad or smartphone. Click on the covers to view their Goodreads pages.