The year is 2195. The place is New Victoria—a high-tech nation modeled on the manners, mores, and fashions of an antique era. A teenager in high society, Nora Dearly is far more interested in military history and her country’s political unrest than in tea parties and debutante balls. But after her beloved parents die, Nora is left at the mercy of her domineering aunt, a social-climbing spendthrift who has squandered the family fortune and now plans to marry her niece off for money. For Nora, no fate could be more horrible—until she’s nearly kidnapped by an army of walking corpses.

When I first heard of Dearly, Departed, I was incredibly intrigued by the concept of a girl falling in love with a…zombie? I mean, I’ve gotten on board with the whole falling for the undead thing before (Twilight, anyone?), but typically, you don’t think of zombies — slow-moving, mindlessly-grunting, brain-eating, flesh-rotting zombies — as a potential love interest. Let’s face it. Zombies are all kinds of gross and decidedly NOT sexy. So I was really curious as to how Lia Habel was going to win me over to her particular brand of undead leading man. But she did it. She totally did it, and Dearly, Departed has found a place on my favorites shelf.  And zombies?  Well, zombies… perhaps they’re not so bad or so gross after all.

The world Habel has created is one of the most interesting I’ve come across in a while. The year is 2195 and the place, South America. A global ice age and a second American Civil War (that wasn’t so civil) caused a mass migration southward into the countries of South America. In this post-apocalyptic environment, the survivors began to rebuild their civilization, modeling it after what they considered to be the epitome of refinement, success and etiquette — the Victorian era. The Victorian era, but with nifty gadgets such as phones, computers, digitized tablets, and holographic emitters. While not fitting the traditional category of steampunk where technology is advanced yet runs on steam, Habel’s neo-Victorian world is definitely a fascinating blend of the past and present. All in all, the world-building that has been done for Dearly, Departed is complex, rich in history, and boasts incredible depth. It’s a world I happily lost myself in for several hours, and can’t wait to immerse myself in again.

While the citizens of New Victoria have successfully revived their society from the ashes of war and natural disaster, while their achievements are truly a wonder, they have unfortunately regressed in other areas. Particularly that of civil rights. In adopting Victorian styles and ideals, the people of New Victoria have also adopted the class system that was so prevalent in that era.  They shun those considered “beneath” them, and treat women as delicate creatures whose virtue and fragility of mind must be upheld and protected at all times. It’s interesting to see this shift in mindset, and to note that the women survivors – who undoubtedly fought just as hard as the men for the opportunity to live and rebuild – apparently decided to acquiesce to these archaic feminine ideals. However, not everyone agreed with the new civilization that was being constructed and those individuals, labeled Punks, left to live on their own and have been at odds with the New Victorian government ever since.

I went into Dearly, Departed with the preconception that this book was Nora’s story, and while largely it is, it is not hers alone. As with many other books I’ve read of late, Habel does not only tell the story from Nora’s perspective but employs multiple narrators – five in all. Each of the five narrators tell their story from a first person perspective, which makes for a an interesting and rounded-out view of events, characters and the world at large. While juggling five unique viewpoints could potentially be very confusing for a reader, Habel does a good job of clearly differentiating between narrators, and never once did I find myself confused. And who are these five narrators, you may ask? The three primary points of view comes form Nora Dearly, Capt. Abraham (Bram) Griswold, and Pamela Roe — Nora’s best friend. The two others appear less regularly and for the sake of the story, I’ll let you, Dear Reader, discover those on your own.

Nora Dearly, while raised to a life of privilege due to her father’s esteemed service to the government, is – internally if not externally – the antithesis of the ideal New Victorian woman. Of an age where securing a good marriage for better social status and future financial security should be her primary focus, Nora is instead more interested in news about the home front where the “royal” (aka – New Victorian) troops hold off the ever-invading Punk army.  She’s more interested in watching war holos recounting long-ago battles, and more interested in her marksmanship with a firearm than taking tea with the more-affluent-than-thou. Despite her diminutive size, Nora is spunky, clever, courageous, outspoken, has an incredible presence of mind, a quick temper and is not afraid to stand up for herself. In short, she’s a fantastic heroine.

Nora first meets Bram when he’s sent to rescue her from an evil, undead kidnapping attempt. A victim of the Laz, the disease that causes the zombie-fication of humans, Captain Abraham Griswold is indeed a card-carrying member of the walking, mostly functioning dead… and coincidentally my favorite character. A testament to the fact that a change in state does not have to mean a change in the qualities that truly make a person a person no matter how “alive”, Bram is a true leader, intelligent, loyal, honest, kind, extremely patient with amazing self-control. He’s a man who’s accepted his reality and his sense of humor about his current state-of-being demonstrates a peace about his situation which in turn demonstrates a wonderful maturity and perspective. For a guy who should be six-feet under, he’s one dreamy zombie and it’s not hard to understand why Nora would be drawn to him.

Pamela Roe, though I wasn’t to sure about her in the beginning, completely surprised me and quickly grew to be one of my favorite characters. Where Nora is all fire and spunk, Pamela is the more calming influence that balances out their friendship. When we’re first introduced, it appears as though Pamela is more concerned with etiquette and all those things a lady should be concerned with – fashion, tea, and marriage prospects. However, as events in the book unfold, she displays a quiet inner strength that I’m not sure she even knew she possessed. She’s practical, observant, kind, protective of her family and friends and willing to do the right thing even when it’s inconvenient, dangerous or potentially unladylike. She is perhaps the character that undergoes the most change in this novel, and I found myself eagerly looking forward to her turns at narration.

The plot itself was very tight and constantly moving with surprising twists and turns; the mystery well-woven. In addition to the three characters I’ve introduced in this review, Habel has given her story a large, wonderful and diverse cast of characters who populate the world of New Victoria and its outlying territories. Her character development is very well done, and even minor characters are marked by depth and uniqueness. The romance between Nora & Bram is built at a satisfying and believable pace. Their feelings have a real foundation, which I always appreciate. And the detail and descriptions throughout the novel are vivid, lovely and sometimes chillingly gruesome.  In addition to the excellent plot and character development, the thing that makes Dearly, Departed really work is that Habel successfully walks that fine line between not taking her story too seriously but also taking it just seriously enough and it just works.

Overall, despite my initial reservations, Lia Habel’s Dearly, Departed, is in my opinion one of the best young adult debuts of 2011 and has found a permanent spot on my all-time favorites shelf. A definite must-read. 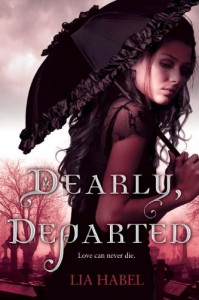 Series: Gone With the Respiration (Book #1)

Source: alternated between an ARC provided by Del Rey via NetGalley & a purchased copy