Ridley Heller thought her life would be perfect and trouble-free once she had Bo back. Unfortunately, she couldn’t have been more wrong. Learning Bo’s true identity has left them with their most difficult decision yet. They have two options. One, they can run away together and spend eternity looking over their shoulder, hiding from both God and Sebastian. Or, two, they can find a way to kill Sebastian. Ridley feels like there’s really only one choice, but killing Sebastian has a major down side for her—it will leave Bo mortal and her a vampire. She’ll be doomed to walk the earth alone for all eternity.

What will they choose? And who will have to die in order to see their goal accomplished? Find out in the exciting conclusion of the Blood Like Poison series, To Kill An Angel.

For those who have not read the first two books in the Blood Like Poison Trilogy, this review will definitely contain mild spoilers

The romance in this book…. whew! <Excuse while I fan myself off over here> The romance between Bo and Ridley has always been passionate, but Leighton has kicked up the temperature a few degrees in this final installment. Finally together after so much pain and hardship, Bo and Ridley aren’t wasting one second they have with one another, especially since their future – as told by the prophecy – is so uncertain. Though nothing about their relationship falls under the category of “normal,” this is as close as they come to having quality time that doesn’t end in a hurried, nighttime escape out of a bedroom window. One can almost imagine them having a future together if it weren’t for the rather dire prophecy they are supposedly destined to fulfill. And this question of what their fate holds, both individually and combined, is the driving force of this novel. Fans of this romance will definitely find satisfaction in all the up close and personal time Leighton gives Bo and Ridley.

Now a vampire, due to the explosive cliffhanger of Destined for a Vampire, much of this novel focuses on Ridley learning to control her urges and to hone her new abilities. While Ridley accepts her new state of being with relative grace, she does struggle a bit with some of the practical realities inherent in a vampiric lifestyle. It’s a development Leighton integrates gradually into her story, and I liked the fact that she took her time getting Ridley used to the concept of what being a vampire means.

In addition to the struggles of adjusting to her new lifestyle, Ridley also worries about the role she is to play in the prophecy. She wants nothing more than to help Bo defeat Sebastian and in doing so be rid of the evil that’s plaguing them and to rescue her niece, Lilly.  However, at the same time she’s terrified of what fulfilling the prophecy may mean for her and Bo’s future together. Loving, loyal, caring and brave Ridley’s metamorphosis into a vampire has not changed who she truly is, and she will need every one of her strengths to see their quest to kill Sebastian through to the end.

In addition to the characters we’ve come to know and love – the quirky Savannah, the honorable Devon, the flirtatious Lucius – Leighton introduces two new characters to her readers in To Kill An Angel. As Bo begins to regain his memories of his life before Ridley, he starts to remember people he once knew and places he once lived, though much of it is jumbled. Then a ghost from his past — an old flame — comes knocking on his door, literally, unlocking more memories and helping him make sense of the fragments he’s remembered. Because I love Bo and Ridley so much, I really had a difficult time with these two new characters. Annika and Cade’s main purpose for existing in this novel is primarily to create conflict between Bo and Ridley. One of the main reasons I’m so invested in Bo and Ridley is because they have a genuine connection, a love that’s based on more than the superficial, a love – though young – that has already withstood tragedy and trials. I can understand some fleeting moments of jealousy and I can understand how these feelings can potentially fuel a romance, but I found it to be a bit much.  The amount of petty jealousy both Bo and Ridley experience because of Annika and Cade only serves to downplay their strong relationship. While they never do anything really foolish because of their feelings, to me the whole thing just felt inconsistent with the relationship that’s been established thus far. I’m not saying I thought Annika and Cade to be unnecessary characters, I just wish they had been used differently to further the story.

Also, while I love all of the wonderfully romantic Bo and Ridley moments, I do wish they had been a little more proactive in their hunt for Sebastian. At times the larger storyline of fulfilling the prophecy got lost among the numerous and wonderful romantic interludes. I know that there was a lot going on in this novel, but a few more perilous face-to-face encounters with Sebastian and his lackeys would’ve given the final encounter a bit more of a gradual, slow-building tension. The final battle was exciting and heart-stopping for sure, but I felt like Bo, Ridley and their friends spent a large part of the book passively waiting for the prophecy to reveal itself.  I just would’ve preferred a few more dangerous escapades interspersed among all the romantic ones.

Despite these minor issues, I loved To Kill An Angel. Leighton is a master of romance and she’s wonderful at creating a strong emotional connection between her characters and her readers.  Story wise, I find her mythology behind Bo and Sebastian’s existence to be absolutely fascinating.  Her back story for both characters has such a lovely weight and depth to it and it had me wanting more of their history.

Overall, To Kill An Angel is an exciting and incredibly romantic conclusion to the fabulous Blood Like Poison Trilogy.

*Due to some mature content, I would recommend this book for upper YA/crossover readers. 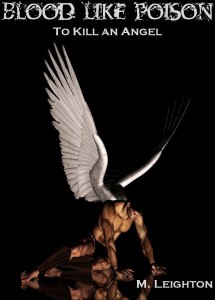