In a culture of cravats and corsets, a troubled sixteen-year-old stands out in her t-shirt and torn jeans. She takes the name “Memory” because hers are stolen, and she’ll do anything to get them back. Lost in a world not her own, where magic and monstrous fairies are real, Memory has enough to handle just trying to stay alive. Chased by wizard hunters, hunted by a dragon, stalked by a strange, handsome savage, despised by the fae and wanted by the king himself – everyone is after Memory, and she suspects it’s not just for her eye-catching outfit. Her forgotten past holds dangerous secrets that will change everything. Memory will fight to get back to a family and home she can’t remember but desperately desires, even at the cost of new friendships and romances. On the run with no name and no memories, she thinks she has nothing left to lose. She couldn’t be more mistaken.  (Goodreads summary)

A blending of the modern and the fantastic, Memory’s Wake is the story of a girl from the 21st century who suddenly finds herself in a completely foreign world filled with Fae, magic, evil kings and dragons. With no knowledge of her past, and stuck in a terrifying, unfamiliar present, she has no choice but to accept the offered aid of Eloryn, a girl who promises Memory help in getting her life back. Eloryn, however, is hardly in a better position than Memory having lost her mentor and on the run from wizard hunters who would arrest her for the use of unauthorized magic. And both girls must learn to trust one another if they are to reach safety and help. 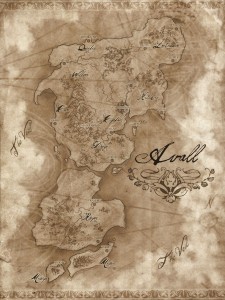 Avall, the mysterious world Memory finds herself in, is beautifully rendered by author and artist Selina Fenech, and is also wonderfully supplemented by a gorgeous map. In Avall, Fae and humans coexist knowingly with each other under the Pact – an agreement which gives humans the benefit of magic while the Fae in return receive a safe place to live. The existence of the Fae — both Seelie and Unseelie —  in Avall gives the land a sense of danger since  faeries are at nature a duplicitous and tricky people. In addition to the dangers of the Fae, Memory, Eloryn and their friends find themselves running from human dangers as well. Avall is currently ruled by the evil king, Thayl, who usurped power from his deceased-by-means-most-suspicious predecessor, Queen Loredanna. Since ascending the throne, he’s severely limited the use of magic among humans and hunts down those who practice more than the most basic of spells. Simply put, Avall – its locations, inhabitants, history and current political climate – is an extremely fascinating place, large in scope and I cannot wait to explore it further.

Characterization as a whole was well done. Having four main protagonists who all do double-duty as narrator, it could be difficult to make them all unique enough — for them to have different voices as four individuals would be expected to have. But Fenech manages to give Memory, Eloryn, Roen and Will each their own unique personalities and perspectives.  While there might have been a little confusion on my part from time to time as to who was narrating, the author does a good job at juggling four different viewpoints. The only thing I had an issue with in regard to the characters and their relationships with each other is the fact that there is an excessive  amount of nicknaming that occurs very early on, when the relationships are not yet at a level with the familiarity a nickname implies. 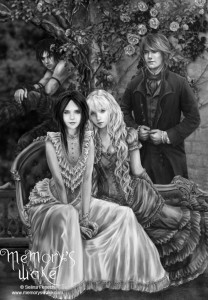 As a heroine, Memory was a refreshing change of pace from the female main characters that normally populate the books I read. While her memory loss and identity crisis give her an obvious vulnerability, Memory is clearly a girl who rarely shows signs of visible weakness.  But her untouchable, tough-girl exterior hides an uncertain and sensitive girl underneath. The shifting POVs are particularly effective in giving the reader a complete view of Memory as a person – how she views herself, as well as how others view her. When Memory narrates, the reader is privy to her doubts, her fears and internal struggles, but when the POV shifts to Eloryn, Roen or Will, the reader sees Memory as those particular characters perceive her and can see the exterior walls she throws up. Projecting an air of confidence and a slight cockiness, Memory has a quick tongue that lends a grounding 21st century perspective to a world filled with magic and antiquated tradition. Memory’s character was one I enjoyed, though at times she came off a bit whiny and petty. Though I suppose this lends a measure of realism to her character. Our heroes require some faults to make them believable.

When Memory first meets Eloryn after falling out of the Veil door, Eloryn is already on the run and the people hunting her will have her at whatever cost. Eloryn — pretty, ever proper, practical, calm and duty-driven — is the perfect character opposite to Memory in personality, though they are perhaps not quite as different in the qualities that truly matter. Eloryn personifies beauty and grace, but beneath her delicate appearance, she is hiding a dangerous secret – one that threatens them all and one that demands unflinching loyalty from those who would call themselves friend.

Roen is a character I really wanted to love, but he felt somewhat inconsistent. When the reader first meets Roen, the roguish pickpocket, he is full of swagger, a charming sense of confidence and a sense of honor all his own. However, over the course of the book, Roen loses some of that early confidence that made him so likable.  While still honorable and brave throughout, his charm deflates as his confidence in himself disappears. There’s always the next book, however, and it could be that Fenech is setting his character up for further development.

Will is the character I found the most interesting of all four, main narrating characters, and perhaps that’s because he is the one that is still very much a mystery. Will does get his turn at narration from time to time, but not nearly as much as the other three. His history, strange connection to Memory and his interactions with the Fae make him a very compelling character and I hope Fenech plans to explore him more fully in Book Two.

The story itself was not your typical fantasy, particularly given the fish-out-of-water angle, and Fenech develops some interesting twists in her story that make it fresh and keep it from falling into the “cliché” category. Through her twists, Fenech keeps her characters guessing as to whom they can trust.  This question of where peoples’ loyalties lie makes for an intriguing story as the reader, to some extent, is as much in the dark as Memory, Eloryn, Roen and Will. I enjoy books that are well-written enough to keep me happily guessing. However, many times authors do an excellent job of building the mystery, but fail in the execution of the climax and revelation. When the action finally comes to a head in Memory’s Wake though, Fenech writes a climax worthy of the term.

Overall, beautifully told and illustrated, Memory’s Wake by Selina Fenech is a wonderful young adult, fantasy debut filled with adventure, intrigue and romance. I am definitely looking forward to the next book in this exciting trilogy.

To win your own paperback copy of Memory’s Wake by Selina Fenech, click HERE 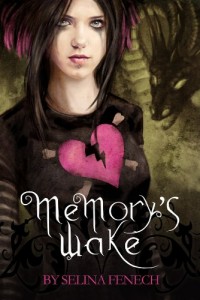