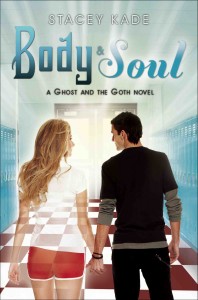 The Ghost and the Goth, Book #3

I’ve been trapped in the body of Lily “Ally” Turner for a month now. Talk about a fashion crisis on an epic scale. What worries me more, though, is sometimes I catch Will looking at me like he thinks I’m Lily…or that he wishes I were. Without the good looks of my former self, I don’t know who I am, or if who that is is good enough. I need out of this mess. Now.

Will and I have been looking for a solution, one that would separate me from Lily without killing her. But it’s not going well. Then, when it seems like things couldn’t get any worse, we run into Misty, my former best friend and boyfriend-stealer extraordinaire, who claims she’s being haunted…by me. Seriously?

I’ll admit it. It’s really weird to look at Alona but see Lily. I do know the difference, though, contrary to what Alona might be saying. And Alona is more than a pretty face to me, not that she would believe that.

Our one lead for some help in this messed up situation might be a page torn from the yellow pages-—the “Psychics” section-—I found in my dad’s stuff. One of the “fakes” seems a bit more real-—and odd-—than the others. Before I can investigate further, though, Alona is off and chasing a ghost that’s probably nothing more than a figment of Misty’s guilty imagination. Now Lily’s family is freaking out because she didn’t come home, my mom is ordering me to stay out of it, and something is definitely wrong with the person formerly known as Lily “Ally” Turner…

So… I LOVE, and I do mean LOVE, this series so far.  Will and Alona are some of my all-time favorite book characters and their “on-page” chemistry is just some of the funniest and acerbic yet sweet and poignant I’ve had the pleasure of reading.  Kade has done a fabulous job with this series thus far and I’m excited to see where she takes it in Body & Soul.