The Picture of Dorian Gray meets Pride and Prejudice, with a dash of Dr. Jekyll and Mr. Hyde.

New York City, 1882. Seventeen-year-old Natalie Stewart’s latest obsession is a painting of the handsome British Lord Denbury. Something in his striking blue eyes calls to her. As his incredibly life-like gaze seems to follow her, Natalie gets the uneasy feeling that details of the painting keep changing…

Jonathan Denbury’s soul is trapped in the gilded painting by dark magic while his possessed body commits unspeakable crimes in the city slums. He must lure Natalie into the painting, for only together can they reverse the curse and free his damaged soul. (Goodreads Summary)

Drawing on the great literary influences of Oscar Wilde, Robert Louis Stevenson, Jane Austen and Sir Arthur Conan Doyle in style and tone, Leanna Renee Hieber brilliantly captures that same magic in Darker Still which makes these authors so notable. With elements of the strange and mystical, with a sense of humor and a frankness about the nature of man and utilizing the beautiful, poetic language style of the 19th century, Darker Still is most certainly an homage to these masters, while also being an original story that’s all its own – an achingly romantic, Victorian paranormal mystery about a man who’s trapped in a cursed painting and the girl who longs to free him.

The novel begins with the introduction of the heroine, Natalie Stewart. Recently returned home from an asylum for handicapped girls, seventeen-year-old Natalie finds herself faced with the uncertainty of “what is to be done” with her. A victim of her own emotional trauma, she has not spoken a word since her mother’s tragic death thirteen years prior. As a disabled young woman of upper middle class means living in 1880s New York, her prospects for the future are slim indeed. But rather than play the victim, Natalie shows herself to be anything but. Her years of silence have afforded her the opportunity to study the world around her and because of this she is a keen observer of human nature, displays great powers of deductive reasoning, and is an excellent judge of character. She is a girl who – though occasionally plagued by common, minor insecurities – knows herself and is a person comfortable in her own skin. She displays a refreshing confidence, a passion for life, a wonderful independence, and is remarkably courageous and cool-headed in the face of dangers both tangible and intangible.

Due to the fact that Natalie is mute, the story isn’t merely told by a typical first or third person narrator, but rather is recounted in an epistolary format through entries in Natalie’s diary. Natalie has a wonderfully straightforward, yet eloquent voice through her written accounts. Her narrative is vividly detailed, and whether she’s describing a private moment with Denbury or a scene of absolute horror, her use of language is consistently beautiful. While still a form of first person narration, the use of the diary as narrator has the connotation of being more intimate and personal – the feeling that the reader is being allowed a unique view into the mind of Natalie – and this narration style is used to great effect by Hieber.

From the moment Natalie describes seeing Lord Denbury’s portrait for the first time, she is utterly captivated by him, like a moth to flame. Hearing rumors that the painting may be haunted, Natalie herself witnesses strange circumstances surrounding Denbury’s portrait. And then one fateful day, Natalie discovers the truth behind the painting and its handsome subject. She vows to help him escape his cursed prison, and as they explore the mystery of his supernatural entrapment, Natalie finds herself hopelessly falling for him. Ever a gentleman, but with just enough roguishness to make a girl’s toes curl, Denbury is kind, compassionate, slightly tortured, protective and ever so charming. Their resulting relationship – their conversations and encounters – is what makes this novel such a page turner.

In regard to the story itself, Spiritualism plays a large role in the plot and world-building of Darker Still. A movement that gained immense popularity in the United States just before the Civil War and into the late 19th century, Spiritualism promotes the idea of the immortality of the soul — that the spirits of deceased individuals can communicate with those still living through persons who act as mediums. Proponents of Spiritualism believe that spirits often reveal things about the beyond, give advice to the living, and that these souls have reached a higher plane of existence. Using Spiritualism as the foundation for her world-building, Hieber has created a world in which magics and, both good and evil, battle for supremacy. It’s a fascinating world, and one with a capacity for great darkness. While the rules of this spiritualistic, 19th century universe have been explained to some extent in Darker Still, it remains shrouded in mystery, hopefully to be revealed more fully throughout the rest of the series.

With heart-pounding romance, an imaginative plot worthy of Wilde and Doyle, and an endearing heroine, Darker Still is a brilliant homage to classic literature and a wonderful introduction to the Magic Most Foul series.

*Due to some mature content I’d recommend this novel to the upper YA audience.

Check back tomorrow for a special guest post by Leanna Renee Hieber and a giveaway for a signed copy of Darker Still!!! 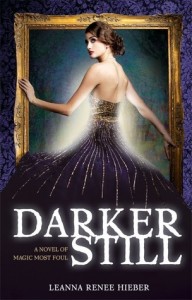