When Psyche receives a prophecy gone horribly wrong, she learns that even the most beautiful girl in Greece can have a hideous future. Her fate? Fall in love with the one creature even the gods fear.

As she feels herself slipping closer into the arms of the prophecy, Psyche must choose between the terrifyingly tender touch she feels almost powerless to resist and the one constant she’s come to expect out of life: you cannot escape what is destined. (Goodreads summary)

A beautiful mortal beloved by Greece, cursed by a goddess, adored by a god and the slip of an enchanted arrow that initiates an epic romance. So begins the story of Psyche.

Psyche, a young Grecian princess whose beauty rivals that of the legendary Helen of Troy, has the good fortune, or perhaps great misfortune, of being noticed by the goddess Aphrodite. When Aphrodite suddenly claims Psyche as her daughter among mortals, she requests only one thing of Psyche in return for this great honor – to marry Aphrodite’s mischievous, womanizing son, Eros. Both Eros and Psyche are taken aback by this request and each offended by the other, refuse the goddess’s demand. Angered by their refusal, Aphrodite curses Psyche to fall in love with a hideous monster and orders Eros to carry out her punishment, setting in motion a chain of events – betrayal, deceit, tragedy, romance – that unfolds in ways Psyche and Eros never expected.

Harrell has done an excellent job of honoring this beloved myth and remaining true to the basic plot of the original story, while at the same time putting her own unique spin on it. Using a modern vernacular and a heroine with more modern sensibilities, she has successfully updated Psyche & Eros for a 21st century, young adult audience while still keeping her story set in it’s originally intended time period. Typically, I am not a fan of period stories that sound too modern, or that seem unauthentic in historical context. With the Psyche myth in particular, it’s a question of how to make it relevant to today’s YA audience without taking the myth out of it’s historical or cultural context.  If the myth of Psyche was brought into a more modern setting, the situations and actions of the characters most assuredly would not translate well. Leaving Destined in the time period it was written, Harrell has brilliantly blended the past and the present – modernizing the story just enough through her characters and dialogue – but leaving it in a context in which the story still makes sense.

Several generations after the Helen of Troy debacle, Psyche innocently agrees to sit for a portrait, not knowing that her face would become instantly famous and beloved by all of Greece – her fame also drawing the notice of Olympus. Psyche should find all the attention exhilarating but she soon feels trapped, a prisoner in her own home, her anonymity gone. Her feelings – relayed to the reader through a first person point of view – about her new-found fame and her uncertain future make her a very relatable character. Though now a celebrity, Psyche never lets her new status influence her character for the worst. She’s an incredibly grounded young woman who’s fiercely independent, extremely intelligent, insatiably curious, a bit rash, stubborn, and proud – yet humble enough to admit her mistakes. She is a young woman trapped by fate, yet strong enough to accept her destiny, whatever that may be.

Eros’s character was a pleasant surprise and I wasn’t expecting to like him as much as I did. In reading Greek mythology, I’ve come to have a complete sympathy for the mortals in the stories. Often a victim of the gods’ wrath or petty jealousy, human lives are tragically altered time and time again usually for something as small as a perceived slight, a desire to protect one’s well-being, the love of another, etc. – things that we today would consider small offenses or even reasonable motivations. To my 21st century mindset, the humans in myth are often unjustifiably punished and the gods appear as petty, vindictive and fallible while wielding unimaginable power. Incredibly powerful AND fallible? Not an inspiring combination.  In addition to all the less-than-ideal qualities I’ve listed above, the gods also aren’t particularly known for their romantic fidelity either.  So even though he bears the title “god of love,” I was understandably curious as to how Harrell would convince me, the reader, to fall in love with Eros. However, as she developed his character, Harrell convinced me that Eros might just be worthy of Psyche. While Eros was mischievous and arrogant, at times he allowed himself to feel genuine sympathy, and to consider how mortals would be affected by certain actions. Though always a god and everything that entails, he was willing to acknowledge the value of human beings and didn’t just view them as mere playthings. He showed a great capacity for kindness throughout the book, and this is ultimately what won me over to Team Eros.

The evolution of the relationship between Psyche and Eros is really the central part of this myth and the driving force behind the plot. I loved how Harrell developed them both individually as characters and how she developed their romance as well. It is sweet, it is passionate and at times it is oh-so-heartbreaking. But above all, the thing I loved most, was that they had a genuine, believable connection that made me root for them and hope that even though their relationship defies their individual fates, that somehow they will be able to find happiness with each other.

Overall, with fantastic modernized characters and adding her own unique tweaks to the original myth, Destined by Jessie Harrell is a smartly updated and incredibly romantic retelling of Cupid & Psyche that made me fall in love with this myth all over again. This is a book I’ve been highly anticipating for some time, and let me assure you, it was totally worth the wait.

Check out my November New Release Giveaway to win a paperback of Destined! (INTL) 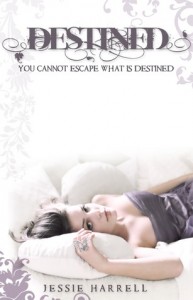