Many thanks to netGalley and Egmont USA for the e-Galley of Tris & Izzie.

Izzie, the daughter of two magical parents, leads a rather charmed life. The social queen bee of her high school and dating the most popular athlete in school, she’s never been bothered by her apparent lack of magical abilities. Izzie wants steady, normal and non-magical, and that’s what she’s sure she has. But after a confrontation with her best friend Branna sends her looking to the magical world for a solution, she meets new student Tristan and her plan to help Branna instantaneously backfires. In one moment, the bottom drops out from Izzie’s world and her life is forever altered. She finds herself undeniably drawn to Tristan, struggling between her feelings of longing and her perpetual annoyance with him. However, as she attempts to distance herself from him, Tris & Izzie only seem to grow closer.  As their relationship, or non-relationship, develops, Izzie begins to learn more about herself, her family and her place within the realm of magic.

From the hauntingly romantic cover to the intriguing blurb, I’ve been eagerly anticipating losing myself in Tris & Izzie’s story. Unfortunately, it didn’t quite live up to my expectations. Characterization, as I’ve probably mentioned before, is one of my biggest factors for either loving or disliking a story. The characters need to feel real through a combination of their mannerisms, their thoughts, their personality, their flaws, their consistency, and their depth. I don’t need to fall in love with every character I read, but I need to know that the author knows their characters inside and out. That they can anticipate their characters’ movements, know what they will say and how they will react when situations arise. The characters need to feel like living, breathing people that could walk right off the page. None of the characters in Tris & Izzie feel whole. They are extremely one-dimensional, which is somewhat surprising given that the book is written from Izzie’s first person perspective and therefore the reader is given the benefit of knowing her better through her internal dialogue. Izzie herself comes off as flighty, shallow, and disingenuous, although I’m pretty sure that wasn’t how the author is trying to portray her. The characters are a bit inconsistent, especially Mark, and I never felt like I knew any of them very well, nor did I even like them. Part of the reason for this maybe that this is an adaptation of the 12th century legend, “Tristan & Isolde.” I think that the author tried to convey a bit too much of that entitled, royal arrogance in her modern characters, but while that might work in a feudalistic/medieval setting, it did not translate well into a 21st century high school environment. Wanting to exile a fellow student from a click, thinking it’ll make him change schools? Wow. Moments like this, and there were a few, made the characters I am being asked to like look self-important, cruel and snobbish.  And as I said before, I’m not sure that is Harrison’s intention.

In conjunction with character development, the dialogue in this book is, in a word, painful. The conversations rarely flow naturally and many of the characters’ verbal responses are confusing, trite and, at times, unintelligent.

Harrison’s world building left much to be desired as well. I have been asked, especially in the genres I read, to believe a lot of impossible and sometimes ridiculous things about fictional worlds and realities; things with which the proper explanation, rationale and the right amount of urgency I can get on board with. I never felt like I had a clear view of Izzie’s world – the structure or the rules. Don’t get me wrong, I love discovering the world right alongside the characters, but when new elements are constantly added with little explanation, it makes the story hard to follow.  It’s like that kid in elementary school who keeps adding new rules to a game you are already playing. Things that I felt should have been clear aren’t adequately expounded upon, and ultimately, I just can’t wrap my head around what Izzie’s world is supposed to look like or how it works.  It just lacks depth and cohesion.

The story itself is pretty well paced. The action moves along well, but even the plot is a little lackluster. When I finally reached the climax, it seemed very contrived and I just didn’t feel the sense of horror, trepidation, or desperation I should have felt reading such a scene. Honestly, I think by then I had just stopped caring.

In conclusion, Tris & Izzie was an unfortunate disappointment for me on so many levels. Another reminder that a gorgeous cover doesn’t necessarily reflect the story within. 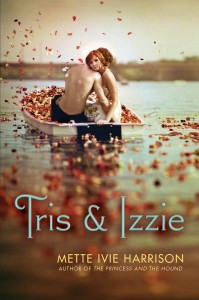