Princess Aurelia is next in line to rule the kingdom of Tyralt, but she would rather be one of the common folk, free to learn and roam and… not marry the next tyrannical prince that comes courting. Naturally, the king wants Aurelia to marry for political power. Aurelia wants to marry for love. And someone in the kingdom wants her… dead. Assigned to investigate and protect Aurelia is Robert, the son of the king’s former royal spy and one of Aurelia’s oldest friends. As Aurelia and Robert slowly uncover clues as to who is threatening her, their friendship turns to romance. With everything possible on the line, her life, her kingdom, her heart, Aurelia is forced to take matters into her own hands, no matter the cost. (Goodreads summary)

Heir to the throne of Tyralt, Aurelia is a princess fed up with tradition and the status quo who craves the chance to make a difference. An adventurous soul, she often ventures out of her gilded cage in disguise giving her the opportunity to better know her future subjects – to familiarize herself with their lives, their hardships, their fears and their hopes. She is a young woman with a compassionate heart, but also a girl who is mindful not to wear that heart on her sleeve when it comes to her personal hopes and dreams. Under the constant scrutiny of the royal court, her future subjects, and her household, she’s careful with what she reveals to others and doesn’t have many people she can call a true friend due to her position and status. She’s a girl who longs for adventure, romance and travel, but who is pragmatic enough to realize that these experiences may never be an option for her. This compassionate, dreamer side of her personality is tempered by her stubbornness and her tendency to be very opinionated and outspoken. Aurelia is a person who knows who she is, who isn’t afraid to speak her mind and who has a strength of will and a love for her people that’s necessary in a good ruler. I found Aurelia to be one of my most favorite parts of this novel and I really enjoyed her character.

On the evening of her sister’s coming out party, Aurelia’s old school friend Robert returns from a four year absence and suddenly, her old childhood friend has transformed into a handsome young man with whom she wants to become reacquainted. Little does she suspect about his purpose in being there and his motivations for doing so. While being an interesting character, Robert, unfortunately wasn’t one I connected with, and I’m still trying to figure out exactly why. His character was adequately developed for the most part, but perhaps it was that his voice felt a little too much like a male character being written from a female perspective.

Typically, I adore story lines where childhood friendship develops into romance; however, that wasn’t the case with Aurelia. While sweet and moderately enjoyable, the romance was underdeveloped and at times one-sided. Robert, either subconsciously or consciously, has been in love with Aurelia since they were young, and his sole purpose in returning to the court of Tyralt is to keep Aurelia safe from the threats on her life. The book is written, like many of the books I’ve read recently, from alternating points of view. Robert, in his chapters, leaves no question as to how he feels about Aurelia. Aurelia on the other hand was harder to gauge. Not that she had to be a silly, sentimental, giggly girl about Robert, but a little more insight into her feelings about him would’ve been nice, and would’ve made the romance feel more complete.

In addition to the romance issue, I wish that Aurelia’s world had been more fully revealed. After finishing the novel, I feel as though I was allowed a tiny glimpse of her kingdom and universe but nothing more than that. Osterlund includes mentions of places and peoples beyond the walls of Tyralt, yes, but even the world inside the walls felt a bit shrouded in mystery. The court, the commoners, palace life and affairs, the frontier, all these things had “cameos” in the story but weren’t explored very deeply. I tend to enjoy extremely detailed worlds, worlds that feel like they could actually burst to life, that are rich with histories, traditions and a set of rules as to how it works. And I do realize that some authors prefer to be more minimalist in describing their settings and character surroundings; it could be a stylistic preference that I’m just not meshing with. I have an inkling that my world-building issues will be dealt with more thoroughly in Exile, the sequel to Aurelia.

In regard to the actual story however, I will say that the mystery was pretty compelling. When all was finally revealed, I had an “Aha!” moment… and I really do love when that happens – when the revelation makes sense and even manages to surprise me. When all the breadcrumb trails come together into a smart, well-done and satisfying conclusion.

I do love a good mystery.

Overall, Aurelia boasts a lovely and strong female lead and an intriguing mystery. If either of these things float your particular boat, then I’d recommend checking this novel out. As for me, I am interested enough in continuing on to see where Osterlund takes Aurelia and Robert in their next book, Exile. 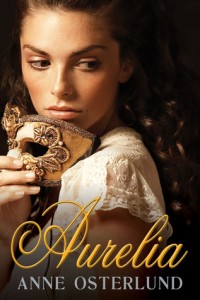