What if the characters in a vampire novel left their world–and came into yours?

Amy is in love with someone who doesn’t exist: Alexander Banks, the dashing hero in a popular series of vampire novels. Then one night, Amy meets a boy who bears an eerie resemblance to Alexander. In fact, he IS Alexander, who has escaped from the pages of the book and is in hot pursuit of a wicked vampire named Vigo. Together, Amy and Alexander set out to track Vigo and learn how and why Alexander crossed over. But when she and Alexander begin to fall for each other, Amy wonders if she even wants him to ever return to the realm of fiction.  (Goodreads summary)

Being a diehard fan of several book series myself, the premise of The Vampire Stalker with an obsessed fan girl finding out that the her fictional book boy crush actually exists, appealed to me. However, while the story at it’s most basic was interesting, the execution of the story – especially in regard to characters and credibility – left a little to be desired.

By now it should be apparent that I am a fan of character-driven books that boast well-developed casts. Unfortunately, in The Vampire Stalker, I just couldn’t seem to generate any kind of connection to any of the characters, even the main protagonist Amy.

Amy is a girl who has fallen in love with her universe’s equivalent of Twilight and its hero, Alexander Banks, vampire hunter extraordinaire. Amy at first appears as bookish and slightly nerdy, not really part of the popular crowd, but then later in the book she’s clubbing it up and playing it cool. Not that you can’t be bookish AND be a party girl, but she just seemed inconsistent somehow. I couldn’t peg Amy’s personality and I became so preoccupied with trying to figure her out that I never made a real connection with her character.

I also wasn’t able to jump on the “Alexander-Banks-is-dreamy” bandwagon. He was a character that held the reader at arms length – distant. Everything that gave him depth the reader is told outright, leaving little to be discovered.  Another barrier with Alexander is that van Diepen gave him a very affected way of speaking. He is supposed to have a more antiquated vocabulary and style, but it came off as forced, unauthentic and pretentious. It was off-putting to say the least, and his odd word choices and phrasing jarred me out of the story on numerous occasions.

The credibility in this story was also an issue for me. I won’t go into detail about what specifically bothered me, as I don’t want to ruin the story for any who might be interested in reading it, but how events unfold – the resulting explanation of events and even some character responses to those situations – I found completely implausible. I’m willing to suspend disbelief when reading the paranormal/sci-fi genres, but the author has got to sell me on the mechanics of their world, their science, the magic or whatever is the cause of events unexplainable, and for whatever reason in The Vampire Stalker, I just wasn’t buying.

I also had issues with the one dimensional villain, the slightly foundation-less romance that bordered on insta-love, and a small PSA about standing up to bullies that felt like a tagged-on afterthought.

Overall, The Vampire Stalker was a great diversion while I was stuck on a cross-country flight. As the rating says, it was “fun, but not a favorite.” Truly, it wasn’t all bad but I just couldn’t get over those few hang-ups to really enjoy it. 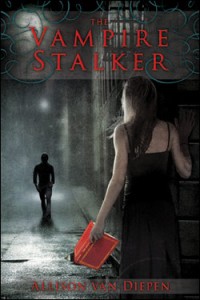