What would you risk for the love of a brother?

What was once the western United States is now home to the Republic, a nation perpetually at war with its neighbors. Born into an elite family in one of the Republic’s wealthiest districts, fifteen-year-old June is a prodigy being groomed for success in the Republic’s highest military circles. Born into the slums, fifteen-year-old Day is the country’s most wanted criminal. But his motives may not be as malicious as they seem.

From very different worlds, June and Day have no reason to cross paths – until the day June’s brother, Metias, is murdered and Day becomes the prime suspect. Caught in the ultimate game of cat and mouse, Day is in a race for his family’s survival, while June seeks to avenge Metias’s death. But in a shocking turn of events, the two uncover the truth of what has really brought them together, and the sinister lengths their country will go to keep its secrets. (Goodreads Summary)

Set in a futuristic Los Angeles, the world of Legend is both oddly familiar and completely foreign. The United States no longer exists, and the western states have been enveloped into a new governmental entity known as the Republic – a militaristic state ruled by the ever-elected Elector Primo and Congress. Individual freedoms have been severely limited by the government and every citizen, at the age of 10, is required to take a trial or a test that will determine the course of one’s life from that day forward. If a child scores high enough they will be granted a college education and a promising future with the Republic. If too low a score, the child will be sentenced to a life of dangerous menial labor, poverty and possibly infection by plague. Those who fail the test completely are sent to labor camps, all in service of the glorious Republic and Our Father, the Elector Primo.

Day is a boy who failed the test, a boy who knows firsthand the truth about what happens to the children who don’t pass the the Republic’s trial. Having escaped his fate, he now creates as much trouble for the Republic as he can by destroying military property, stealing supplies, and hindering the war effort against the Colonies. He steals, bets, and scrounges to survive on the streets, constantly on the watch for Republic patrols who consider him enemy number one. Intelligent, intuitive, confident, and endearingly cocky, Day is a hero and a symbol of hope for the Republic’s less fortunate.

Day’s primary concern though is caring for his family who, with the exception of his brother John, think him dead. He checks in on them from afar, provides for their needs when he is able and receives updates on their situation from John. When his family’s front door is suddenly marked as infected by the plague patrols, Day is consumed by one goal only, an objective that will lead him down an irretraceable path.

June, on the other hand, was born into a life of privilege. On her tenth birthday she aced the Republic’s trial becoming the only child to ever receive a perfect score. Now, the Republic’s golden girl, she is receiving the best education possible, being prepared for a much-anticipated military career in service to Elector and country. Incredibly bright and often bored with her studies, June is something of a troublemaker at her university, challenging herself to new heights of achievement with stunts that are frowned upon by school officials. However, once her brother is murdered, June is pulled out of training and put into the field. No one has been able to catch the elusive miscreant-turned-murderer known as Day, and if anyone has a chance of catching him June’s superior officer is betting on the Republic’s vengeance-seeking, star pupil.

In addition to being extremely intelligent, June also displays a fierceness, a strategic mind, a sense of decency, and a hyper-intuitive eye. She is tough as nails, but she has a complete love for and an unshakable loyalty to her brother. Because of this vulnerability – this decision to love her family above the State – June becomes more likeable and more than just another mindless, propaganda-spouting drone. For readers who appreciate a strong, independent female lead, June is sure to please.

One of the recurring themes that appear in dystopian novels seems to be that of the state vs. the individual. It’s fascinating how a group of people, such as the Republic soldiers, can be indoctrinated to the point that their compassion for the individual is no longer a factor in their thought process – that a single human life or multiple lives can be stolen without a second thought, without any empathy at all. The Republic pawns have been robbed of their conscience, or perhaps they consciously choose to ignore that little nagging doubt, so that they may instead enjoy power, privilege and safety. It just never ceases to amaze how people can go along with such atrocities so blindly, and more horrifyingly perhaps, believing in the rightness of their actions. The overall blind devotion to the State, the unwillingness or inability for independent analytical thought, the substitution of the government modus operandi for one’s personal/religious moral code is terrifying, and Lu communicates this very effectively.

In addition to the wonderful characters and the interesting themes, the plot of this story is also very compelling. While not, perhaps the most complicated of mysteries when all is said and done, it’s woven together well, and half the enjoyment of the mystery lies in the way that it’s presented, is it not? It’s well-paced, the danger is convincing and Lu is able to capture a real sense of gravity — a sense of helplessness and pain in the face of overwhelming odds — and it propels the reader through this story with the hope that June and Day will somehow be able to overcome the obstacles they face.   Told in tandem by June and Day, Legend is yet another book that employs a shift in first-person narrator from chapter to chapter. And it is another book that uses the device quite well, as the reader is given a front row seat to June and Day’s thoughts and motivations. 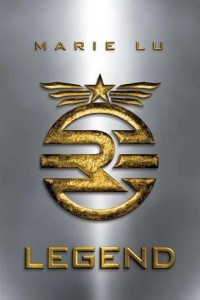