While other high school seniors are dreaming about their futures, Sophie and Carter are just trying to make it through each day. Carter is overwhelmed by issues at home as he struggles to support his mother. Meanwhile, next door neighbor Sophie is left to care for her three younger siblings in place of their absent and troubled mother. All that holds these two best friends together is each other, and knowing that each night they’ll sit together on Sophie’s front porch swing and escape from reality, if just for awhile. But as their relationship reaches a turning point and high school graduation nears, will their friendship become something more? (Goodreads Summary)

Each a victim to terrible domestic situations, Sophie & Carter have grown up side by side, for years finding solace only in their mutual understanding of each other’s difficulties and their quiet, unconditional friendship. A beautiful book about the real, solid kind of love, Chelsea Fine has written a simultaneously heartbreaking and heartwarming story about the perseverance of the human heart, second chances and the people who get us through.

For all intents and purposes, Sophie and her younger siblings, whom she affectionately dubs the Little’s, have been abandoned by their drug addict, prostitute of a mother. 18 year-old Sophie is left not only to fend for herself, but also the three Littles as well. She worries about things that in an ideal world kids shouldn’t have to deal with, such as having enough food to eat, being evicted from their home and paying the electric bill. Selfless and loving, Sophie is an amazing character. Never once did she bitterly resent the fact that this was her lot in life – that she had lost her childhood to become essentially mother and caregiver to her brothers and sister. Instead, she “loves their guts” and constantly tries to shield them from their reality and the truth about their mother. In a cruel world where drugs and abandonment threaten to destroy their family, Sophie steps in and fills the void in the Little’s lives by giving them as much stability and normalcy as she can. She’s an admirable character – a character who both broke my heart and encouraged it.

By the same token, Carter’s life is no better. Growing up under the heavy fist of an abusive father, Carter bears scars both inwardly and outwardly. After his father finally leaves them for good, his mother relinquishes what’s left of her sanity and Carter, not wanting to give up the only family he has left, becomes her caretaker. His daily struggle balancing the memory of who his mother used to be and who she has become is an intensely painful one, but he like Sophie, endeavors to keep what is left of his family together. Carter is sweet, generous, unselfish and fiercely protective of both his mother and of Sophie and the Littles.

Amidst the tremendous amount of pain, stress and past emotional trauma, Sophie & Carter find strength and motivation in their friendship. It’s a quiet relationship full of silent understanding and unconditional acceptance, and their nightly talks on the porch swing – the simplicity of just being together – gives each of them the push they need to make it through the next, inevitably difficult day. Their love for each other is pure and selfless. They’ve seen one another at their lowest and at their strongest and their affection is not some fleeting, superficial thing. It has deep roots and is based in reality, on the knowledge of the other person’s character. But will they realize how deep their love for each other is? Is a happily-ever-after even possible for them?

A very quick read at less than 120 pages, Sophie & Carter is technically considered a novella. The length of this story was perfect and the plot very well-paced.  Even though it was shorter, it didn’t feel truncated or incomplete. Told from both protagonist’s alternating perspectives it gives an unadulterated view into each character’s feelings, thoughts, and motivations.  The book is always moving forward, each alternating narrative usually picking up the story right where the other left off.   It’s a  storytelling device that is wonderfully executed by Fine.

Overall, Sophie & Carter is a book that tugs on the heartstrings — a book about pain, sadness, consequences and tragedy, but most importantly,  it is a story of hope and the strength of unconditional love. 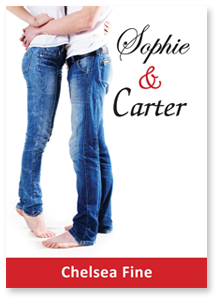