Will Elise’s love life be an epic win or an epic fail?

At Coral Tree Prep in Los Angeles, who your parents are can make or break you. Case in point:

As the son of Hollywood royalty, Derek Edwards is pretty much prince of the school—not that he deigns to acknowledge many of his loyal subjects.

As the daughter of the new principal, Elise Benton isn’t exactly on everyone’s must-sit-next-to-at-lunch list.

When Elise’s beautiful sister catches the eye of the prince’s best friend, Elise gets to spend a lot of time with Derek, making her the envy of every girl on campus. Except she refuses to fall for any of his rare smiles and instead warms up to his enemy, the surprisingly charming social outcast Webster Grant. But in this hilarious tale of fitting in and flirting, not all snubs are undeserved, not all celebrity brats are bratty, and pride and prejudice can get in the way of true love for only so long.

Loosely based on Jane Austen’s Pride & Prejudice, Claire LaZebnik’s Epic Fail is a wonderfully re-imagined homage to the classic love story of the headstrong, opinionated Elizabeth and the intimidating, aloof Mr. Darcy. Retold in a modern day setting for young adults, LaZebnik successfully captures both the magic of Austen’s story as well as the social differences and hierarchy of 19th century England against the backdrop of a Los Angeles prep school and American Hollywood “nobility.”

If the setting of this book is perfect, the characters are even more so. Austen was a master at capturing the essence of people – their foibles, vices, inconsistencies, etc. Her works were very much a commentary on the society of her time, the good, the bad and the ironic. LaZebnik has taken this and created a whole new set of characters that work within her modern setting, who are also are a social product of their era, but who still retain the same basic attributes of their 19th century counterparts. The similarities are just so cleverly executed and discovering them was part of what made this book so enjoyable.

Mr. Benton & Dr. Gardiner (aka- Mr. & Mrs. Bennet) are still the eccentric odd couple. Mr. Benton is a scholarly man who spends a lot of time in his study reading and bemoaning the decline of America’s value system. Dr. Gardiner is the new principal of the Benton girls’ school, fashion-challenged, slightly petty and starstruck by the social status of her students’ parents. Juliana is the quintessential Jane – kind, good, quick to believe the best in people and so sweet. Her love interest, Chase, differs a bit from Austen’s Bingley but for the better– he’s a bit more assertive and not quite as ineffectual while still being very friendly and kind. Layla is a perfect Lydia – a 14 year-old social climber who is boy-crazy and who is completely unaware of what is appropriate and what is not.

Elise, the protagonist of this story, is a brilliant tribute to Elizabeth Bennet. Fiercely independent, smart, practical, lovably random with her own quirky and wry sense of humor, she is at times blinded by her own assumptions. However, she is also wise and mature enough to admit when she assumes incorrectly. She is a keen observer of human nature and it’s interesting to view the cast of characters through her intelligent and discerning eyes.

Derek, the male lead and main love interest, probably had the hardest role to fulfill – that of the inestimable and beloved Mr. Darcy. And he does fill those giant shoes quite well. Standoffish, terse, presumed to be arrogant and unfriendly, yet at times heartachingly vulnerable, Derek presents a confusing and infuriating challenge to Elise. Her sister and best friend, Juliana, has just fallen for Derek’s best friend, Chase.  As a result, the two of them are continually (and awkwardly) thrown together in all kinds of social situations. As Derek and Elise get to one another better, they have the opportunity to be witness to each other’s true character. And in the end, they may realize that their opinions of one another are not as accurate as they both initially thought.

At this point in the review, it’s important to note that while this story is a self-described, re-imagining of Pride & Prejudice, LaZebnik has not merely retold the same story.  She has taken the bare bones that Austen provided and has created something new and unique that Austen fans and the unfamiliar reader alike will enjoy.  Homage or not, there are many things that remain universal that readers will appreciate. The romance is sweet. The relationships feel genuine. The girl/sister drama is just so spot-on and hilarious. The characters are well-developed and unique. The teen issues addressed are relevant.  Epic Fail is a beautifully written novel and, personally, it  satisfies that Austen craving that surfaces every once in awhile. 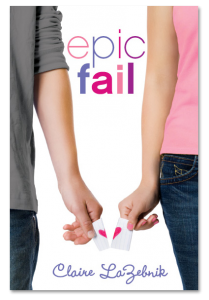 Source: Won in a giveaway from Lisa @ Badass Bookie (Thank you!!!)

Check back soon for a giveaway of Epic Fail!!!