Samantha Ruiz has a freak gene that turns her invisible. She can’t control it, and it’s getting worse. Afraid of becoming a lab-rat, Sam keeps her ability secret, until fellow runner Will Baker sees her vanish into thin air. Will promises secrecy and help, and Sam begins to fall in love.

Together, the two discover there are worse things than being a scientific curiosity. Someone’s been killing people who possess Sam’s gene. A mysterious man from France sends letters that offer hope for safety, but also reveal a sinister connection with Nazi experiments.

The more time Sam spends with Will, the less she can imagine life without him. When Sam uncovers secrets from her past, she must choose between keeping Will in her life or keeping Will safe. (Goodreads Summary)

A blend of science fiction, historical novel, thriller and romance, Rippler was an incredibly intriguing story that I just couldn’t put down. Told from the perspective of Samantha Ruiz, Swanson crafts a compelling mystery surrounding a rare genetic disease, interspersing Sam’s story of discovery with passages of an old journal written by a Nazi scientist who conducted rather horrendous psychological experiments during WWII. I found this blending of the past and present fascinating and very well paced. For just as I am about to sigh blissfully from the sweetness that is Will & Sam, Swanson reminds us again and again in increasingly disturbing ways that all is not well — that the situation is serious and dangerous. It’s shocking and unsettling, and it is good storytelling.

Sam was a protagonist that I really identified with right from the beginning. Despite her confusing and sometimes inconvenient new-found ability to ripple – or turn herself invisible – she is very much a normal girl who’s just discovered she’s a little more abnormal than she thought. Just beginning to heal from her mother’s death in a tragic car accident years earlier, Sam doesn’t have a whole lot of people she can call friends. As a result of the trauma of seeing her mother die, Sam spent many years withdrawn inside herself, depressed and lonely. However all that begins to change with the reappearance of an old childhood friend and the arrival of her cute new neighbor, Will. As Sam begins to open up to her new friends, she begins to learn more about herself than she could have ever imagined possible.

While I have never experienced personal tragedy to the extent that Sam has, I can definitely relate to her. She’s someone who has experienced real sorrow, and it has matured her. Although she’s been socially withdrawn since her mother’s death, Sam is not a wall flower, painfully shy or socially inept. Instead, she just needs friends who don’t view her through the tainted lenses of her past, and she finds them in Gwyn and Will. Though she has a lot of the same insecurities most girls share, they’re not debilitating – she’s a confident and intelligent young lady. She’s just a normal girl. I mean, despite the fact that her genes allow her to ripple. Sam is someone I could see myself befriending and I really enjoyed getting to know her character throughout the book.

There were so many things I loved about Rippler, but perhaps the item that tops my list is the friendship between Sam & Will. Swanson did a wonderful job establishing them as good friends before the idea of romantic entanglement surfaced. They have a genuine connection, a comfortableness with each other. I’m of the opinion that relationships tend to be deeper when there’s a well-established friendship at the foundation of the romance. And perhaps I’m just an incurable romantic but there’s something incredibly swoon-worthy about suddenly realizing you’re falling in love with your best friend. Sam & Will are just so sweet and adorable, as is their budding romance, and I can’t wait to see where their story takes them.

One of my biggest hang-ups with plots that delve into the scientific realm is credibility. Sometimes the science is just laughable, sometimes it’s just too vague, sometimes it just doesn’t quite feel plausible. I have no idea how many of the things discussed in Rippler are grounded in actual fact, just theoretical or just plain made up, but Swanson writes with an authority that makes me think it could be. And that’s really what matters. It doesn’t matter how true the science is, it’s a matter of “does the author make me believe it could be?” And she does.

Overall, Swanson has written a thrilling and romantic tale that had me alternately curling my toes in delight and gasping in horror, but that ultimately left me extremely satisfied… or unsatisfied, because I can’t wait to read the next book. 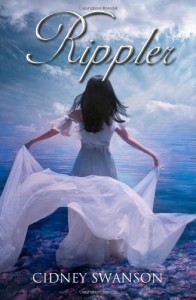