17 yr. old Sophia Jane Blithe is a survivor. From escaping her mentally-ill, homicidal mother to becoming a ward of the state and enduring foster home after foster home, she has learned to keep people at an arms length; to shut down her emotions and desires because people and places are transient and conflict is something best avoided. When she was eleven, she was taken in by the Ackerman family and has seemingly found a safe haven. Just before she’s about to start her senior year of high school, her family finds out that the school districts have been rezoned and Sophia is now to attend Gossamer (a.k.a. Perfect) High. Things are not perfect at “Perfect” High, however, and Sophia finds herself isolated in school where the students treat her as an outcast and her teachers are somewhat indifferent. The only bright spot is meeting Dex, a boy who treats her with kindness and strangely seems to know everything about her.

Props to Naeole for Sophia’s character. Sophia is an incredibly damaged, complex girl. She has carried the weight of her mother’s actions and the stigma of being “The Blithe Baby” her whole life. She believes that somehow that all that’s happened to her is her fault and that she deserves the cards she’s been dealt. She’s of the opinion that she doesn’t deserve love, she doesn’t think she can even feel love for anyone else; she’s just kind of dead inside. So…she’s got some serious self-esteem issues going on. That being said, she’s not a complete doormat, and the introduction of Dex into her life provides her with an avenue of self discovery. Her dependence on Dex worries me a bit though, and I wish she had come out more self-reliant at the end. However, Sophia and Dex’s story is not over yet, so who knows where her character will go in the next few books.

There are some serious issues going on in this book and situations that, if your teens are reading this book, should be discussed with them. The events and circumstances that Sophia already has endured before the story starts and then does endure through the book are enough to land someone in some serious therapy if not a straight-jacket. The affects of mental illness upon loved ones, willing self-destructiveness, low self-esteem, abusive partners, manipulative authority figures, and situations of sexual violation are just a few.  These are characters with serious problems.

The paranormal aspect of this story was surprisingly not as prevalent. In fact, in my opinion, this story could have easily been reworked without it. But as I said, the story isn’t over yet, this is just the first act and Naeole has set it up well for the paranormal part to become the larger issue in the subsequent novels.

This story is very different from Naeole’s Grace series and that in itself impresses me. Even though I think I prefer the Grace series better, she’s created something with Gossamer that’s entirely different and personalities that are unique to this story, not just slightly reworked versions of previous characters.

Verdict: A dark, heavy story and I’m curious to see how Naeole resolves it. 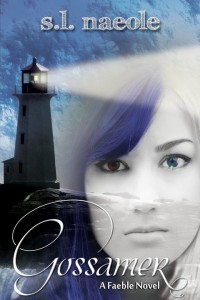 Published: May 17, 2011 by Crystal Quill Publishing

Want to win a book?  Check out our July New Release Giveaway!