When her mother is hospitalized after a mental breakdown, Ashlyn is crushed to have to leave Toronto to go live with her grandmother in Prescott Junction, Maine, where nothing happens. Nothing except for the ghost train that rolls through on the rusted lines on dark nights – the one the townsfolk pretend not to hear as it comes to claim troubled, lost souls. Ashlyn scoffs at the idea … until she witnesses it herself, with its evil, seductive conductor and the wailing of souls trapped on board. The string of unexplained deaths by the tracks throughout the village’s history (Ashlyn’s father included, before she was even born) lends credence to the tale.

As frightened as she is at the conductor’s pull, more terror awaits when the antique radio in her grandmother’s basement comes to life. Ashlyn’s grandmother tells her the radio is a Caverhill curse, and can’t be destroyed or discarded. It keeps coming back, and it keeps broadcasting “reports” of events yet to happen. Her grandmother begs her to stay away from the radio, but Ashlyn cannot help but listen. And to her horror, it tells her she is bound to board the ghost train. Ashlyn will need the help of her newfound friends – the troubled Rachel and the very sexy Caden – if she is going to get through the coming horrors with her sanity intact and her soul unclaimed. (Amazon summary)

Ashlyn’s Radio was one of the creepier books that I’ve read in a while. Ghost trains? Possessed household appliances? A terrifying soul-stealing conductor who is evil personified? An inevitably doomed fate?  Wilson Doherty, a collaborative writing team made up of Norah Wilson and Heather Doherty, did an excellent job of steadily building the mounting tension and using their vivid, detailed descriptions to capture those feelings of pure horror and dread. The radio in particular gave me chills, and I’m sure they’ll be satisfied to know that for the last few nights, I’ve been totally creeped out by the television in my bedroom. You know… just in case it decides to turn on by itself and start spouting dire predictions of the future in technicolor.

Yes. I’m a total wimp with an incredibly overactive imagination. But I digress…

The books I tend to enjoy the most are the ones in which I’m able to create a real emotional connection to the characters or a specific character. For some reason, I had a lot of trouble connecting to Ashlyn in the beginning. I’m still not exactly sure why. But thinking more about it, perhaps it’s because she actually acted more like a typical teenager than most YA protagonists. Most of the heroines in today’s young adult fiction have a real gravity to them, wisdom beyond their years, a better grasp of the consequences of their actions; they’re more adults than kids. And in the paranormal genre, this is due largely to the life-and-death, world-ending situations that authors throw their young characters into. That’s not to say that there aren’t extremely mature teens out there, there are. And that’s not to say I find Ashlyn to be extremely immature, I don’t. I find Ashlyn refreshing in that she acts seventeen – her age. It’s nice to meet a character who’s not a 30-year old trapped in a 17 year old’s body, I just didn’t connect with her as much as I would’ve liked and that might have had more to do with my own age (shhh!) than anything else. However, I think Ashlyn’s character, once she realizes what she’s up against, matures as a result of her situation and I found her a lot more relateable toward the end of the novel.

The character I felt the strongest connection to was Ashlyn’s friend, Rachel. The authors did an excellent job bringing her to life – her vices, fears, her deep-seated emotional troubles, her issues – and they’ve created this wonderfully paradoxical character who is a strong personality, unique and witty and yet completely vulnerable and emotionally broken. This girl has real problems and not just of the paranormal variety. She is a sympathetic character who steals each of her scenes and who sees a real transformation over the course of the book.

Another thing I really enjoyed about Ashlyn’s Radio was the romance. Though slightly venturing into insta-love territory, the detour is forgiven, because Caden is just so adorable, sweet, funny….and a photographer. Their connection feels genuine, even though it develops quickly. Another thing I appreciated about Wilson Doherty’s portrayal of Caden is that he’s a person of color, an African American. How incredibly refreshing! I really believe that racial and ethnic diversity is something sorely lacking in today’s young adult US market and kudos to the authors for breaking out of those stereotypical young adult molds.

While there were many things I loved about Ashlyn’s Radio there were just a few things that didn’t quite work for me. The origins of the train and radio were a little confusing and didn’t thrill me as much as I had hoped. That said, the fast pace and well-crafted tension helped ease some of this. But while the revelations were interesting, I was hoping for that gasp-worthy, “AHA!” moment. I also wish that more of the creepy, small town vibe would’ve been communicated through the residents of Prescott Junction. I felt like I really didn’t get to see much of the town, let alone memorable, quirky individuals. It could be that I read this coming off of a “Haven” marathon – the paranormal SyFy show also set in a creepy, sleepy town in Maine – but I guess I was expecting a little more “Twin Peaks” than I ended up getting.

I also feel it’s important to note that there are some heavier, non-paranormal themes going on in this novel such as abuse, substance abuse, self-mutilation, and to some extent, suicide. I wish that Ashlyn had been a little more proactive about seeking help for those people who had these issues, but the truth is – once again – that Ashlyn dealt with these issues like a teenager probably would. I think it’s important for teens to realize however, that sometimes outside, adult help is needed to ensure the well-being of a friend or loved one.

Overall, Ashlyn’s Radio was a deliciously creepy, fun and fast-paced read that I would recommend to anyone who loves spine-tingling chills and thrills. 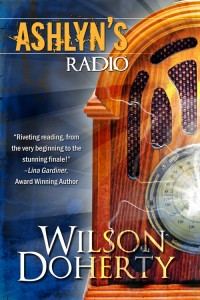