Burn bright, but do not stray from the paths. Remember, when you live in a place of darkness you also live with creatures of the dark.

In Ixion music and party are our only beliefs. Darkness is our comfort. We have few rules but they are absolute . . .

Retra doesn’t want to go to Ixion, the island of ever-night, ever-youth and never-sleep. Retra is a Seal – sealed minds, sealed community. She doesn’t crave parties and pleasure, experience and freedom.

But her brother Joel left for Ixion two years ago, and Retra is determined to find him. Braving the intense pain of her obedience strip to escape the only home she’s ever known, Retra stows away on the barge that will take her to her brother.

When she can’t find Joel, Retra finds herself drawn deeper into the intoxicating world of Ixion. Come to me, whispers a voice in her head. Who are the Ripers, the mysterious guardians of Ixion? What are the Night Creatures Retra can see in the shadows? And what happens to those who grow too old for Ixion?

Retra will find that Ixion has its pleasures, but its secrets are deadly. Will friendship, and the creation of an eternal bond with a Riper, be enough to save her from the darkness?

Listen well, baby bats. Burn bright, but do not stray from the paths. Remember, when you live in a place of darkness you also live with creatures of the dark. (Goodreads summary)

Marianne de Pierres is a master of world-building.   An island cloaked in eternal night. Ancient gothic churches built on the side of a volcano. Pirates, Wardens, Ripers, Peaks, Baby Bats. Strange, terrifying night creatures. Whispered voices in the dark. The world she has created is rich, seductive, and frightening. Her descriptions, her crafted language, her tantalizing hints of things beyond what we’re allowed to see serve to make a world that seems enormous with incredible depth, history and innumerable secrets.  Without a doubt Ixion and the world that surrounds it  is one of the most intriguing I’ve ever been sucked into.

The plot of this book largely revolves around the mysteries of Ixion and the greater world that surrounds it, and it’s utterly gripping. I loved that it kept me constantly guessing. I was able to correctly theorize about some things that were going on, but de Pierres did an excellent job of keeping me happily in the dark until the time was right to reveal certain answers. The mystery she’s woven throughout Burn Bright was compelling and complex and kept me flipping page after page, eager to discover Ixion’s secrets.

Retra was a fascinating and compelling protagonist. She was easy for me to relate to and just made me care. Her discomfort at the beginning of the novel was easy to sympathize with, and from those first uneasy steps onto Ixion’s unfamiliar shores, Retra’s character really begins to grow into herself. One of the reasons she appeals to me was that despite the changes she undergoes as a character, she remains true to herself. Despite the outside forces that would pressure her, she has backbone and refuses to bend to anyone’s agenda. She fights injustice where she finds it, protects those she cares about even at great cost to herself. Even though she lives in a place where one’s selfish desires could completely overwhelm every other impulse, she has a self-control and a fierceness that I find admirable.

Perhaps one of the most interesting aspects of Burn Bright is what it had to say in regard to the idea of freedom. Teenagers from all over Retra’s world are fleeing a life of dissatisfaction in order to live without care and to party on the pleasure island of Ixion. In Retra’s case, the Grave promises little to her but a silent life of torment. Closely monitored, tortured, lonely and confined, Retra is little more than a prisoner in Seal South. Granted, the Seal compound is completely on the extreme side of the spectrum; however, the entirety of Grave practices a form of Asceticism, or a self-denial of pleasure, and enforces this lifestyle on all of it’s citizens. Retra is denied even life’s simple enjoyments – friends, music, even her mother brushing her hair – and it’s not hard to see why she longs for escape after her one friend – the person who made her life just slightly more bearable – her brother Joel fled to Ixion. However, though Ixion boasts few rules, “freedom” may come at a steeper price than Retra and her friends anticipate. Trading dystopia for the unknown darkness and the creatures that haunt it, is Ixion just another prison masquerading in shinier, prettier trappings? Beware baby bats, every pleasure has its price.

When it comes right down to it, the book is somewhat a statement on Hedonism vs. Asceticism. While I’m not quite sure where exactly de Pierres falls in this argument – as this is a trilogy and I’m sure her viewpoint will be made more clear as the story progresses – I personally view Burn Bright as a kind of cautionary tale about the dangers of extremes. When a society removes or restricts a person’s ability to utilize an essential piece of the human condition, for example the need for restraint or the need for pleasure, trouble is sure to abound. In this particular case extreme abstinence can be as dangerous as pandering to every whim and pleasure. Life requires balance. These two things cannot successfully exist without the other, and there is always a price to pay for visiting the extremes of either. Though I’m not sure if this was what the author intended to communicate, it was the message that came through to me.

De Pierres’ unique writing style took a little getting used to at the beginning of the book. I also found myself wishing for a bit more character development in the supporting cast, as I didn’t feel a particularly strong attachment to any of them except perhaps Suki. However, this is only Act One — the introduction — so I’m sure more character development is coming in the next two books.  Also, at times the dialogue felt a little stilted and awkward, and jarred me out of the story. Despite these small issues, the book was one I thoroughly enjoyed and I cannot wait for Angel Arias!

Overall, Marianne de Pierres has created in Burn Bright something that is original, fresh, intoxicating and excitingly terrifying. The world and story is one I’m sad I have to leave, so thank goodness the next book comes out in just under two weeks!

* Due to some mature content and substance usage, I would recommend this book for older teens. 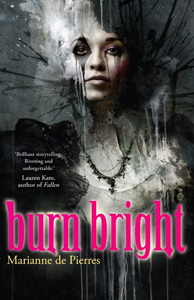 Bring Burn Bright to the US!