On Tuesday evening, Heather and I had the awesome opportunity to attend Rae Carson’s launch event for The Girl of Fire and Thorns at Cover to Cover here in Columbus! This book ranks among my favorites of 2011, and it was wonderful to get to hear her speak about her book, what inspired her to write it, and to actually hear her read her own work. Rae grew up reading fantasy, anyone with the middle initials R.R. she’s read, she said. She described how when she was young, she really became enamored with the idea of “The Chosen One” that’s extremely prevalent in the fantasy genre, how it meant you’re special and marked for something greater. However, as she grew older she began to realize that being chosen wasn’t an active thing, you didn’t really have any say in it. It’s a very passive thing, because you are the one being chosen by someone else. The Girl of Fire and Thorns was written, she said, to explore this and other tropes that are commonly found in fantasy. 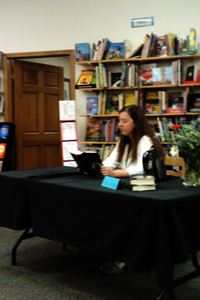 The Girl of Fire and Thorns has strong Spanish influences which Rae said came from a time when she was learning Spanish and working in HR in California. Many of the people who came to talk to her spoke Spanish and she had to learn to speak the language. There’s a strong religious element in this novel which derives it’s origins from the influence of the Catholic Church throughout history. It was just fascinating to hear her speak about how all these little things came together to create her story, and I’m so glad I got to go!

Rae reading parts of chapter one to the audience –> 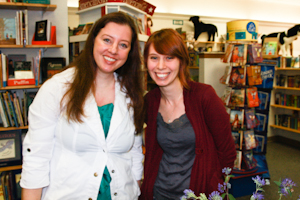 And because I’m a huge dork… Rae & me 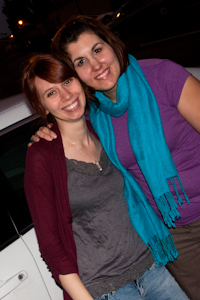 And just for kicks… one of Heather & I

If you haven’t gotten a chance to pick this book up yet, well here’s your chance. At the signing I not only picked up a book for me (yay!), but also an ONE (1) SIGNED copy of The Girl of Fire and Thorns for ONE (1) lucky reader!