It’s been several months since Vasilisa Dragomir’s coronation as the new Moroi queen. Despite overcoming incredible odds to claim the throne, Lissa still faces vehement, and sometimes violent, opposition to her fledgling reign from a growing number of Moroi dissidents. When it becomes apparent that Princess Jill Dragomir’s safety is being specifically targeted by a group of rebels, Lissa calls upon the Alchemists for assistance.

Assigned to Jill as liaison for the Alchemists is Sydney Sage – a former, albeit reluctant, ally of Rose Hathaway. Her assignment: pose as Jill and Guardian Eddie Castile’s sister while attending a prep school in Palm Springs, California. Keep the vampire safe from Moroi assassins. Keep the humans safe from the vampire. And above all, stay below the radar.

Already on rocky ground with the Alchemists regarding her recent escapades with Rose, Sydney needs this assignment to go perfectly in order to get back into her superiors’ good graces. However, with a boss who’d like nothing better than to see her return home in disgrace, a dangerous, intoxicating fad that’s overtaking the school, disturbing rumors of vampire slayers, not to mention the added complication of the confusing and infuriating Adrian Ivashkov, Sydney finds herself entangled in a growing web of mystery and intrigue. One she’ll need to unravel, if they are all going to make it out unscathed.

Most of you are probably familiar with the Vampire Academy series or have at least heard of it. If you’re like me, you’ve completely fallen in love with it. So when I learned that Mead was creating a spin-off series following the conclusion of Last Sacrifice, I was both wildly excited and a little apprehensive.

Only because so often well-intentioned spin-offs fail to capture that certain magic that made the original series so beloved. However, I needn’t have worried. Mead has created a seamless continuation to her previous series with Bloodlines. Nothing felt forced, and while major characters from Vampire Academy made cameos in Bloodlines it was the new main protagonists, Sydney and Adrian who stole the show. When I found out that Mead was continuing their stories in particular, I was ecstatic. I’ve always thought Sydney to be an extremely interesting character and Adrian stole my heart right from his first “Hey, little dhampir.” So, I’m very glad these two characters get their own story in which to shine.

Sydney Sage is so very different from Rose that it took a little getting used to at the beginning. Where Rose is all fire, passion and impulsive action, Sydney is calm, careful, rational, considers consequences but is also capable of innovating on the fly. She has grown up under the eye of a very strict father who demands a devotion to Alchemist duty above all else and who has shown very little praise or love. Never having felt free to make her own choices, to consider herself above her calling, she’s been conditioned to view the world through the Alchemists’ very narrow viewpoint: all vampires – Moroi and Strigoi – as well as their Dhampir counterparts are evil and unnatural and humans must be protected from them. However, after meeting Rose and because of her assignment with Jill, Eddie and Adrian, she might just find that the “truths” she’s been taught aren’t nearly so black and white as she originally thought and lines begin to blur. In the beginning, Sydney’s aversion to the Moroi and Dhampir seems a little inconsistent, but I’m still trying to figure out if that was intentional on Mead’s part.

Now onto to Adrian. Sigh. Oh Adrian. A notorious Moroi party boy, Adrian is the embodiment of sexy, casual indifference. However, his irresponsible attitude and quick-witted sarcasm conceal a man who is shouldering a lot of burden and a lot of hurt just under the surface. His strange new friendship with Sydney, the girl who’s been raised to believe he’s inherently evil, helps him come to certain realizations about himself and in turn he helps broaden her views as well. And when it comes right down to it, they both might find they’re not so very different from each other after all. I love Dimitri, really I do, but throughout Vampire Academy I fell in love with Adrian and I’m so glad to see him finally getting his own story.

Speaking of the story. I think it was really well done as Mead weaves several different plot lines throughout the book. However, it is perhaps a tad more predictable than I’ve come to expect in her writing. The outcome of this story became pretty apparent to me rather early on. Don’t get me wrong, I really enjoyed it, I just wish there had been slightly more shock and awe. Another thing I missed in this book was the very politically-charged atmosphere that became very prevalent in the Vampire Academy series, especially in the later books. Considering that the reason for Jill’s seclusion is motivated by political dissidents, I was hoping that there would be slightly more political intrigue in this story. It’s also not quite as action packed as I thought it would be. All that said, I really should stop comparing this to Vampire Academy, because if anything, successfully implementing these differences between the two series only demonstrates what a wonderful writer Mead is. The story really is page-turningly gripping. Just different than I was expecting.

The only other thing I’d say about the book is this, I listened to the audiobook version of Bloodlines. While it is wonderfully narrated, I was a little surprised to find that the narrator for the Vampire Academy series, Emily Shaffer, was brought on to do Bloodlines as well. Both books take place from a first person point-of-view, so for me – who was used to hearing this particular narrator as Rose – it took A LOT of time getting used to the idea that she was now playing Sydney. Just threw me for a loop.

Overall, Richelle Mead has created a promising, exciting and fresh addition to her Vampire Academy universe. I’ve become really invested in the characters from both of these series and I’m excited to see where Bloodlines will take them.  Well done, Ms. Mead. 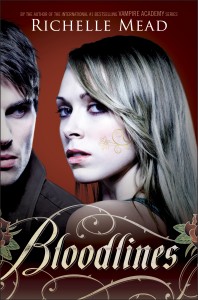