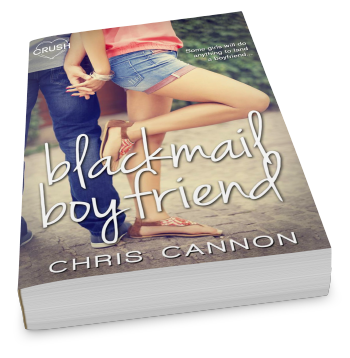 Sometimes, blackmail is the only weapon a girl has…

Haley Patterson has had a crush on golden boy Bryce Colton for ages. But when she hears a rumor that he hooked up with her she gives him a choice: be her boyfriend for a month to show other guys that she’s dateable—despite her overprotective and very intimidating brothers—or deal with the angry, cage-fighting boyfriend of the girl he actually did hook up with.

Bryce didn’t know the other Haley even had a boyfriend. He was just trying to get his ex off his back. And now, not only is he being blackmailed, he’s being blackmailed by an honor student. His new “girlfriend” has two three-legged dogs, her father mows grass at the country club, and she’s…well, difficult. And different.

I’m a bit of a sucker for those stories where a couple agrees to pretend to have a romantic relationship because of mutually beneficial reasons, only to discover that they’ve actually developed feelings for one another. And much drama ensues. And Blackmail Boyfriend delivers.

While there’s nothing particularly new or groundbreaking here — it’s your pretty standard drama fodder for this type of story — Haley and Bryce’s story is a cute one and still a fun read. Haley is smart and spunky, while Bryce tends to be more reserved and uptight.  Both are ridiculously stubborn, which makes it fun. When Haley coerces him into being her “boyfriend,” sparks begin to fly in more ways than one, and both their worlds start to turn a little upside down. Bryce’s character journey and realizations were interesting; however, I would’ve liked to see more of that maturation with Haley as well.  I liked her a lot, but she didn’t really grow over the course of the story. Also, while the ups and downs of their relationship/arrangement were expected, some of the drama was too contrived for my taste. But when all is said and done, all the drama did boil down to a pretty satisfying conclusion.

Overall, if you’re looking for a cute, feel-good romance, check out Blackmail Boyfriend.

Chris Cannon lives in Southern Illinois with her husband and her three dogs, Pete the shih tzu who sleeps on her desk while she writes, Molly the ever-shedding yellow lab, and Tyson the sandwich-stealing German Shepherd Beagle. She believes coffee is the Elixir of Life. Most evenings after work, you can find her sucking down caffeine and writing fire-breathing paranormal adventures or snarky romantic comedies.