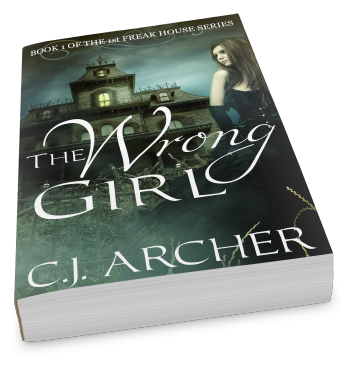 It’s customary for Gothic romance novels to include a mysterious girl locked in the attic. Hannah Smith just wishes she wasn’t that girl. As a narcoleptic and the companion to an earl’s daughter with a strange affliction of her own, Hannah knows she’s lucky to have a roof over her head and food in her belly when so many orphans starve on the streets. Yet freedom is something Hannah longs for. She did not, however, want her freedom to arrive in the form of kidnapping.

Taken by handsome Jack Langley to a place known as Freak House, she finds herself under the same roof as a mad scientist, his niece, a mute servant and Jack, a fire starter with a mysterious past. They assure Hannah she is not a prisoner and that they want to help her. The problem is, they think she’s the earl’s daughter. What will they do when they discover they took the wrong girl? (Goodreads summary)

Like gothic novels? Well, meet Hannah Smith. She and her superhuman, fire-starting mistress/betstie, Violet, are literally the gothic secret that’s hidden in the attic. Until one day in a case of mistaken identity, Hannah is kidnapped instead of Violet and is whisked away to an even more gothic mansion with even more gothicky secrets by people of unknown and possibly nefarious motives. Determined to keep Violet safe, Hannah plays along hoping to discover her kidnapper’s intentions, but she might just end up discovering more about herself instead.

The best way to describe this novel is X-Men meets Jane Eyre… which actually sounds like a pretty awesome concept. Unfortunately, while it started out pretty strong with an interesting premise and decent build up, the story began to unravel a bit for me around around the halfway mark. Confusing bits of plot, underdeveloped characters, and an unsatisfying resolution all contributed. Also the insta-love romance fell a bit flat for me as well. Jack is one dimensional, and his cageyness and temper… well, red flags. Let’s just say I wouldn’t be pursuing that if I were Hannah.

Overall, interesting and entertaining, but it didn’t quite deliver.