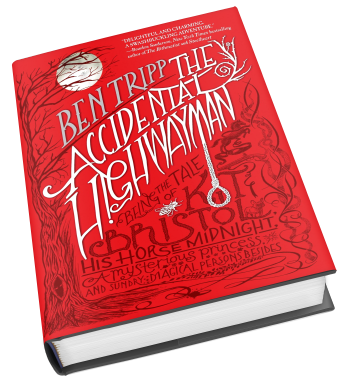 In eighteenth-century England, young Christopher “Kit” Bristol is the unwitting servant of notorious highwayman Whistling Jack. One dark night, Kit finds his master bleeding from a mortal wound, dons the man’s riding cloak to seek help, and changes the course of his life forever. Mistaken for Whistling Jack and on the run from redcoats, Kit is catapulted into a world of magic and wonders he thought the stuff of fairy tales.

Bound by magical law, Kit takes up his master’s quest to rescue a rebellious fairy princess from an arranged marriage to King George III of England. But his task is not an easy one, for Kit must contend with the feisty Princess Morgana, gobling attacks, and a magical map that portends his destiny: as a hanged man upon the gallows….

Yes. These are real words. Words that I didn’t know existed. Words that haven’t been used commonly in possibly centuries. Words that in large part, contribute to the undeniable charm of Ben Tripp’s faerie tale, The Accidental Highwayman.

(Aren’t they amazing? Don’t they just roll and trip right off your tongue. Go on. Pronounce one. Pronounce them all. I’ll wait. Sigh. Isn’t the English language weirdly grand?)

Indeed, in using these archaic words, Tripp also employs a somewhat 18th century writing style with which to tell his story. I, for one, thought this might be a bit off-putting, but rather, I found the style to be lovely, full of whimsy with a wonderfully understated and wry sense of humor. Tripp pairs this with his fantastic illustrations that are featured throughout, the combination of which makes this book absolutely charming.

Sixteen-year-old Kit is our narrator, a former circus performer who’s recently moved up in the world to the much more respectable vocation of manservant to the eccentric Master Rattle. But as fate (and plot) would have it, disaster soon strikes when his master comes home one evening mortally wounded. Kit discovers that Rattle is none other that the notorious highwayman, Whistling Jack. So much for respectability. Before he knows what’s happening, the hapless Kit finds himself unwittingly taking on the mantle of his employer, magically under oath to rescue a faerie princess, aiding a fledgling faerie revolution, and taking up his old circus act once again, as he is pursued across England by Whistling Jack’s arch enemy, the vindictive Captain Sterne.

Kit recounts his adventures, companions, and foes with such an honest, wryly humorous, and slightly romantic voice —  an enjoyable and funny perspective on human nature in all of its ridiculous, contradictory, wonderful glory. It’s also a faerie story.  Full of magic and monsters, of harrowing escapes and daring do, of persons bizarre and fantastic, of danger and adventure, with a pragmatic, everyman hero who’s uncovering a whole new world and who’s discovering that what he thought he wanted, may not actually be what he wanted or needs.

Indeed, respectability may be overrated.

The only major issue I had with this novel was with Princess Morgana. Her naivete and lack of magical proficiency didn’t quite measure up to her age and expected life experience.  She also was a bit too damsel in distress at times. However, that seemed to be less of a problem as the novel neared its conclusion, and I have high hopes for Morgana’s character in the next book.

All in all, if you like magic, adventure, danger, faeries, a hint of romance, whimsy, smart humor, a chance to beef up on your 18th century vocabulary, and a bit of a rollicking adventure (and seriously, who doesn’t?), then The Accidental Highwayman is the book for you.