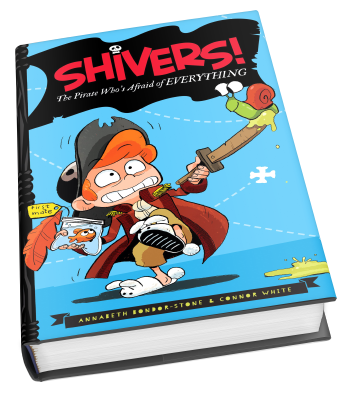 Meet Shivers, the scaredy-est pirate to ever sail the Seven Seas. Along with his best friend, Margo, and his loyal fishmate (yes, you read that correctly), Albee, Shivers battles a giant squid, discovers hidden treasures, and gets pooped on by a pigeon to save his parents from the clutches of evil. (Yep, that’s right: evil!) You’ll laugh, you’ll cry, you’ll never eat snails again. So put on your pantaloons, batten down the hatches, and join Shivers on his first (but still very dangerous) adventure.

A pirate who has to save his parents and big brother.

I liked this because it was an exciting adventure!

I love Shivers and Margo.  Shivers acts like a kid (but he’s a pirate). And Margo acts like a pirate (but she’s a kid.) It’s the opposite!

I also love Albee the fish.

I did not like Captain Pokes-You-In-The-Eye and Aubrey Pimpleton.

You can be brave even if you’re scared.

Yes. The picture makes me smile.

*FYI a fear of snails is called molluscophobia.