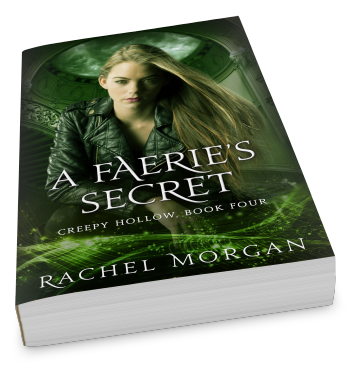 Calla Larkenwood wants nothing more than to be a guardian, but her overprotective mother has never allowed it. When circumstances change and Calla finally gets to join a Guild, she discovers guardian trainee life isn’t all she hoped it would be. Her classmates are distant, her mentor hates her, and keeping her Griffin Ability a secret is harder than she thought. Then an initiation game goes wrong, landing Calla with a magical ability she can’t control. She needs help—and the only way she can get it is by bargaining with the guy who just discovered her biggest secret.

Can I just say that I love that the Creepy Hollow series is not finished? It’s always bittersweet leaving a world behind when finishing a series, and I thought when reading The Faerie War (Creepy Hollow Book #3) that that was the last new adventure I’d have with Violet and Ryn in the world of Creepy Hollow. Thankfully, not so. Or not completely anyway. A Faerie’s Secret picks up almost a decade after the fall of Draven, but while Vi, Ryn and some other familiar faces make some cameos, this time the story is Calla’s (Ryn’s younger half sister).

Now seventeen, Calla Larkenwood desperately wants to train to become a faerie guardian just like her father was and her brother is. She wants to keep people safe from horrors like she once experienced at the hands of a cruel Unseelie prince. However, since the fall of Draven, the Guilds are now keeping track of faeries with Griffin abilities, and her parents are trying as hard as possible to keep Calla’s power a secret. Especially since she has trouble controlling it. Sending her to train at the Guild would be like sending her into the lion’s den.  But when it becomes clear that someone dangerous might already know and be after Calla, her parents finally agree that the Guild might, ironically, be the safest place for her.

But then again, maybe not.

When a guardian trainee hazing goes south, Calla ends up in the middle of something sinister while accidentally exposing her secret to a faerie of somewhat ambiguous allegiances. So safety becomes somewhat of a moot point. Plus, guardian training, not super safe to begin with anyway.

Continuation? Standalone? So, at this point, you might be wondering, Dear Reader, if you need to have read the first three books in this series. First of all, massive side eye going on in your general direction accompanied by an “Um…. YES?!” But fangirl answer aside, still I would say yes. The impact of the story would be greatly lessened if you jumped in on Book #4. Plus, you would definitely benefit from a better, broader knowledge of the Creepy Hollow world and what these characters have already been through. For example, if you read the original trilogy, you’ll have already met Calla. Seven-year-old Calla does play an important role in that story, and her backstory definitely comes into play in this one. But that said, if for some reason, you’re staunchly opposed to reading the previous books, Rachel also does a good job of providing just enough information for the uninitiated reader to get by if they don’t wish to go back and read the first three. *more side eye*

Calla. I just love her. She’s been through so much suffering in her seventeen years, and yet she embraces the vibrancy of life; choosing the “bright colors” rather than dwelling on the dark ones. She’s passionate, full of conviction, selfless, brave, compassionate, but also tough, totally kickbutt, and tends to wear her heart on her sleeve… among other places. I adore her.

I also adore Chase. A handsome, mysterious tattoo artist from the Underground, Calla’s ability doesn’t affect him like it does other faeries. Which makes him dangerous to Calla. However, seeing as she’s gotten herself in a bit of a “situation” with the super unofficial and definitely illegal trainee initiation, she finds herself in need of his knowledge and help. He’s strangely honorable, but not entirely forthcoming. Friend or foe? Well, that remains to be seen…

Calla & Chase. Whatever this is, I love it.

The world. Like I said previously, when I finished what I assumed to be the last book in the then-trilogy, I hated saying goodbye to the world of Creepy Hollow. Rachel has created this beautiful, enchanting place that blends the faerie world with very human concepts. A faerie world full of magic, mystery, and magical creatures, but with law enforcement agencies, bureaucracy, smartphone equivalents, and social media? It’s whimsical and charming, but also believably dark and dangerous when the plot swings that way. Which it does. Often. Creepy Hollow is a well-conceived and well-executed world, and I’m so glad I get to visit there a little longer.

Ok. I have to mention it. There’s one thing I love above all about A Faerie’s Secret, and I need to at least try to tell you about it, even if it’s in the vaguest of terms. I guess the only way I can describe it is that Rachel wove <insert “the coolest spoilery thing ever” here> into the story in such a organic, smart, stealthy way; a well-planned sneak attack. I had my suspicions about <insert “the coolest spoilery thing ever” here>. I was 86% sure I had this thing all figured out, but still Rachel kept me guessing.  And when the “AHA!” moment finally came, what she did with <insert “the coolest spoilery thing ever” here>  blew me away. I love when an author can turn the tables on me, which is something that doesn’t seem to happen too terribly often.  So if you like clever stories that’ll leave you jaw-on-the-floor gaping (and if you like faeries, and magic, and romance, and danger, and kick-butt heroines… and who doesn’t?!), this book is a good pick for you.

Also worth mentioning, the dialogue and descriptions. I’m a big fan. And I love how certain things from the original trilogy come into play in this fourth book.

Overall. In short, A Faerie’s Secret is clever, exciting and engaging; a wonderful and welcome return to the world and characters for established fans of the series, and a great introduction to Creepy Hollow for those new to it.  My favorite of the series thus far.