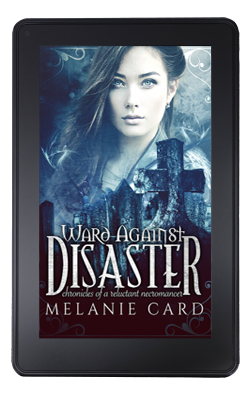 Ward de’Ath should be dead by now. Instead, he’s chasing after a soul-eating creature—that he unleashed— and is bent on stopping her before she slaughters more innocents. Fortunately, Celia Carlyle remains by his side, a nobleman’s gorgeous and deadly daughter, who is…well, dead.

Celia claims she’ll champion Ward wherever he goes, even when she thinks his quest is hopeless. He can only hope her pledge comes from her heart, and not because she’s bound to him through his magic.

When they enter Dulthyne, they stumble upon a dark power that threatens the entire town. Ward, with his unreliable necromancy, is determined to help but finds himself ensnared in the lure of white-hot magic…blood magic he struggles to resist. But if Celia’s love is a lie, it might just doom his soul to the dark arts forever.

*** This review is for the third book in a series. As such it will undoubtedly contain an element of spoilerishness, though I will try very hard to avoid it. ***

That… well, that was horribly wonderful.  Now, excuse me while I go cry some uglybeautifulhappysad tears.

But I’m beginning from my last impressions, when we should begin from the beginning. So here we go…

Following the grim events at the end of Ward Against Darkness, Ward Against Disaster picks up several days later  with Ward, Celia and Nazarius hot on the trail of the angry, power-hungry vesperitti, an undead creature that feeds off of soul magic. Ward has unintentionally unleashed this creature into the world, and Ward (being Ward) is determined to right this mistake before any more people die. The vesperitti’s bloody trail brings them to the city of Dulthyne, a city with a past steeped in dark magic; a city whose mounting tensions and unrest make it the perfect breeding ground for a new evil. When Ward’s compulsion to help others lands the three of them in trouble, Ward & Celia must once again take on a whole new subterfuge as Nazarius’s Quayestri apprentices to escape Dulthyne’s dungeons. As is typical, complications abound as Ward and Celia are now tasked with finding the source of the city’s disturbances, defeating the vesperitti, maintaining their cover, avoiding their growing feelings for one another, all while Ward tries to stave off the mounting allure of blood magic.

Cover. I don’t normally mention covers, but since this is literally the VERY beginning of the book, I’ll start here. While I loved the slight campiness and gothic vibe of the original covers, I have to say I LOVE the series redesign. The colors, the fonts, the consistency — it all appears just a bit more put together.  Fantastic job, Ms. Pelletier.

Ward. Though there are so many, many things that I love about this series, Ward definitely tops the list. His ongoing search for identity and self, his desire to do the right thing, his struggle to maintain his convictions in situations that make it increasingly hard to do so, his efforts to understand his magic (or lack thereof), the numerous emotional, spiritual and physical beatings he’s endured since meeting Celia — all of these things just make him very compelling, relatable, and empathetic.  He’s just a good guy fighting to stay good in a  world that would have him be otherwise. Card has done a fabulous job with Ward’s journey over the course of all three books, and particularly in Ward Against Disaster. Very well done.

Celia. Celia has also undergone a lot of introspective soul-searching since meeting Ward. Her journey has been interesting in that it’s almost the opposite of Ward’s. While Ward fights off the growing allure of darkness and corruption, Celia, the former assassin, has been influenced by Ward’s sense of morality, his willingness to do the right thing even when it costs. That doesn’t mean she’s totally reformed, not by a long shot. But she’s been given a second chance, however short it might be, and she’s becoming more self-aware, has grown something of a conscience, and has realized that maybe she wants different things out of this new, albeit undead,  life. Her ongoing quest to find out exactly what Ward did to her when he brought her back is also interesting. And that’s all I’ll say about that.

Romance. Ms. Card, you are a master of the slow burn. Holy angst, Batman. The growing attraction and awareness  between Ward and Celia as they try to deny/realize their feelings for each other is just so very, very frustratingly, agonizingly fantastic.

Nazarius. I haven’t quite decided what I think about Nazarius just yet, but I do find him to be a very intriguing character.

Story & World. This series just keeps getting more and more exciting, the stakes going ever higher. Ward Against Disaster rarely has a calm moment. From the first page, Ward, Celia & Co. pretty much move from one danger directly to another. Their situation growing ever more tenuous and dire as they seek to maintain subterfuges, as they withhold truths and keep secrets, as they are uncertain of their allies, as they experience failure, discouragement and self-doubt, and as evil encroaches ever nearer. Card expertly weaves and develops her story, connecting all of her new and ongoing points together, all the while maintaining the plot’s rapid pace. It’s compelling, it’s engaging, it’s good storytelling. And that ending… GAH! *clutches heart*

Card also expands this curious, fantastical world just a little more. Dulthyne, Brawenal, Brothers of Light, The Goddess, Quayestri, Necromancers, Innocroesti, Vesperitti, Dark and light magic, frequent references to histories and people and places — it all gives Ward & Celia’s world a depth and believability without ever being too expository. It’s a fascinating world that I’m dying to know more about. The only thing that would make it better would be a map. *hint hint*